What Kind Of World Do You Want To Live

If we are able to create a world of our own we would that world with everything we like and erasing everything that we dislike. But that world could change based on our ages. So like every normal people I have my own world in my mind since I was little. Since my dream is to become a scientist I want to be the creator of every single thing in my own world. I want to protect my own world like “Super Man” protects the earth.

Don't use plagiarized sources.
Get Your Custom Essay on What Kind Of World Do You Want To Live Just from $13,9/Page

And I want to erase every disease , poverty and everything that is bad for the people . And for the first thing for poverty I think everyone should have a role to afford them for a standard living . As I am living in a developing country unlike America , I’ve seen many people sinking deeply in poverty . But for the rich people it is the opposite . They are becoming richer and richer but the poor people are becoming poorer and poorer .

So I would like the people in my world live in peaceful and a standard lives . And I would also like to live in a world where there is political stability where there is no war between countries and countries. I don’t even want a single conflict happening in the country .

Nowadays One of the biggest countries in the world is at war with another country . United States Of America is fighting against the Muslim racists who’s butchering every single thing that does not obey them. And now we have to worry about those people terrorizing the whole world . Terrorism and killing people for no absolute reason is just repulsive and I, probably adding millions of others, cannot see myself endure this any longer. My view on terrorism has been amplifies by one million after I’ve heard all the things happening with the US army and ISIS. Seeing all these people that got killed and all the families that got destroyed just brings me to the conclusion that these people have no respect, no humanity, no heart, no nothing. These people are worth nothing , not even a penny to me. So I would like to live in a world where we don’t have to be worried about health care, education , business and much more. And I also don’t like how men are treating women in the Muslim countries . Women should be respected since they give birth to their children.

But they treated the opposite to the women who gave birth to their children and make them worship like God . All men should always be gallant and should always treat that woman with respect. The woman is important because of he ability to bring children to life. Personal responsibility is in the list because you are always responsible for you won actions, not anyone else . And for the thing that is happening nowadays in 21st Century is the human being has commissioned to create better cars, smart phones, realistic video games, powerful computers and weapons of mass destruction. A fierce technological revolution that has made man forgets entirely his humanity, his values, the abstract side that goes beyond the banalities and the desire for power. In the 90s children used to play in front of the neighborhood happily and lively . But now the children born in the 21st Century only have their eyes stuck to the computers and play computer games for hours .

And the young adventurers who used to explore the fields , researchers who used to keep in touch with the nature are just looking at the cell phone’s screen for hours and researching up on the net. For my opinion , using Internet is not a really bad thing to do. But using the internet , playing games for the whole day that you usually forget to study is not a good thing to do. Because of this even our relationship with nature has been affected, man has lost the ability to watch the sunset and walk in the rain, man has lost the ability to appreciate the small and significant details. After that complex virtual sea, thousands of stories that happen are ignored.

For the conclusion I would love to live in a world where there is no serious diseases , and wars where thousands of people would lose their lives or poverty that would make mankind live in despair. I don’t want to live in a world like 21st Century where most of the people are just looking at the cell phone’s screen or the computers . I would just love to stay in a world with peace where I can just live like a normal people peacefully and lively .

What Kind Of World Do You Want To Live. (2016, Jun 17). Retrieved from https://studymoose.com/what-kind-of-world-do-you-want-to-live-essay 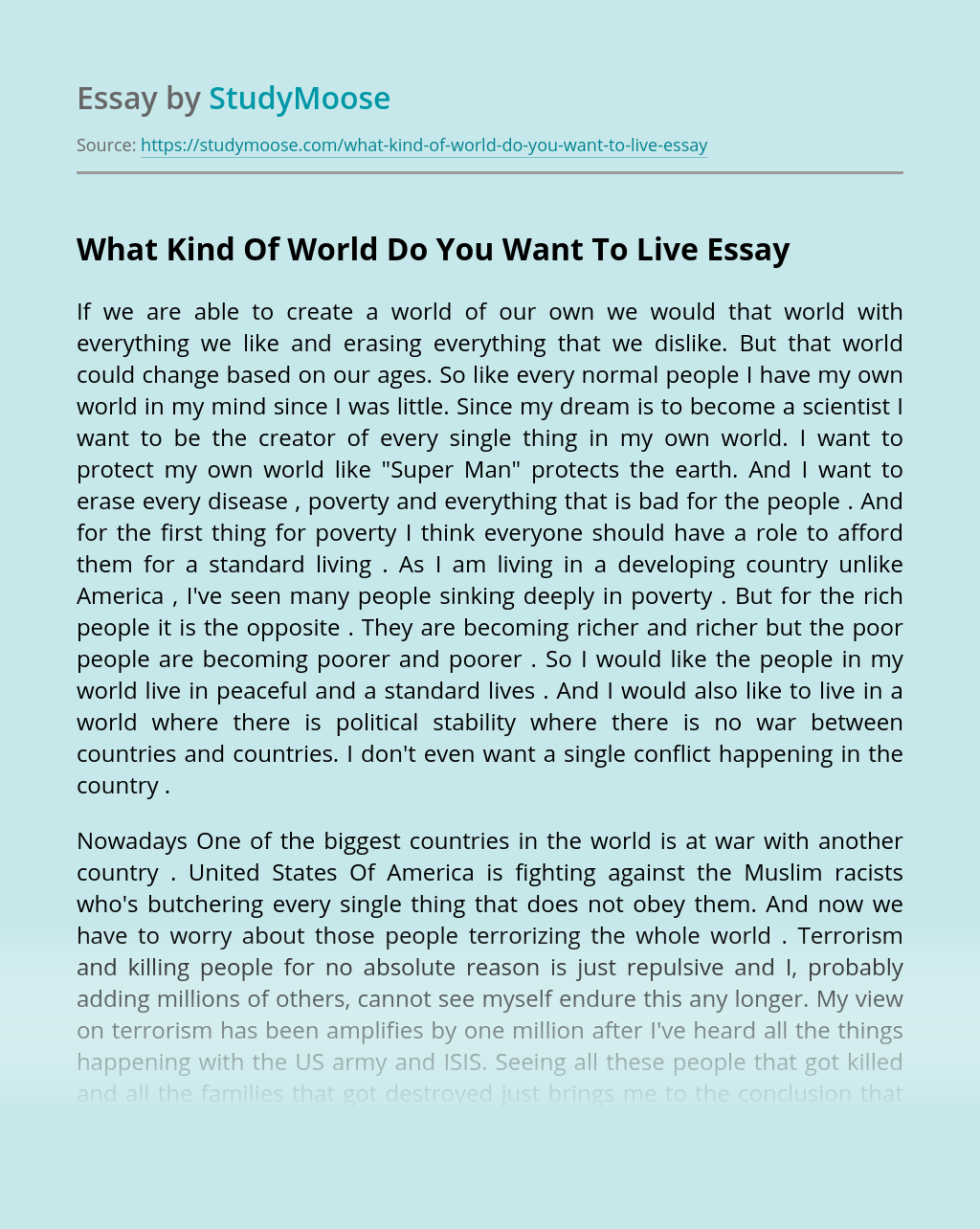 Evaluation of the Effects of Poverty in Alexandra Informal Settlements

A vast majority of people in the World’s population live in extreme poverty. Poverty is multi-faceted. It can be linked with hunger, unemployment, exploitation, and lack of access to clean water, sanitation, health-care or schools. It can be about vulnerability to crisis and homelessness. While clearly many of these issues are related to not having...

The Great Gatsby: Symbolism in The Valley of Ashes

The Great Gatsby by F. Scott Fitzgerald has become a literary classic of the 1900’s. This book, set in the 1920’s, takes place in Long Island Sound and New York. the valley of ashes is found between West Egg and New York City, however in contrast to East and West Egg’s rich preeminent society, the...

Get Essay
Why Was the Haiti Earthquake so Deadly?

Haiti’s devastating earthquake of 2008 brought havoc upon many, buildings were obliterated, and the lifestyle of Haitians collapsed. The earthquake which dawned on Port-au-Prince (Capital of Haiti) at 4:52pm locally, and 9:52pm GMT on Tuesday 12th January, 2010 was so indescribably deadly due to these main points: The money/economy/leadership, Haiti’s geography, and lifestyles. Over the...

In this essay I’m going to talk about this question. Since this is a very wide subject I could talk about only a single country or a single issue, but I will try to discuss about the whole aggregate. Some of the main points are starvation, education, child labor, safety and human rights. These issues...

“Social inequality is a more pressing socio-economic challenge than poverty in contemporary South Africa.” South Africa is one of the most unequal countries in the world, but not the poorest (with reference to income). We can see that the inequality in South Africa has worsened over time by looking at the country’s Gini Index score....