What is the future of English as a global language?

What is the future of English as a global language? The world is changing so rapidly, from national politics to people’s livelihood. Definitely, language is one of the most important characteristic among there. English, which is considered as the world language at present, facing with sophisticated problems. Actually, the situation could persist on till the future. In my view, the future of English as a global language may be as the concave and convex sides of a nutshell, it is hard to foresee that.

Don't use plagiarized sources. Get your custom essay on
“ What is the future of English as a global language? ”
Get custom paper
NEW! smart matching with writer

Someone hold the opinion that the future of English to be a global language is of a high possibility, they think that English has a bright future. Others have a different point that with the development of the world, English may have a tough way to go through, the future of English is tortured.

A major reason of the future of English could be a global language is that the trend of speaking English will continue going on.

First of all, all the people from different non-native-English countries know that learning English at a very early age is very important because they think English could be a cornerstone of their later life. In China, lots of parents send their children to the English learning agencies since the children even can’t say Chinese fluently.

It is an interesting phenomena in a country which was an ancient civilization in the past thousands of years. Chinese people put the same attentions to English as well as Chinese.

That means English has been a basic skill than a curriculum, it is the same important as their native language. Another phenomena is that large amounts of youth go abroad to study in native-English countries like UK, US and Canada.

The cost of studying in foreign countries could be very expensive and the life in a totally strange place could not be easy, but they go to these English countries without hesitation. What are they seeking for? Because they think that the experiences of studying abroad could be a highlight when they apply for employment. And the training in English environment could give them more opportunities especially for those who want to work for foreign enterprises, they could be more competitive. Last but not the least, the world has becoming more and more integrated because of the globalization. In the morning we could be at Russia, in the afternoon we can be at Brazil.

As the globalization is happening in every corner of the world, nowadays, our planet is more like a village, people from different continents, different cultures and different countries all come together. The scientists exchange their ideas and technologies, the businessmen trade all kinds of goods over the world, governments talk with each other. English as the best communication tool has been used widely. With these phenomenon, we can see that in the future, English could be the global language and everyone in the world could say some English words or sentences.

Other people hold an opinion that the future of English could be tough as they look in this argument a different way. As lots of race have their own language, so these race would not see their languages become extinction without doing anything, they will protect their own culture and languages like the protection of the endangered animals. For example, in Shanghai, China. As the rapid development of urbanization, lots people come from different areas and settle down in Shanghai. The children growing up in Shanghai are not able to say any Shanghainese but Mandarin. So, other languages will be still exist with English. This will cause a result that if someone who can say the local language and both English will be more competitive than the persons who can only speak English. Even we have to admit that English is very popular around the world, the future of English is hard to say.

Meanwhile, the influences of different cultures are also can’t be ignored. Nowadays, many people in western countries like the cultures from Asia or some other places like lots of immigrants from Asia settle down in the US who also brought their own cultures an languages. So when the people of native-language countries prefer the Asian culture which they think is very cool that they may learn some Asian language as well. We can see that lots of American can say some Mandarin or Cantonese. As a result, no one can forecast that which language could be the global language in the future, maybe, 100years later, Chinese or Spanish will control the world as lots of people use this kind of language. So, some people think that the future of English to be a global language is hard to say.

What is the future of English as a global language?. (2016, Apr 26). Retrieved from https://studymoose.com/what-is-the-future-of-english-as-a-global-language-essay 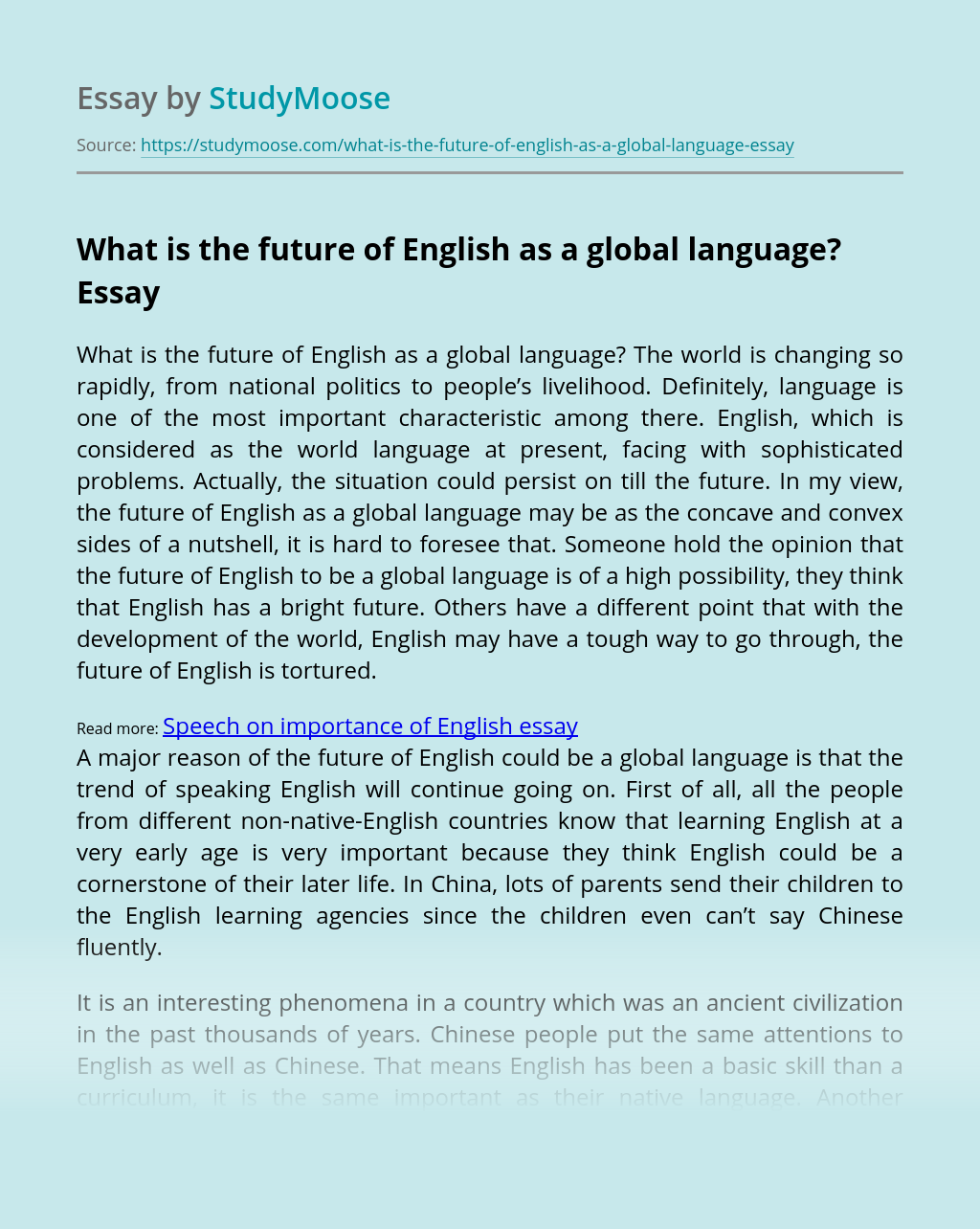