What Is the Effect of the Rapid Evolution of Technology in Today's Society?

Technology is the new black. By that I mean, of course, that technology has become the necessity in the closet of 21st century society. It may seem hard to believe that just a decade or so ago the average person couldn’t make a phone call from their home, or listen to their entire album collection in the most isolated spot in Yellowstone Park. Go back a little further and if there was a television show you wanted to watch, but you had to be somewhere away from a TV at the same time you were out of luck until it was repeated.

Don't use plagiarized sources. Get your custom essay on
“ What Is the Effect of the Rapid Evolution of Technology in Today’s Society? ”
Get custom paper
NEW! smart matching with writer

The primary difference is that throughout most of the 20th century when the technological age really began, the inventions meant to make life easier were allowed to mature and be perfected before becoming outdated and replaced; that is most certainly not the case today. The most obvious example is the device that is increasingly becoming the symbolic icon of 21st century technology, the telephone.

It is worth remembering the sole telephone used to place 99% of all calls in the early 1990s was essentially not particularly different from the same device that was used to make 100% of all phone calls in 1920s. By contrast, consider that a cell phone produced in 1997 is obsolete. After all, you can only use those cell phones to make calls; you can surf the internet or watch television or listen to music or make movies. The pace at which the technology can be developed and successfully marketed far outstrips the pace at which it can be perfected.

The result of this rapidity in the workplace has been that neither employer nor employee has enough time to become proficient in their respective needs for a product before being tempted with an updated or enhanced version. Technology almost certainly can be said to affect production today more than it affects management or labor. Both ends of the means of production must rely upon the competent production of new devices and must put their faith that what is delivered into their hands ill immediately fulfill the promise of its designers and marketers with no need for sharp learning curve.

The technological advancements in the production of literally every product manufactured today are becoming more and dependent upon the advancements in design of business technology and the ease of their facilitation. If a new product cannot essentially be learned and put to use right of the box, it will quickly be deemed a failure that is known throughout the community instantly as a result of the advancements in communication technology.

What Is the Effect of the Rapid Evolution of Technology in Today's Society?. (2016, Nov 05). Retrieved from https://studymoose.com/what-is-the-effect-of-the-rapid-evolution-of-technology-in-todays-society-essay 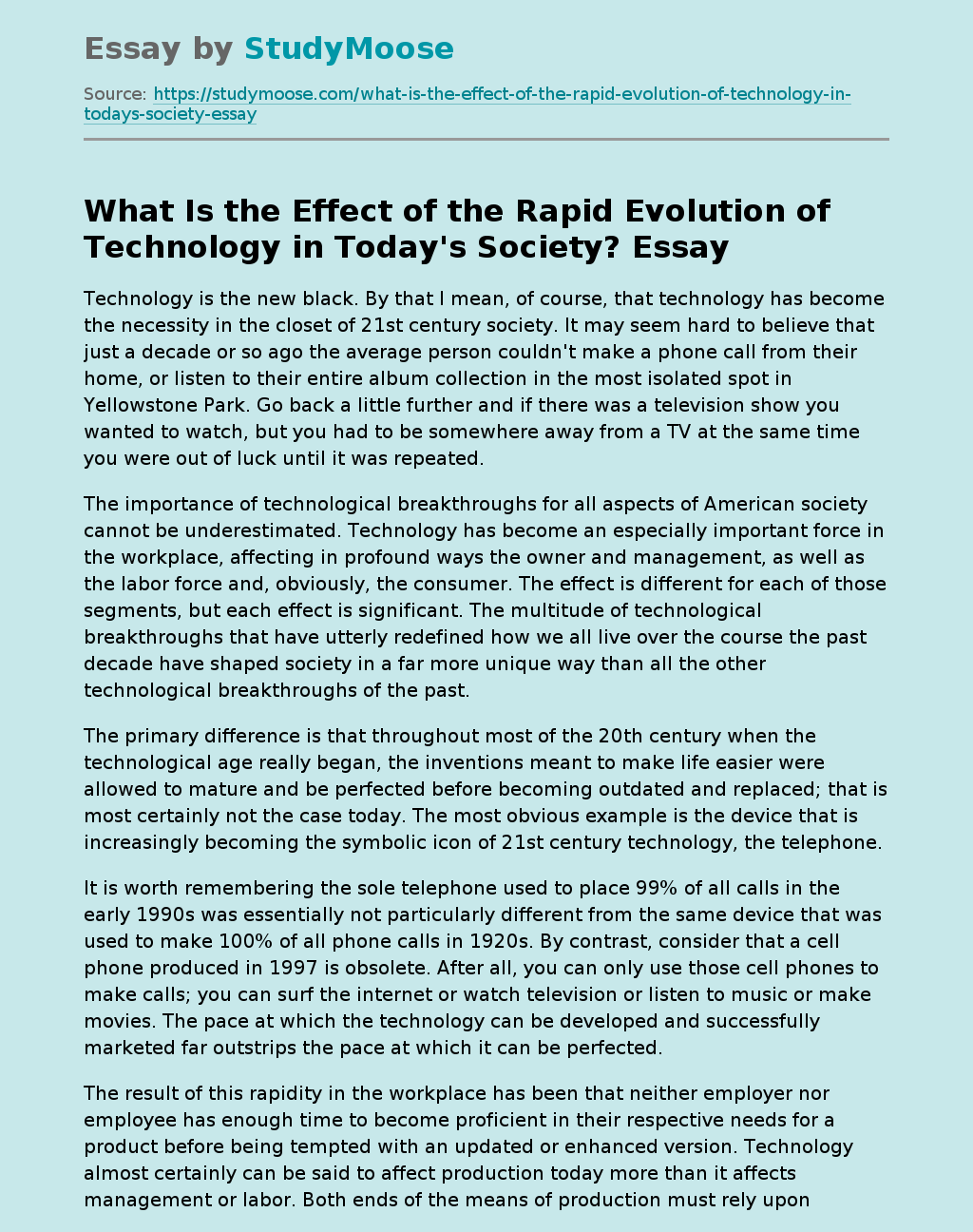