Assignment About What Is Social Exclusion?

For example, it doesn’t really explain why individuals are excluded due to their race or sexuality etc. One of the debates regarding social exclusion is whether it is the fault of the excluded, or a result of the social system (structural phenomenon). Both Marx and Weber saw social exclusion as a result of the social system, with people attempting to secure privileged positions for themselves at the expense of the least well off. However some would argue it is the behaviour of certain individuals, which leads to them, being excluded from society, whether it be those living in poverty, who rely on state benefits and refuse to work.

Don't use plagiarized sources. Get your custom essay on
“ Assignment About What Is Social Exclusion? ”
Get custom paper
NEW! smart matching with writer

Or whether it be the upper classes that choose to exclude themselves from the rest of society in the lifestyles they lead. In terms of being used in a more modern sense, social exclusion originated from France, where their system of social insurance relies on employed individuals donating part of their salaries to special funds, which in turn will pay them generous benefits if and when required.

Hence ‘Les exclus’ was the term used to refer to those who fell through the social insurance net.

In the 1970’s, disabled people, lone parents and the uninsured unemployed young adults were the most common to fall through the net (Evans 1998). There has been an increase in those falling through the net since globalisation, deindustrialisation, an ageing population and changing labour markets has destroyed the old insurance system. This has left people living in Christian democracies having to rely on basic and often inadequate assistance from the governments.

This resulted in the establishment of the European Observatory on social exclusion, and to the focus on ‘social inclusion’ resolutions at EU level.

Byrne (1999) believed social exclusion was a “necessary and inherent characteristic of unequal post-industrial capitalism founded around a flexible labour market”. Hence there is no permanent underclass, but people act as a reserve army of labour, who change places with those in low status employment, but also serving to keep the power of the working class in check (Understanding Social Exclusion, p2). Under conservative government in the 80’s and 90’s, the focus was on individuals to support themselves, rather than rely on the welfare state.

Finally, on a global level, international trace, migration and climate change can all influence social exclusion. All levels interact and contribute towards each other in various circumstances. For example, an individual is influenced by their family, the community and both national and global context, in the decisions they make and opportunities available to them. This model reflects the complexity of social exclusion, and the difficulties in trying to establish the cause for it, when so many different factors are involved on different levels, which interact with each other.

Despite there being a lot of ambiguity in the term, as Peters (1996) says, “Some reject the term entirely on the grounds that it is ‘highly problematic'”, the most important thing is that British government is looking at ways to help those who are socially excluded through the social exclusion unit. I think social exclusion is a not only complex as a term to understand, but also a complex issue to resolve, which requires long term planning rather than short term solutions, if the numbers of those being excluded is to be reduced.

At the same time, there is only so much the governments can do, if individuals choose to exclude themselves in terms of anti-social behaviour etc.

Assignment About What Is Social Exclusion?. (2020, Jun 02). Retrieved from https://studymoose.com/what-is-social-exclusion-10468-new-essay 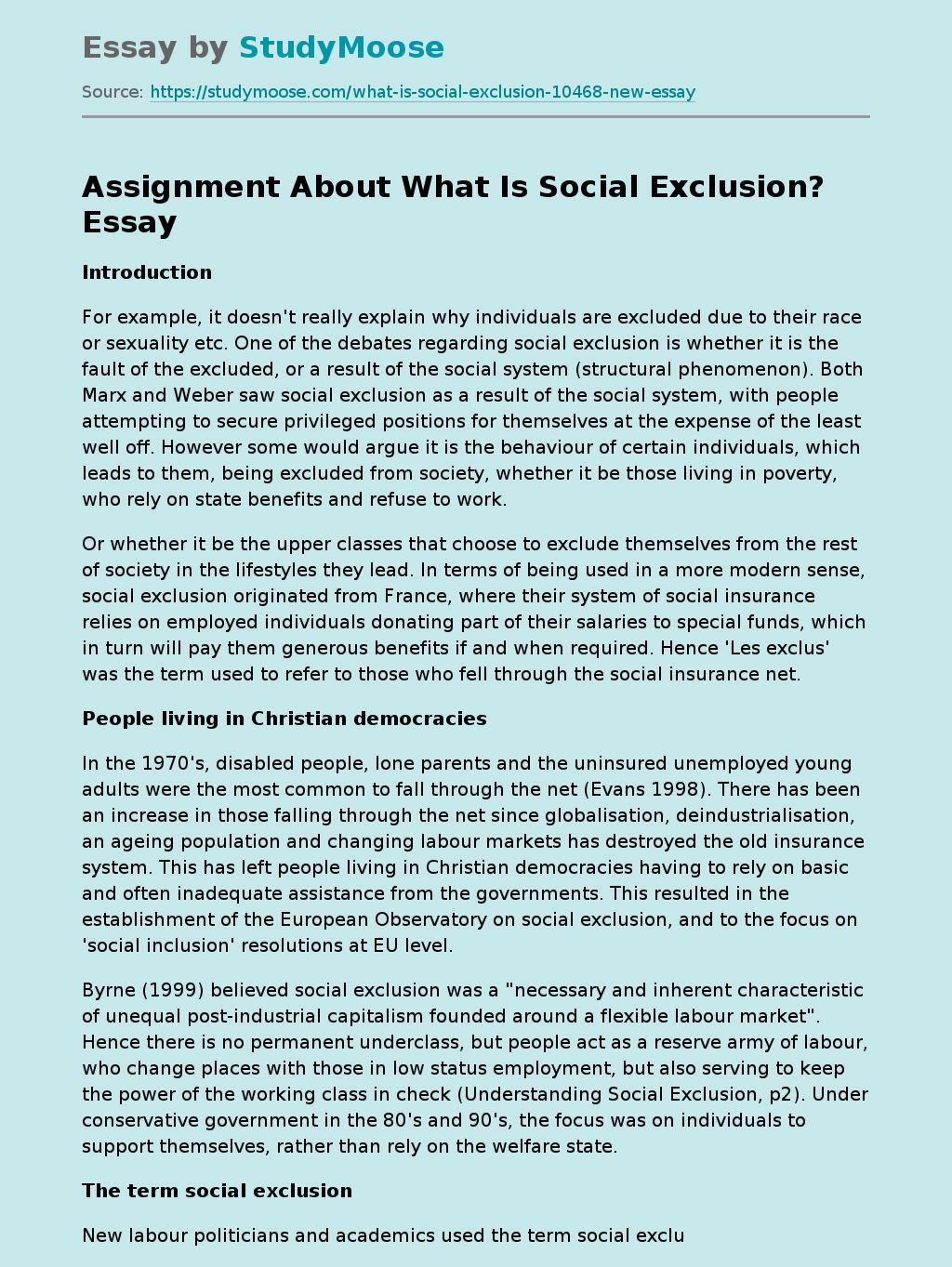