What is Organic Food, and is it Better Than Non-Organic?

The organic movement began in the early 1900s in response to the shift towards synthetic nitrogen fertilizers and pesticides in the early days of industrial agriculture by a relatively small group of farmers.

Don't use plagiarized sources. Get your custom essay on
“ What is Organic Food, and is it Better Than Non-Organic? ”
Get custom paper
NEW! smart matching with writer

These farmers came together in various associations: Demeter International of Germany, which encouraged biodynamic farming and began the first certification program, the Australian Organic Farming and Gardening Society, the Soil Association of the United Kingdom, and Rodale Press in the United States, along with others. In 1972 these organizations joined to form the International Federation of Organic Agriculture Movements (IFOAM). In recent years, environmental awareness has driven demand and conversion to organic farming. Some governments, including the European Union, have begun to support organic farming through agricultural subsidy reform.

Organic production and marketing have grown at a fast pace. The growth has been continuous, driven by increasing ecological concerns, and, importantly, heightened consumer demand.

As fast as growers and processors have put products on the market, consumers have put them into their shopping carts. Organic food to most shoppers and they’ll likely responds that it’s too expensive. For the most part, they’d be right. A recent Consumer Reports study found that organic foods cost 47% more, on average, than conventional foods.

As such, it’s not surprising that Whole Foods, the grocer most associated with organic and natural food offerings, is often referred to as “Whole Paycheck.” To combat that reputation, the company just announced that it will be launching a chain of less expensive stores aimed at price-conscious Millennial shoppers. Whole Foods didn’t specify when it was opening the new stores or where they’d be located. So what do you do in the meantime if you want to buy organic for less? For starters, it’s important to understand that prices on many organic items can be the same as or even lower than the prices on their conventional counterparts.

The Consumer Reports study found this to be true on several organic products including lettuce, carrots, maple syrup and olive oil. Kiplinger’s independent research found that even including organic milk, chicken broth, and peanut butter. In other words, saving money on organic foods doesn’t just come down to what you buy but where you buy it. Try shopping at these places to keep costs down. In truth, organic foods and products can absolutely be more expensive. Some organic foods, especially if out of season, can cost twice as much, with name brands running even higher at times. This can make it seem nearly impossible, or just impractical, to buy. But there is a reason to make the splurge if possible – organic options can also be much better for you than conventional produce, packaged food and traditional products. They contain less traces of pesticides and chemicals that are known to disrupt hormones, your gut health, and cause inflammation. All of these things can cause huge stress on your body and throw off the balance within your bodily systems. All of that means less health and more illness. There are also studies that show organic options contain more of the good stuff, like anti-oxidants, phytonutrients and enzymes, which make your body thrive. Plus, the organic options usually taste better, which means you eat more, but you also eat better.

On average, organic food contains increased levels of many key nutrients which are essential for human health. Both US and UK Government statistics indicate that levels of trace elements and minerals in fruit and vegetables fell by up to 76% between 1949 and 1991. Organic food doesn’t contain food additives which have been linked to health problems such a heart disease, asthma, osteoporosis, migraines, food allergies and hyperactivity. Among the additives banned by organic regulations are hydrogenated fats, aspartame and monosodium glutamate, and all artificial colorings, flavorings and sweeteners. Pesticides are routinely used in conventional farming. Residues of these pesticides are regularly found in a high percentage of fruit and vegetables, and in 2004 the European Commission stated that a risk to human health cannot be ruled out anymore. I determined the difference in organic and nonorganic food. Genetically modified organisms or crops are not allowed under organic standards. There is growing concern about the high use of antibiotics on farm animals and the possible risk to health. Organic standards prohibit the routine use of antibiotics. Compare this with the millions that tax payers fork out for removing chemicals from drinking water. This is mainly as a result of the pesticides and fertilizers used in conventional farming.

While it might not seem like the first place to go, big chain stores, like Target, Costco and even Wal-Mart, offer a large variety of organic foods, especially in the packaged and frozen aisles. The produce selection isn’t huge, but some of the basics (apples, bananas, spinach) can usually be found, in either a larger size or a cheaper price than your average store. The packaged foods and frozen sections contain even more organic options, so you can stock your pantry and freezer full of items you can use to round out your organic meals and snacks. In the aisles, you’ll find plenty of organic teas, seeds and nuts, flours, sugar, coffee and even wine. You’ll also find a variety of organic snack food and bread, as well as smoothie supplies and side dishes in the frozen section. Many of these stores also offer organic milk, yogurt and eggs. Some stores even have extensive organic store brands (Target, Costco), so you can save even more money on your organics and have a wide variety to choose from.

What is Organic Food, and is it Better Than Non-Organic?. (2020, Nov 12). Retrieved from https://studymoose.com/what-is-organic-food-and-is-it-better-than-non-organic-essay 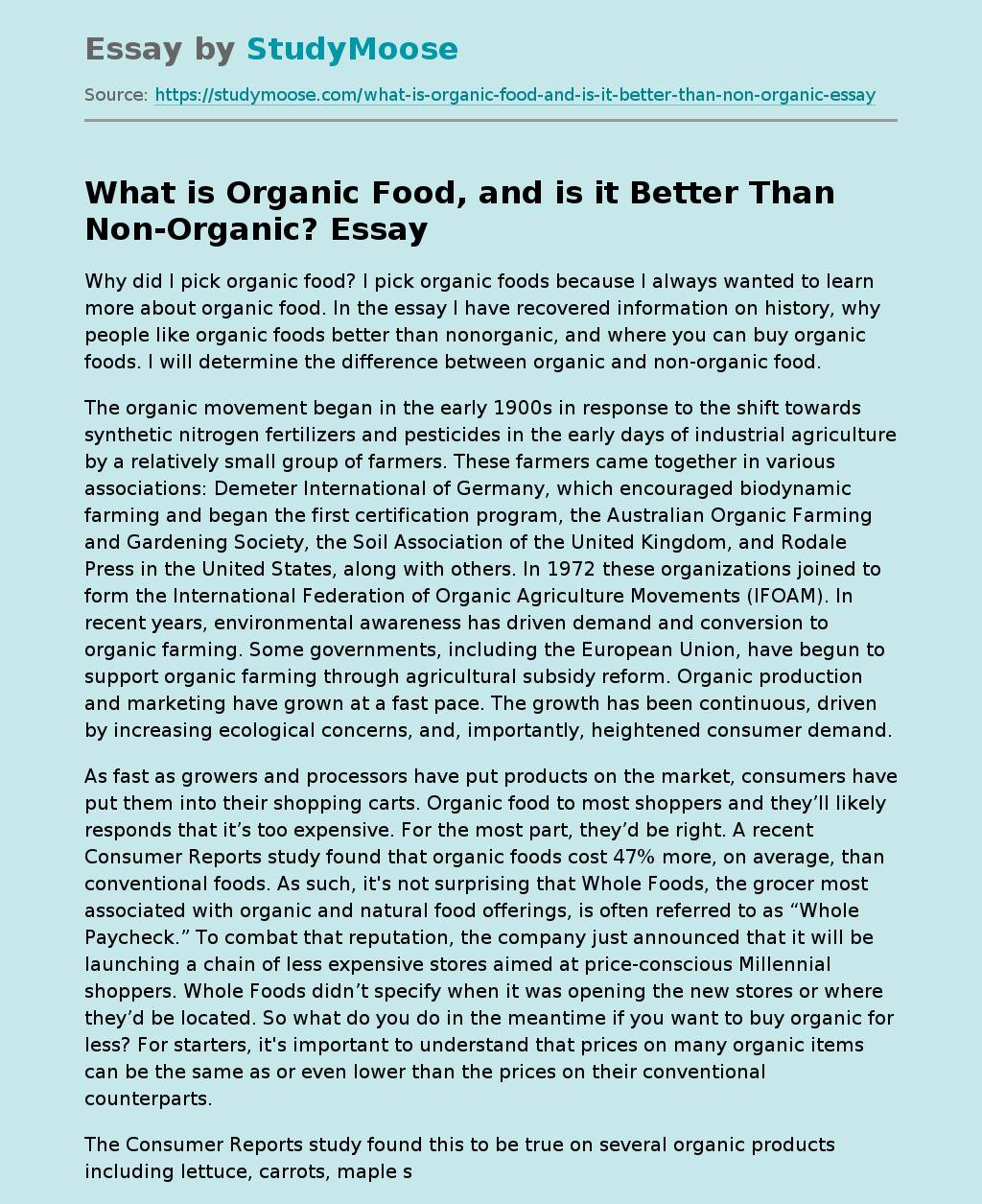