What is Mood Disorders?

Personality disorders include anti-social personality disorder, people with this can be able to act witty and charming but often lie cheat and steal and have no feelings of guilt or remorse, they often break the law and can be manipulative , and arrogant often feeling angry too, during childhood they were probably involved in cruelty to animals and acts of arson.

Don't use plagiarized sources. Get your custom essay on
“ What is Mood Disorders? ”
Get custom paper
NEW! smart matching with writer

Borderline personality disorder can cause long term periods of unstable emotions, constant shifting of feelings about others, one day they may be friends and get on well with another individual and the next day this may change.

They tend to view things as either all good or all bad, they often have feelings of abandonment and boredom and often are prone to taking overdoses and self-harm.

Anxiety disorders include panic disorder and phobias. Panic disorder is where the person reacts to certain things, situations or places, for example they may not like to be in busy places such as pubs or shopping centres, this can fill them with feelings of dread and anxiousness and can cause them to start sweating and increase their heartbeat, often they will avoid a place or situation because of this anxiety.

Psychotic disorders. People with psychotic disorders often lose touch with reality, they usually experience hallucinations, often hearing voices and seeing things, they also can be delusional often believing things which are not true. Substance related disorders; include medical conditions that can be directly attributed to the use of a substance e.g. alcohol, cannabis, opioids like morphine, inhalants like glue or paint thinner, stimulants like cocaine or amphetamines.

Eating disorders include Bulimia (or bulimia nervosa) is a serious mental illness. It can affect anyone of any age, gender, or background. People with bulimia are caught in a cycle of eating large quantities of food (called bingeing), and then trying to compensate for that overeating by vomiting, taking laxatives or diuretics, fasting, or exercising excessively (called purging)., Anorexia (or anorexia nervosa) is a serious mental illness where people are of low weight due to limiting their energy intake, The way sufferers see themselves is often at odds with how others see them they often have a distorted image of themselves, and think they’re larger than they really are. Pica is an eating disorder that involves eating items that are not typically thought of as food and that do not contain significant nutritional value, such as hair, dirt, and paint chips.

What is Mood Disorders?. (2016, Nov 24). Retrieved from https://studymoose.com/what-is-mood-disorders-essay 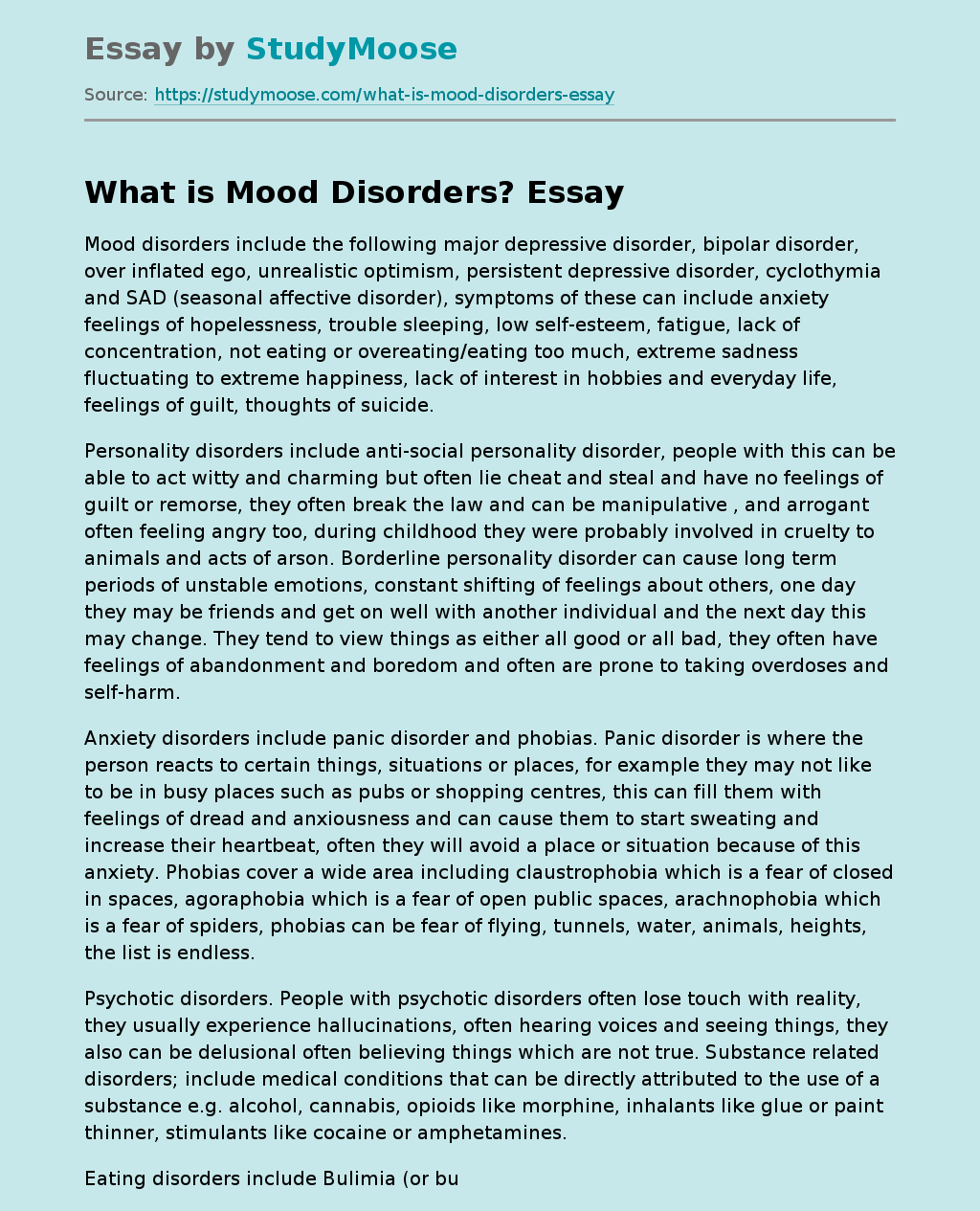