What is meant by style and stylistics?

Style is concerned with the artful expression of idea and stylistics is the bridge that links the idea of style to the analysis of literary texts through the tool of linguistics. The 19th century, that witnessed evolution in the field of biography, historiography, anthropology and others, could not remain unattached to immutable linguistic and stylistic norms in literature. Linguistic study was esoteric in the beginning and severely criticized as, “pretension of scientific accuracy, obsession with an extensive; cumbersome and recondite terminology; display of analytic techniques; scorn of all that is subjective, impressionistic, mentalistic.

Don't use plagiarized sources. Get your custom essay on
“ What is meant by style and stylistics? ”
Get custom paper
NEW! smart matching with writer

”(Fowler 1) But the struggling efforts and revision of opinions made it possible for linguists to make their study acceptable even by literary critics.

Linguistics gave birth to another branch named stylistics. For stylistic interpretation, a stylist views the whole text as a unit, not as a string of sentences, while a linguist’s concern is to make out the link between the sentences. The major difference between linguistic and stylistic study is that “whereas the maximum unit in linguistics is the sentence, larger unit, the text, serves as the basis of stylistic analysis.

”(Fowler 17) The concept of style belongs to the very beginning of literary thought in Europe. About style Abrams opines: Style is the linguistic expression in prose or verse – it is how speakers or writers say whatever it is that they say. The style of a particular work or writer has been analyzed in the terms of the characteristic modes of its diction, or choices of words, its sentence structure and syntax; the density and types of its figurative language; the patterns of its rhythm, component sounds, and other formal features; and its rhetorical claims and devices.

A stylistician studies the style and method that an author uses in his artistic creation. It applies the amplification of linguistics to approach literary texts – to identify the choices and ways a writer uses in weaving a text. He further says about stylistics, “Since the 1950’s the term stylistics has been applied to critical procedures which undertake to replace subjectivity and impressionism of standard criticism with an objective or scientific analysis of the style of literary texts.”(283) Another critic Katie Wales asserts that “stylisticians want to avoid vague and impressionistic judgement about the way formal features are manipulated. As a result, stylistics draws on the models and terminology provided by whatever aspects of linguistics are felt to be relevant.” (452) Style can be classified on different levels namely: Style as personal idiosyncrasy

Style as a technique of exposition Style as a highest achievement of literature Stylistic devices are basically the ingredients of language which is referred as synonym of style. Each writer has a peculiar way of using lexis and syntax. This peculiarity of applying language is called idiolect that is why we have Miltonic style or style of Coleridge. For example: ‘Mr. William could not mistake the style in his article.’ Here, in this sentence, style displays the idiosyncrasy of expression that distinct him from any other writer. He has his own observation that develops in his thoughts and finally turns into the shape of words chosen by him. Style is exposed as a manner of expression in writing and speaking e.g. ‘Mr. William has interesting ideas but he must mature his writing skill, at present he has no style.’

This style is the quality of lucid exposition of the sequence of ideas at intellectual level. Whether the style of an artistic piece is comic, tragic or ornamented is decided by this level. Thirdly, ‘Mr. William’s article is bombastic and farcical but one fact overweights this – he has style.’ Here style is a complete fusion of personal and universal that touches the peak of literature. Style may be referred as a departure from the set patterns of norms or as an addition of stylistic devices to neutral expression or as connotation where textual and situational atmosphere provide a linguistic feature its stylistic value. There are no strict rules for writing. Every time a person sits to write, he faces different words and syntax clicking his mind even on the same subject.

Style may change from situation to situation to be referred as register which marks the difference between language of advertisement and that of literature. Style may vary on the basis of degree of formality. An officer uses elegant and respective language to his seniors and gossiping verbal expressions to his colleagues. Style can also differ on the basis of genre – category of artistic work. Literary genre covers the range of biographies, poetry, fiction, drama, short stories, history writing and so on. For example history writing is based on the clues of past and historian has to be very careful in using lexis and syntax. The use of wrong lexis or syntax may lead to the misunderstanding of a historical fact. His hands are bind up with the facts of past.

While writing a poem, a poet may have the wings of imagination and can present the metaphysical world. Unlike a historian, he has the liberty to play with words and sentence structures. An incomplete and wrong structure is counted as a fault of a historian’s style but the same device becomes the style of a poet. In short, while style is the mirror of a writer’s talent and the way he can present his thought including dignity, clarity, ornateness and much more, stylistics is the study of varieties of language and efforts to develop principles capable of developing particular choices made by individuals and social groups in their employment of language.

What is meant by style and stylistics?. (2016, May 03). Retrieved from https://studymoose.com/what-is-meant-by-style-and-stylistics-essay 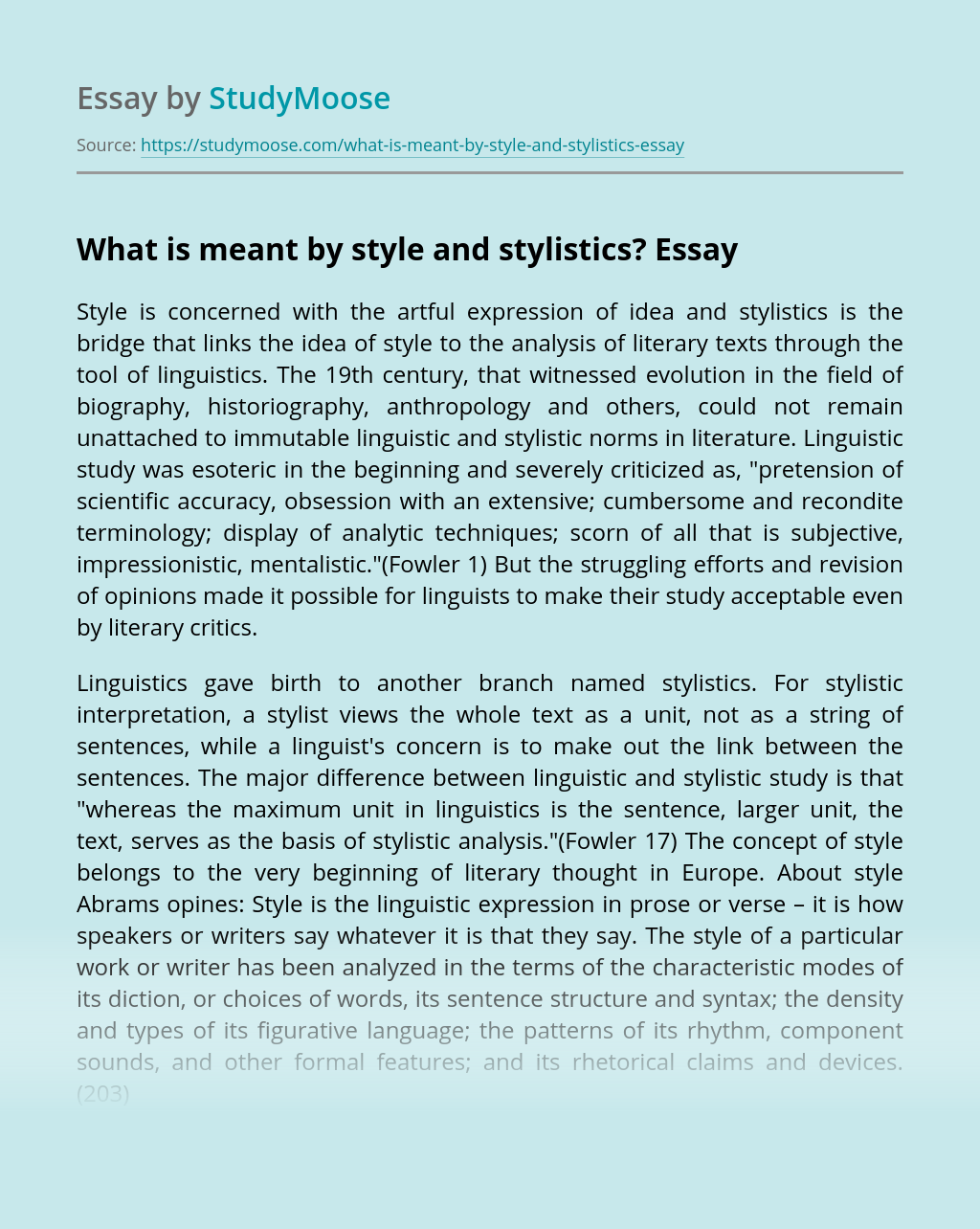