What is law reform?Law reform is adaptations made to legislation and laws

What is law reform?Law reform is adaptations made to legislation and laws to reflect contemporary society. As society moves ahead, the law lags behind. It is essential that law reform encourages improvements within society in order to achieve justice for the accused, victims, and the society. The effect of these changes can be seen through the creation of the Crimes and Other Legislation Amendment (Assault and Intoxication) Act 2014 (NSW) to mandatory sentencing reflecting its important role in the achievement of justice.

Don't use plagiarized sources. Get your custom essay on
“ What is law reform?Law reform is adaptations made to legislation and laws ”
Get custom paper
NEW! smart matching with writer

Brief Account of Loveridge’s crimeThe R v Loveridge 2013 [NSWSC] 1638] 1638 revolves around an intoxicated young offender pleading guilty to five counts of offending, occurring on 7th July 2012 at Kings Cross. The offender pleaded guilty for five counts of unprovoked attacks carried out randomly on unsuspecting strangers, consisting of one charge of assault occasioning actual bodily harm, 3 charges of common assault, and one charge for the manslaughter of Mr. Kelly. The offences compounded together form an overall episode of alcohol violence (LIAC Crime Library,2014).

This case was heard in the Supreme Court.Many expected that he would receive a hefty prison sentence. During the trial however, the presiding judge, Justice Campbell, used his discretion in choosing to implement a sentence that allows individual circumstances to be considered when applying the law. It allows it to balance the rights of the community, individuals, the accused and the victims while addressing the tension and any possible discrepancy (inconsistency) between these competing interests. On 8 November 2013, Justice Campbell sentenced Kieran Loveridge to a total of seven years and two months for the one-punch death of teenager Thomas Kelly and four assaults with an effective non-parole period of five years and two months.

What is law reform?Law reform is adaptations made to legislation and laws. (2019, Aug 20). Retrieved from https://studymoose.com/what-is-law-reformlaw-reform-is-adaptations-made-to-legislation-and-laws-essay 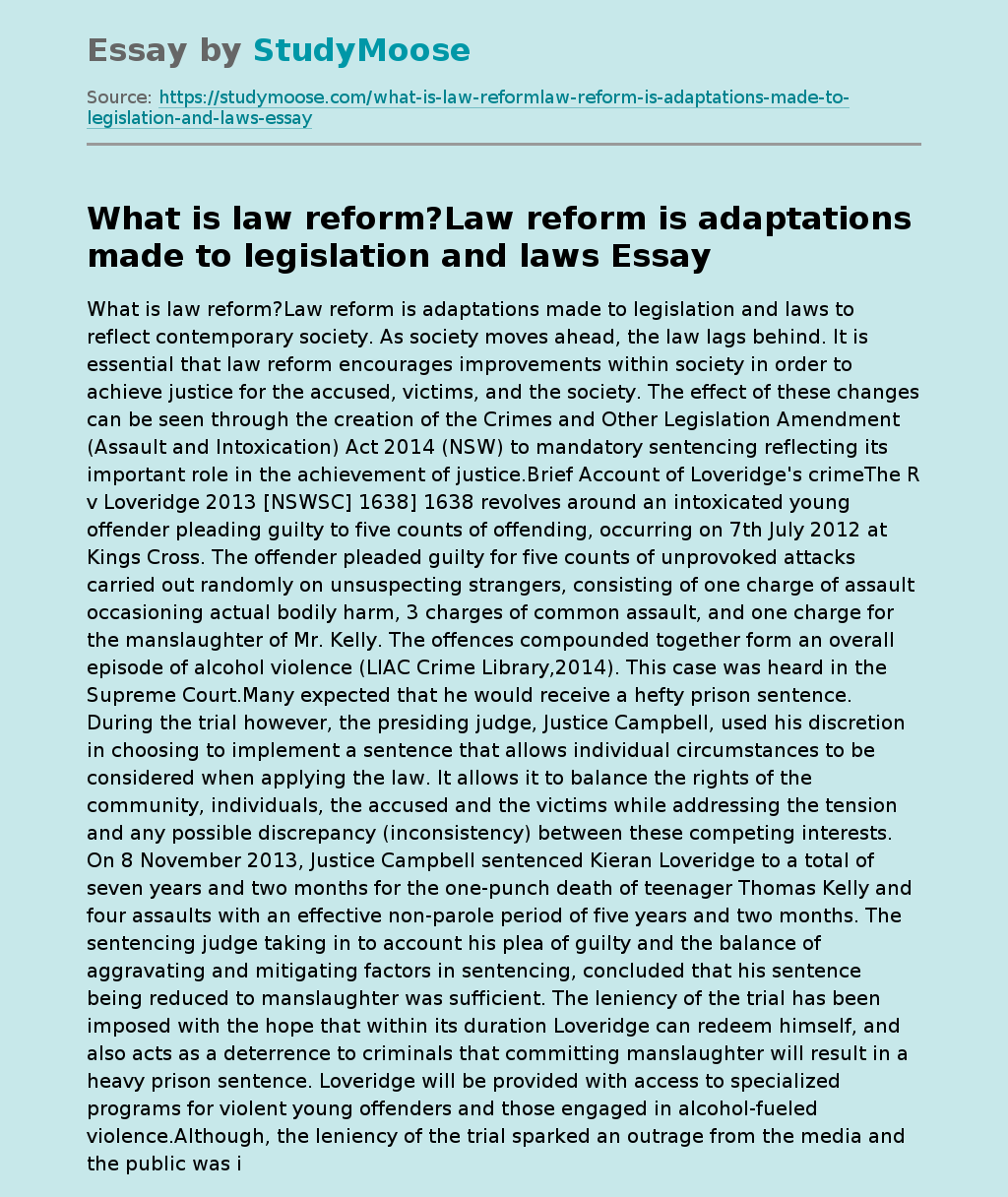