What is Genre Analysis?

Whether one is telling a joke, writing an email, or uploading a post on Instagram, an individual knows how these “genres function as social actions, [one] can quite accurately predict how they function rhetorically; your joke should generate a laugh, your email should elicit a response, and your updated Facebook status should generate comments from your online friends (Dirk, p.6).” Perhaps without even thinking about it, one is choosing to act in a manner that would result in the outcome one desired.

Don't use plagiarized sources. Get your custom essay on
“ What is Genre Analysis? ”
Get custom paper
NEW! smart matching with writer

Genres “represent their communities (NCTE, p. 4)”, ultimately affecting their communities and their interests, and they may even encompass participants beyond a narrow community. A genre is a category of artistic composition characterized by similarities in form, style, or subject. More specifically, it is the way in which an author addresses their audience, the certain genre conventions and rhetorical effects the author uses, and the response of the discourse community makes up a specific genre. For example, in nonfiction writing, the author writes their piece based on facts, real events, and real people.

Often, one will find that this genre is written in a story format because nonfiction is a genre of creative writing. Furthermore, when writing in nonfiction, it is important that the author provides content in good faith to represent truth and accuracy regarding their topic. In the genre of nonfiction, an author must choose their language carefully. For the rhetorical situation to be thoroughly portrayed, the author must use language in a way that their audience will understand the purpose and the story of their piece in the way the author intends them to.

For example, when writing about teenagers and automobile accidents, the author must establish their credibility without belittling teenagers or offending parents. It often helps to add a personal experience related to the topic to gain the trust of the audience. In the journal article, “Suddenly Sexy: Creative Nonfiction Rear-Ends Composition,” Wendy Bishop begins by sharing the story of her seventeen year old daughter having her “fifth automotive accident of her first twenty months of driving, the damage generously spread across three family vehicles” (Bishop, p. 1). In her journal article, Bishop uses this story to prove to her readers that no matter what mistakes an individual makes, one must continue to assume that young adults need to “discover what [they] don’t know, clarify what [they] don’t understand, preserve what [they] value, and share [their] discoveries with others (p. 2),” with the hope that they will eventually do what they have been striving for, which in the daughter of Bishop’s case is to drive again. Furthermore, the story of a teenage girl struggling with the responsibility of driving, allows the author to connect writing, teaching, and learning. Nonfiction writing is used to convince the reader of the author’s findings. Some authors write to tell a personal story and others write on behalf of other people, both of which often connect the story to a value. Bishop on the one hand, used a personal story to explain the concepts of creative writing; meanwhile, on the other hand, Sarah Shotland uses a personal story to show the public the cliches authors want to avoid when telling their stories. As a creative writing teacher in jails, prisons, and drug treatment centers, Shotland often works with writers who want to document their lives; and it is her job to help shape their stories. In one of her classes, Shotland and her class took “a few moments to discuss the cliches [they] hoped to avoid when telling their stories… Why do we always have to be brave or broken in order to be seen as writers?” The use of Shotland’s personal story introduces the addiction memoir, a literary representation of addiction. This specific piece of nonfiction is “an illumination of shared humanity, an invitation to empathy, and a gesture of solidarity. It can cast a light on broad cultural phenomena, weaving together the personal and political, the micro-details of individual experience and the wide lens view of political systems. At its worst, it can reinforce old clichés and harmful, reductive stereotypes. It can narrow, rather than expand, readers’ understanding of an experience—or of a whole group of people.” Creative writing is used for more than just telling a story and convincing the reader to be on the page the author wants them to be; it is also used to make the reader feel how the author is feeling throughout the story. Unlike Bishop or Shotland who used her personal story as a hook for their piece of writing, Nicole Economou uses the genre of creative writing to tell a horrific story in a way that the reader will not forget like the many things that they probably will. Economou uses pathos to effectively tell her story in a way that will force the reader to care and to remember. Throughout the story, the author pays very close attention to the details of her language. Every word describes the fear and weakness the high school girl felt that night after the party. But the author does not focus solely on that night, she also describes the future of the young girl and the young man that accompanied her that awful night. Through the use of her dark personal story, Economou explores the elements of nonfiction writing in a different way than the previously mentioned authors. Economou focuses on the actual story, rather than using the story to support an opinion or theory. The creative writing of the genre that is nonfiction is very broad, and focuses on the element of telling a story with a purpose of exploring the author’s views of a topic. Nonfiction writing is used in all types of topics, ranging from a journal article to short online stories. No matter the range of the piece, each one falls under the umbrella of nonfiction writing, telling a story of a truth and with accuracy to grasp the attention of the reader and convince them to understand the topic in the way the author wants them to.

The Wizard of Oz is one of the biggest American Musicals in film. It has become known world wide, it is apart of our American popular culture, and is best known of all films. It was based on the novel, The Wonderful Wizard of Oz written by L. Frank Baum in the 1900s. It was produced by Metro-Goldwyn-Mayar in the year of 1939. This film just hit the end of the “Golden Age of the Musical” that started in the early 1930s. MGM benefited greatly from the hit of the rebirth of musicals.

It’s known for the use of technicolor which is a system of making color motion pictures by means of superimposing the three primary colors to produce a final colored print (Websters Dictionary), fantasy storytelling, interesting and creative characters, and the musicality imbedded into it. There was also a complex use of special effects for film in that specific time era which helped the film receive special notice. MGM’s film had many awards but one of the most famous one was the award of Best Original Song for “Over the Rainbow.”

It was sung by Judy Garland as Dorothy just five minutes into the movie after she was trying to get her Aunt and Uncle to come to a realization of what happened to her poor little dog Toto. In the beginning of the film “Over the Rainbow” is played by MGM orchestra over the starting credits. There is a big taste of fantasy in this particular film which kind of in a way departs away from the musical genre. There is many scenes of flying monkeys, and the wicked witch of the West and Glinda, the good witch of the South, and the munchkins, and talking lions, and a tin man, and a talking scarecrow.

Also starring Frank Morgan as the wizard, Ray Bolger as the scarecrow, Jack Haley as the Tin Man, Bert Lahr as the cowardly lion, Billie Burke as Glinda the good witch of the south, and Margaret Hamilton as the wicked witch of the west. “Somewhere over the Rainbow” became Judy Garland’s signature song. She has been in 32 of MGM’s films and she won a Golden Globe Award, Grammy Awards and the Special Tony Award. She was then nominated the Academy Award for Best Actress for her role in “A Star is Born”. Everyone of the lead rolls in The Wizard of Oz has been in many of Metro-Goldwyn-Mayar’s other films.

What is Genre Analysis?. (2020, Sep 07). Retrieved from http://studymoose.com/what-is-genre-analysis-essay 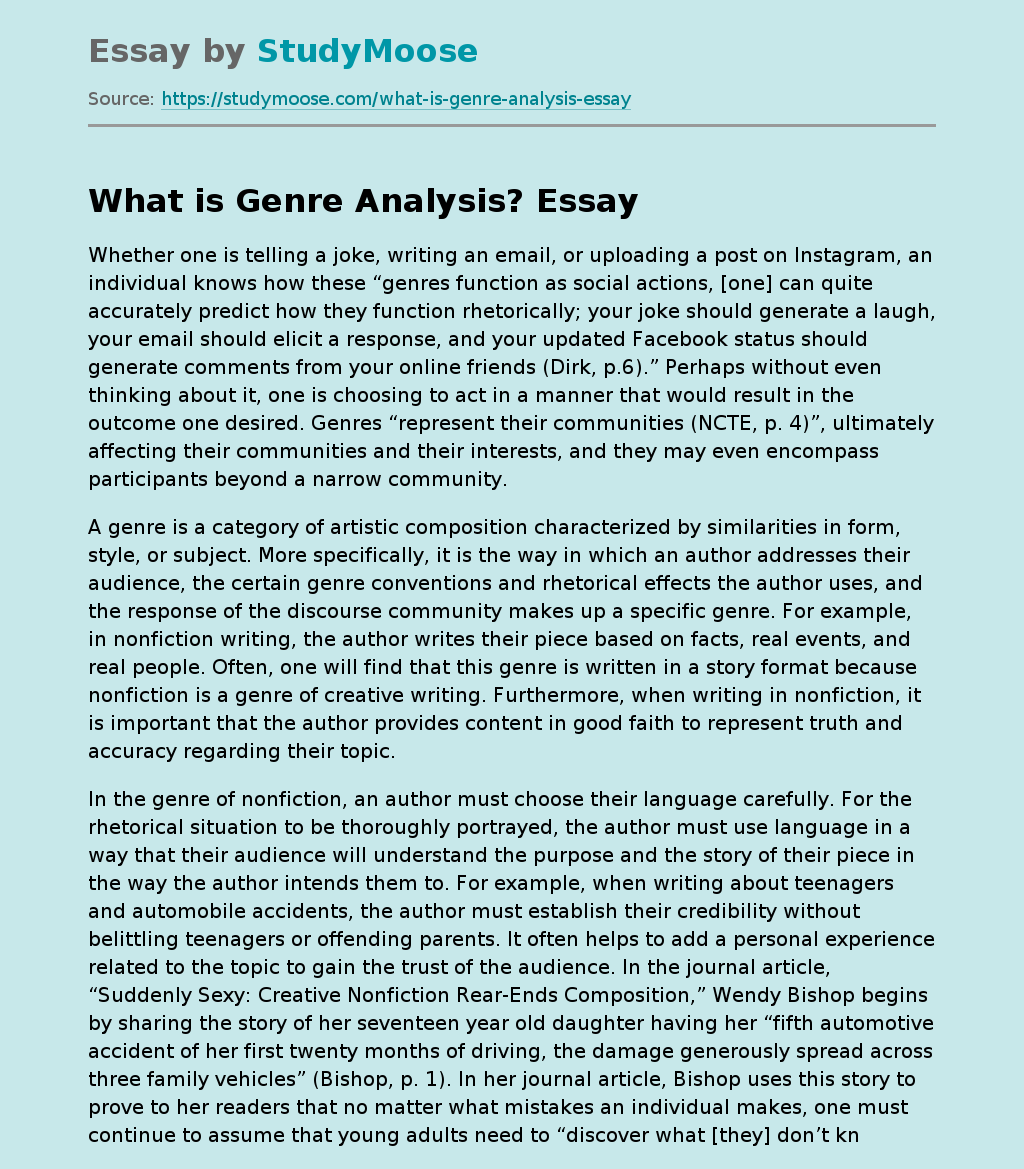