﻿What is Freedom? Essay

Freedom is something that is viewed in many ways. Freedom can be something you earn, something you experience, or it can be something you think. People long ago had to work very hard for their freedom. Slavery was one of the times that freedom was given to nobody, and played a major role in the United States history. Slavery began around 1619, when the first African slaves were brought to the United States, they were workers without rights. (Slavery in America, 2014) They were told that if they worked for seven years, they would earn land and freedom.

Don't use plagiarized sources.
Get Your Custom Essay on ﻿What is Freedom? Just from $13,9/Page

Abraham Lincoln once said, “Those who deny freedom to others deserve it not for themselves.” (Lincoln) In 1641 slavery was legalized, and the U.S. was against itself. In 1660 King Charles II established the Royals African Company, calling them black gold, where more African Americans had their freedom taken away. In 1860 more than a million African Americans were taken from their homes and sold off. By 1865 slavery was finally abolished and they had their freedom to read and write, and their behavior and movement was no longer restricted.

Freedom is based off your view and thought of the value it has to you, no one definition can relate to everything that freedom can mean. According to the Merriam-Webster Dictionary, freedom is “the quality of being free” but what exactly does that mean? Does it mean you can do whatever you wish? Or does it mean everything you need is free? Jim Morrison once said, “The most important kind of freedom is to be what you really are. You trade in your reality for a role. You trade in your sense for an act. You give up your ability to feel, and in exchange, put on a mask. There can’t be any large-scale revolution until there’s a personal revolution, on an individual level.

It’s got to happen inside first.” (Morrison) Freedom within yourself can be to accept you for who you are, not be restricted on what you can do with yourself, let your imagination be free and soar outside the limits. Let your thoughts go where they wish and keep your mind set. Don Miguel Ruiz wrote in his book The Mastery of Love, “If you spend too much time judging yourself, you won’t have any time to love yourself or anyone else.” I believe this quote relates to freedom because like I said before, you need to let your mind be free to be able to live with freedom.

Along with having internal freedom, you can experience and be rewarded with freedom. Experiencing freedom is not something everyone has. As a young kid, my parents always told me “Once you lose our trust it’s hard to gain it back.” And with this always being said to you, you learned to respect the freedom that you received, and wait until you are rewarded with more. As you get older and learn to drive you are given a whole new type of freedom. There are no words to explain the type of freedom you experience, and no emotion that is any greater. Someone once said “Never drive faster than your guardian angel can fly.” (teenage drivers, 1998- 2014) And this saying means to respect what freedom you have because some people have less and would give anything for your freedom.

So what exactly is freedom? Well, Bubr (Bubr is someone who chose not to give their real name) once said start with the possibility to do whatever you want. You may want to share your freedom with other people, right? Then accept the fact that other people doing whatever they want are limiting your own freedom. Then, you come to the conclusion that you may not have freedom at all, if the freedom is a measure of the length of a leash. (Bubr) But, many other people have different views of freedom and it is not just what laws limit you too.

Jarod Kintz said “Nothing, Everything, Anything, Something: If you have nothing, then you have everything, because you have the freedom to do anything, without the fear of losing something.” Freedom is not limited to just one person’s idea of it, their experiences, feelings, thoughts, and love towards freedom. “Freedom is the right to live as we wish. Nothing else.” (Epictetus, 2001-2014) It is not being limited with your rights and not being restricted with reading, writing, behavior and movement. It is not constantly being told what to do and limiting your mind to please others, first give yourself freedom then help others with theirs.

You may also be interested in the following: what is authentic freedom 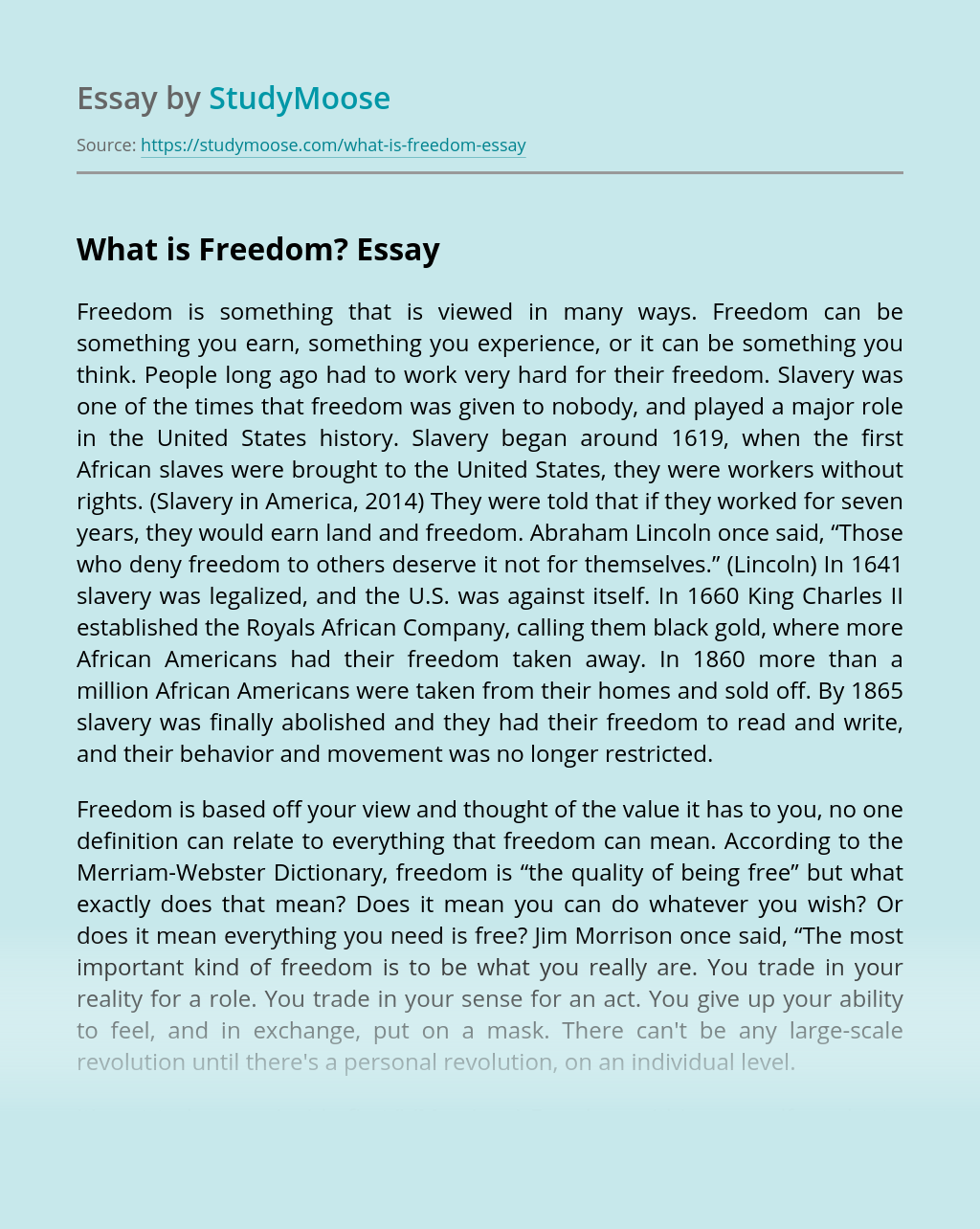 How many of you have ever tried or eaten a peanut butter and banana sandwich? For those who have banana sushi is exactly that but much more fun and exciting to do at home. Transition: let’s start by getting ingredients BODY: I. The first step is to get all of the ingredients. A. There are... VIEW ESSAY

PAMBID, Bianca Angela M. 2J-MT The 1992 movie A Few Good Men contains many ethical conflicts with all the main characters. There are two main ethical dilemmas in the movie, one is with Tom Cruises character and the other is with Jack Nicholsons Character. The movie is about a young military layer named Lt. Kaffee... VIEW ESSAY