What is Dementia Care?

Dementia is the name for a group of symptoms which arise from different disease that affect the brain. The brain is made up of millions of brain cells which send messages to each other. These messages tell the individual everything they need to know to cope with everyday life, such as how to move, what they are seeing, how to speak. They also store memories and control emotions – such as laughing and crying. In someone with dementia, some of these brain cells become damaged and die, as a result their brain doesn’t work as well as it used to, simple messages do not get through.

Don't use plagiarized sources. Get your custom essay on
“ What is Dementia Care? ”
Get custom paper
NEW! smart matching with writer

The typical early signs of dementia are someone becoming forgetful and confused, forgetting people’s names or how to get home.

Later, people are likely to find everyday tasks such as shopping or cooking difficult. They may also find social situations hard to manage. The symptoms of dementia grow worse over time. It is gradual, and everyone experiences the changes at different speeds.

There is no cure but there are treatments that help slow it down or help people cope with certain symptoms. And there are lots of ways of helping people live a full and happy life. These range from simple adaptations in the home to support from health and social care professionals, to financial help. I am now going to look at each of these diseases and look at the signs and symptoms of each type.

Alzheimer’s disease is an irreversible, progressive brain disease that slowly destroys memory and thinking skills, and eventually even the ability to carry out the simplest tasks.

In most people with Alzheimer’s, symptoms first appear after age 65. During the preclinical stage of Alzheimer’s disease, people are free of symptoms but toxic changes are taking place in the brain. Abnormal deposits of proteins form amyloid plaques and tau tangles throughout the brain, and once-healthy neurons begin to work less efficiently. Over time, neurons lose their ability to function and communicate with each other, and eventually they die. Before long, the damage spreads to a nearby structure in the brain called the hippocampus, which is essential in forming memories.

As more neurons die, affected brain regions begin to shrink. By the final stage of Alzheimer’s, damage is widespread, and brain tissue has shrunk significantly. It has become increasingly clear that it develops because of a complex series of events that take place in the brain over a long period of time. It is likely that the causes include some mix of genetic, environmental, and lifestyle factors. People differ in their genetic make-up and lifestyle, the importance of any one of these factors in increasing or decreasing the risk of developing Alzheimer’s may differ from person to person.

The biggest hurdle an individual will face is losing their independence. In addition, physical and mental changes from Alzheimer’s disease can affect their mood and appearance and can diminish their positive self-image and reduce their self-esteem, leading to social isolation. Alzheimer’s disease can also influence their ability to function and get around at home. Confusion, as well as feeling disoriented and unable to make sound decisions, may require you to modify their work activities and environment. Because people with Alzheimer’s are unable to work, they may also find themselves in financial difficulty due to the rising costs of care. They will find that specific tasks take much longer to accomplish and that planning their daily activities differently can help. An individual may also need the help of their husband/wife, a relative, or a home health care provider.

As their life changes, they are likely to feel a loss of control and increased anxiety about what lies ahead. In addition to all this, they may find that their moods go up and down and that they could also feel angry, depressed, confused, lonely, and frustrated, especially when they first get their diagnosis. Some of the most common feelings families and caregivers experience are guilt, grief, loss, and anger. It is quite common to feel guilty at feeling embarrassed by their odd behaviour, guilty for lost tempers or guilty for not wanting the responsibility of caring for a person. If the person with dementia goes into hospital or residential care you may feel guilty that you have not kept him at home for longer, even though everything that could be done has been done.

It is common to feel guilty about past promises such as “I’ll always look after you,” when this cannot be met. Grief is a response to loss, when someone close develops dementia; they are faced with the loss of the person they used to know and the loss of a relationship. People caring for partners may experience grief at the loss of the future that they had planned to share together. Families may also feel frustrated and angry at having to be a caregiver, angry with others who do not seem to be helping out, angry at the person with dementia for their difficult behaviours and angry at support services.

What is Dementia Care?. (2016, Sep 22). Retrieved from https://studymoose.com/what-is-dementia-care-essay 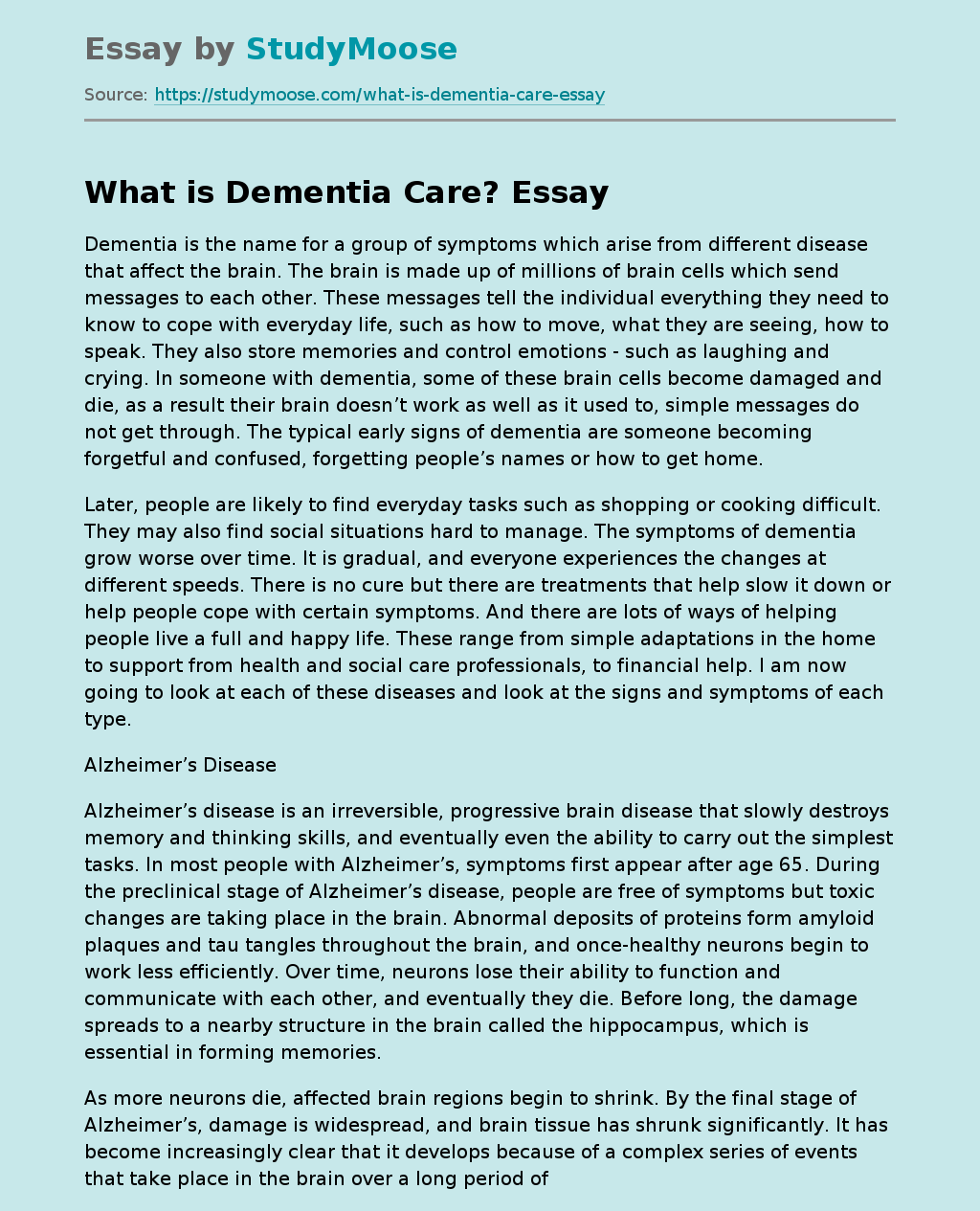