What impression is given of Aeneas?

Only his son and heir, Ascanius, is still standing at the end of Book Twelve. Of course, it may be argued that the hero is culpable for not a single one of these deaths were it not for the fact that, with the exception of Anchises, Aeneas readily confesses to his personal failure in the role of warrior-protector. For instance, he admits to being “confused” and “robbed” of his “wits” when, in Book Two, he quite literally loses his wife, “I never saw her again.

Don't use plagiarized sources. Get your custom essay on
“ What impression is given of Aeneas? ”
Get custom paper
NEW! smart matching with writer

Nor did I look behind me or think of her or realise that she was lost.

” (Book 2). Odysseus is performing an act of duty to himself. Aeneas is carrying to burden of a nation without a home. This difference means that any mistakes that Aeneas makes are taken more seriously. By the end of the poem Odysseus, himself returns home with all his men lost. But he succeeds his nostos. He is still a hero. Aeneas could not have lost many men because he would have no people to found his city with.

Odysseus’ mistakes are critical to his own nostos. When Aeneas remains at Carthage, his people’s fates are at risk.

Odysseus has a painful curiosity, which in some cases I am sure contribute to his reputation as “The master strategist”. At the Cyclops’s cave, even though his men are scared and eager to leave the empty cave, Odysseus makes them stay in hope for guest friendship. This leads many men to be “dashed against the rocks as if they were puppies” and being eaten alive by the Cyclops – a big mistake on the part of Odysseus.

Another huge flaw in his character is pride. When Polyphemus is blinded, Odysseus shouts a boast of who he is and where he is from so that the ruined Cyclops can hear.

This was a huge mistake because Polyphemus is the son of Poseidon and he prays to his father that Odysseus will never see the shores of Ithaca again which is why his nostos took so long because he had a god against him. As if this is not enough, because of this taunt the Cyclops hurls many boulders into the sea to sink their ship. A couple nearly hit and sink the ships, this means that Odysseus actually endangers the life of his men whilst caring so much for them, because of his pride.

By his own admission he simply forgets about Cruesa and as a result the encroaching Greek forces slaughter her. It is important to understand that it is impossible to extricate Aeneas the warrior from the various other roles that he fills in the poem, as lover, as husband, as father, and as son. The character is a complex composite in which all these facets become inextricably bound together and as a result his shortcomings as guardian to his family has an impact on his position as a warrior and as a guardian to the citizens of Troy.

Once again Aeneas seems to fall short of the Homeric model and it is worth remembering the value which Odysseus places on household, his actions throughout the final section of the Odyssey are motivated by a determination to secure not only his material possessions, but also to protect Penelope and Telemachus from the threat of the Suitors. However, there are moments in the poem where Aeneas appears as neglectful and ineffectual as a military leader, as he does as on the domestic front. Aeneas is the judge and jury of his own actions and a poignant sense of guilt is infused in this moment of realisation.

A Roman warrior is also a moral warrior, and it is the words of Anchises in Book Six, “you must be the first to show clemency” (Book 6), that the hero violates when he slays Lucagus and Lausus. Odysseus often hesitates before acting, because he uses his reason and power of strategy to evaluate things. This patience is on of his most important attributes. This saves him and his men many times and it can be seen best, in my opinion in the disguising of himself, with Athena’s help, into a beggar, just waiting for the right time to reveal himself back in Ithaca.

Also, his plan to avoid the taunts of the Sirens song is also very effective. He fills up his men’s ears with wax and has himself tied up so that he can listen to it without acting on it, therefore saving both his own life and the lives of all his men in this instance. Odysseus is prudent. He takes great cares whilst on Circe’s island to stop anything going wrong by dividing his men and taking a very active role himself. Also, he deliberately does not tell his men about Scylla so that they are not scared meaning that many less of them are killed than would have been under different circumstances.

He is fair and shows this by using lots to decide who performs which duty such as in the cave of the Cyclops and to divide the groups into two on Circe’s island. With these lots he clearly shows that he knows his men well. He says, “The lot fell on the very man that I myself would have chosen”. This good judgement of character is also clear when Polites “the one he liked and trusted the most” is brave enough to knock on Circe’s door. Even though at times Odysseus inevitably does lead his men into danger, Homer does show us that they are argumentative and can be extremely awkward.

During the sacking of Ismarus he advises his men to leave before new troops came, “but my fools of men refuse”. And he decides not to take the members of his crew into confidence about the bag of winds which means his men, filled with curiosity open it, blowing them far out of course. Another example of Odysseus’ men doing what they shouldn’t is with Hyperion’s cattle, which they eat. Odysseus states that, “I am one against many”. He is a human leader and makes mistakes, as does Aeneas. Aeneas is a leader devoted to his men, family and gods but he still seeks the glory of a future empire.

Although Aeneas has his moment of self-pity during the storm, he does show good leadership qualities when dealing with his men afterwards. As a result, Virgil creates a new and different hero by combining human frailty with human strength. As a Trojan leader, Aeneas respects prophecy and attempts to incorporate the idea of his own destiny into his actions, in spite of emotional impulses that conflict with his fated duties. His ability to accept his destined path despite his unhappiness in doing so makes him a graceful hero and a worthy recipient of the honour and favour the gods bestow upon him.

His compassion for the sufferings of others, even in conjunction with a single-minded devotion to his duty, is another aspect of his heroism. Sympathetic to the weariness of others on the journey, he delivers speeches to his fleet to keep the men’s spirits high. Immediately, as Aeneas begins his first speech, Virgil shows Aeneas’ human frailty, “Aeneas’ limbs are loosened by chilly fear” (Book 1). Aeneas is frightened by the storm and is in despair because of his impending death.

He regrets not being able to die an honourable and glorious death in battle against Diomedes, a fierce warrior, “Could I not have fallen on the Trojan fields and have poured out this spirit with your right hand”. Thus, Aeneas shows a loss of hope because he cannot have a glorious death; instead he must settle for a nameless and pitiful one. Aeneas’ second speech, however, is more uplifting because he tries to revive his men’s spirits after the storm. He lists their past obstacles, such as the Scylla and the Cyclops, and puts the storm in a different perspective. These words give his men strength and encouragement to persevere.

Aeneas also gives them hope and faith, “A god will also give an end to these things”. Aeneas provides his men with the hope that he himself did not possess in the first speech. This ability is an important quality of leadership that Virgil portrays through Aeneas’s second speech. What Aeneas says is not what he feels, “He controls the deep pain in his heart”. Aeneas does what is necessary to continue the mission even if it is contrary to his desires. Aeneas thinks more about his men than about himself, thus exemplifying his piety. For the sake of his men, Aeneas feigns hope on his face although he is worried.

With both speeches, Virgil shows important qualities of a leader. Aeneas puts the feelings of his people before his own as every leader should. Aeneas’s human frailty allows him to identify with his people; he is not too divine to feel the pain and grief that the rest of Trojans feel. Aeneas keeps his men alive by both feeding their bodies with food and feeding their souls with hope, “And perhaps one day it will please us to remember even these things”. By saying these words, Aeneas provides the Trojans with a father figure – exactly what they need in these troubled times.

The Trojans need someone who is wiser and in control to guide them through their journey. Virgil intended Aeneas to be the perfect Roman embodying the most valued personality traits. The Romans greatly valued the personal qualities of a strong devotion to duty, a strong character, and putting the common good before personal gain. Aeneas would therefore exhibit strong leadership qualities from a Roman civilisation’s point of view. However, from today’s point of view we are most ably allowed to look around his character and compare it to what we class as a “good” man and a “good leader”. Aeneas and Odysseus are both good leaders.

They both succeed in their missions. But Aeneas, in my opinion, goes through more temptations and hardships than Odysseus and has a far grander mission with two gods against him. He is open to make more errors because he is shown as the lesser man, a younger man who has been through less than Odysseus. He does not have to master strategy of Odysseus which makes it difficult for him until he is prompted by the gods. The main difference between these two characters is that Odysseus has the ambition to return home and is merely helped by Athene. Aeneas is pushed and played with by fate and the will of the gods.

What impression is given of Aeneas?. (2020, Jun 02). Retrieved from https://studymoose.com/what-impression-is-given-of-aeneas-essay 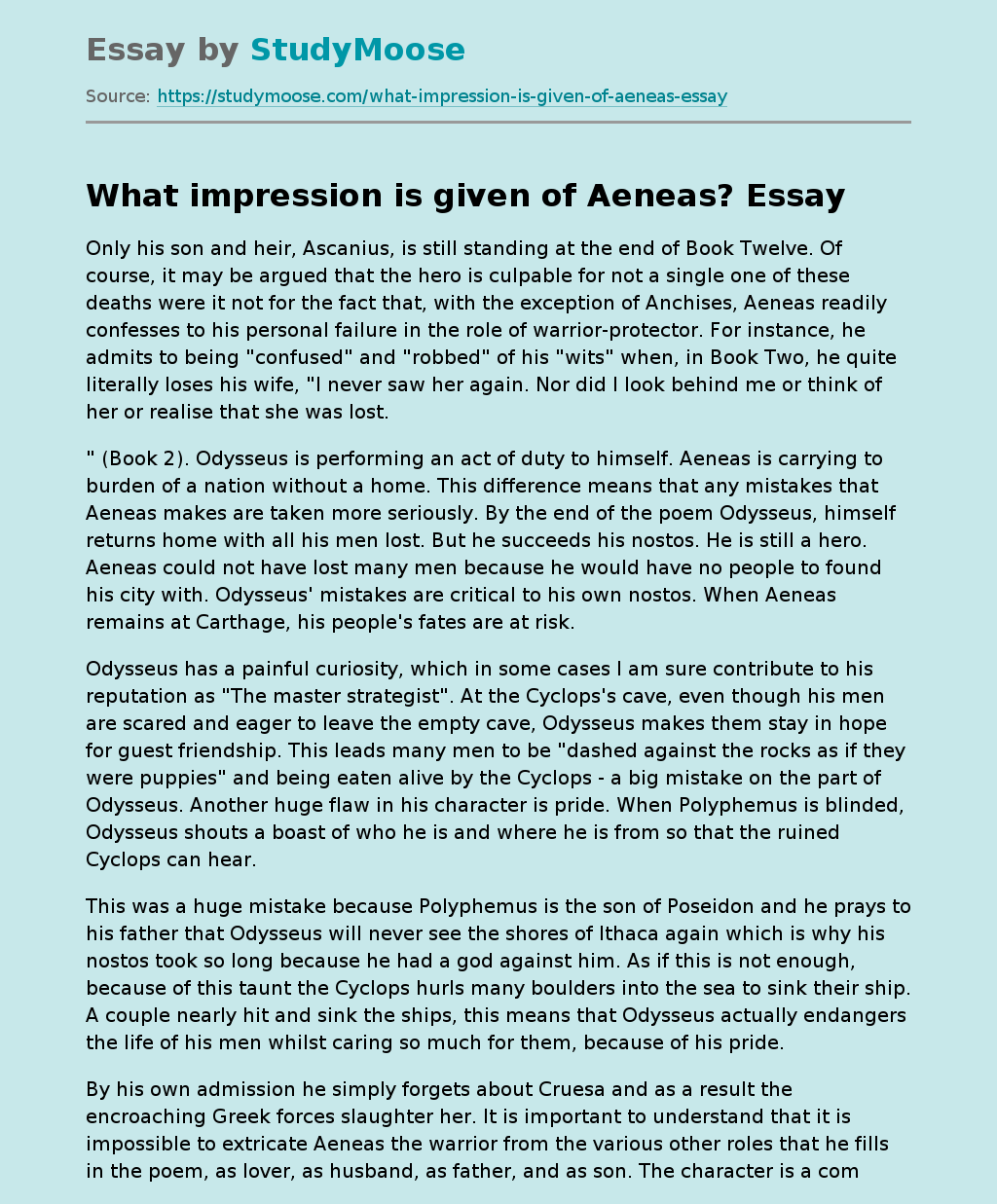