What impact does an absent father have on child development? Essay

The absence of a father can have emotional and social consequences in a child’s development. Children manifest problematic behaviors including depression, aggression, delinquency, early role difficulties, as well as poor social and adaptive functioning and low self-esteem. In daughters, the absence of a father reveals different behavior dimensions, the way they view the opposite sex, the outside world, and themselves.

In the absence of male parental models, boys could not acquire strong masculine identities and would not have models with which to identify with.

Don't use plagiarized sources.
Get Your Custom Essay on What impact does an absent father have on child development? Just from $13,9/Page

10. What factors lead a family to become incestuous? Factors leading to incest can vary. A disturbance in the family relationship can generate a shift in individual responsibilities and expectations that can lead to incest. A lack of spousal sexual activity can also lead to incest. 11. What are the tasks of adolescence? How are they impeded by maltreatment?

Maltreatment causes an adolescent to be at great risk for emotional, behavior, learning, and physical difficulties. Other potential long-term effects include fewer opportunities for comfort, support, and nurturance.

The psychological effects may include the avoidance of intimacy and provocative behaviors. Chapter 4 Page 93 1. Why has the study of neglect been so neglected? Neglect is most likely placed at the bottom of the priority list for child protection studies since the harm caused in cases of neglect are unlike those cases in physical or sexual abuse which are usually observable and not ambiguous. 2. How can neglect be defined? Why must a client’s cultural background be considered when defining neglect? Neglect is the failure of a parent, guardian, or other caregiver to provide for a child’s basic needs. Neglect may be physical, medical, educational or emotional.

A client’s cultural background needs to be considered when defining neglect because there are practices viewed acceptable by one culture but are abusive or neglectful to another. 3. What theories explain the cause of neglect? Theories explaining the cause of neglect revolve around the belief that neglectful parents simply do not know how to parent their own children. These could be because they were also abused as children and may have problems building intimate relationships with their children. They rarely engage their children in play or conversation and use avoidance strategies in dealing with them. It could also be because these parents may not have planned their own lives and are not ready for the obligations and responsibilities that come with parenting.

First time parents may have high risk for parenting problems due to poverty, youth, low education or lack of support. 4. What makes neglectful families difficult to treat? As a society, we have difficulties in confronting the issue of child abuse and neglect because to do so means we have to confront the endemic nature of child maltreatment. Parents may be in denial over the fact that they have been irresponsible parents and neglected their children and will probably not seek help. 10. What effects might their parents’ substance abuse have on children? Substance abuse by parents can have negative effects on the health, safety and well-being of children.

Two areas of concern are the harm caused to prenatal drug exposure that leads to developmental problems and birth defects in an infant and the harm caused to children of any age by exposure to illegal drug activity in their homes or environment. Children exposed to substance abuse are most likely to be using or abusing substances later in their lives. They also exhibit characteristics that include a mix of behavioral and cognitive variables including less competence, more deviant self image, and more susceptibility to peer pressure. Chapter 5 page 117 1. Discuss the problems of defining abuse? There are different and conflicting definitions of child abuse and child neglect that are in use today.

These definitions may have legal, social work, medical, psychological, or sociological orientations. While many definitions share common approaches or elements, not one definition has achieved wide acceptance. 5. Cite physical and behavioral indicators of abuse. The possibility of physical abuse is seen when a child has unexplained burns, bites, bruises, broken bones, or black eyes and if a parent uses harsh discipline with the child. Behaviors exhibited by an abused child is seen when the child seems frightened of the parent or shrinks at the approach of adults. An abusive parent tends to offer conflicting, unconvincing or no explanation of a child’s injury. 6. Why might adolescents be abused?

Abuse is different in adolescents and children as some kinds of abuse may be more difficult to recognize in adolescents. Adolescents are in a stage where sexual development becomes more imminent and they may view abuse as a form of affection from the perpetrator. Adolescence is also a risky time for dating violence for female adolescents as they are exposed to sexual abuse and physical abuse. Male adolescents are also exposed to sexually predatory females but may not view this as abusive since it is the norm for younger adolescents to view having sex or intimate relationship with an older woman as “cool” or getting “lucky. ” 8. What is meant by Munchausen syndrome by proxy?

What are the characteristics of this type of abuse? Munchausen syndrome by proxy (MSP) is a type of factitious disorder, a mental illness in which a person acts as if an individual he or she is caring for has a physical or mental illness when the person is not really sick. A person with MSP has an inner need for the other person, often his or her child, to be seen as ill or injured. People with MSP intentionally harm or describe non-existent symptoms in their children to get the attention given to the family of the person who is sick and uses the many hospitalizations as a way to earn praise from others for their devotion to the child’s care.

What impact does an absent father have on child development?. (2017, Feb 08). Retrieved from https://studymoose.com/what-impact-does-an-absent-father-have-on-child-development-essay 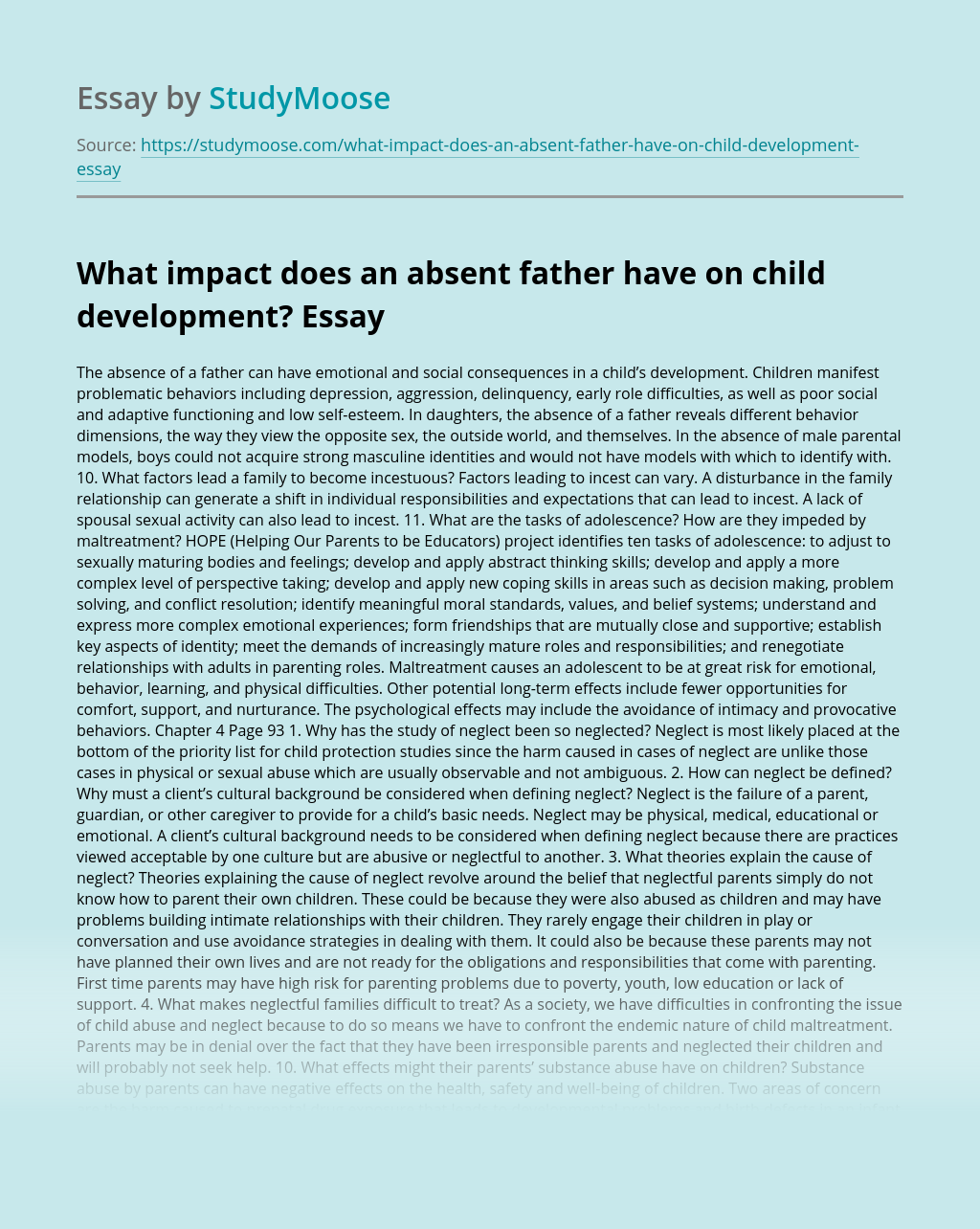