"What Happiness Is" by Eduardo Porter Essay

Eduardo Porter in the essay What Happiness Is argues several viewpoints on the true meaning of happiness and how people strive to obtain it. After several descriptions of finding happiness, Porter claims “we pursue what we think makes us happy” (Porter1) and that most people “expend enormous amounts of time and energy pursuing more money” (Porter3), claiming people get happiness out of material possessions. Cynical as Porter may seem by this statement he wrote earlier in his essay, “it remains generally true that we pursue what we think makes us happy”(Porter2), so saying money and possessions while not the only road for happiness, is the most common.

Don't use plagiarized sources.
Get Your Custom Essay on “What Happiness Is” by Eduardo Porter Just from $13,9/Page

Porter’s thesis that “Happiness is a slippery concept, a bundle of meanings with no precise, stable definition” makes us see that because so many people see happiness differently in what makes us happy, how we find happiness, and what each individual perceives as proper happiness that there truly is no one true way to find happiness and everyone must determine for themselves what happiness is.

As Porter claims a common concept of happiness is filling your life with material possessions and money, for some this is a valid source of happiness. Randy Frost of Smith College supports the claim that possessions make us happy by arguing “Our possessions all have magical qualities. Many, if not most, of the things we keep have an essence that goes beyond the physical character of the object.”(Frost) Continuing on to say that by collecting, holding onto keepsakes, and gaining the satisfaction of owning specific objects becomes something that makes people feel safe and secure and relives anxiety. Looking at a memento years after can remind us of that happy time in our past allowing us to re-live those moments, and keeping some sort of collection as a hobby and actively seeking out more objects to grow it give the satisfaction of hard work.

An interesting point Frost makes is that half of what makes us happy about our stuff is “our ability to rid ourselves of material possessions”. Frost claims as we grow and change, we also change the stuff we hold on too and what we regard as important, that shedding these things of our past we are able feel satisfaction. When someone matures and gets older or have made positive changes in life they are able to feel happiness by getting rid of parts of their past. Just as some are satisfied by a cycle of items, others refute the claim that material items breed happiness and prefer to live chaste lives free of possessions.

Contrastingly an equally popular way of thinking is that material possessions make us unhappy and that only by not relying on them will we find true happiness. In fact the idea that material possessions are damaging to happiness is such an old concept that it presents itself even in worldwide religions. Those that follow this ideology believe that happiness is found through experiences that last with you, rather than the happiness found in possessions which fade over time. Ryan Howell of San Francisco State University conducted a study in which out of 154 people stated that spent money on experiences such as a concert, seminar, or class where still getting happiness out of that experience than people who bought “things”(Howell).

Psychological standards state people lose interest in an object in “four to six weeks” while people that can take a lesson from something take more from the experience in the long run. These two different pursuits of happiness contradict each other completely in terms of material and spiritual happiness, however people that strictly follow them all experience different forms of happiness. Simply picking one path of happiness might work for one but could leave another completely miserable. There is no one way to find happiness; it’s an infinite concept for which there will never be a final answer.

"What Happiness Is" by Eduardo Porter. (2016, Sep 11). Retrieved from https://studymoose.com/what-happiness-is-by-eduardo-porter-essay 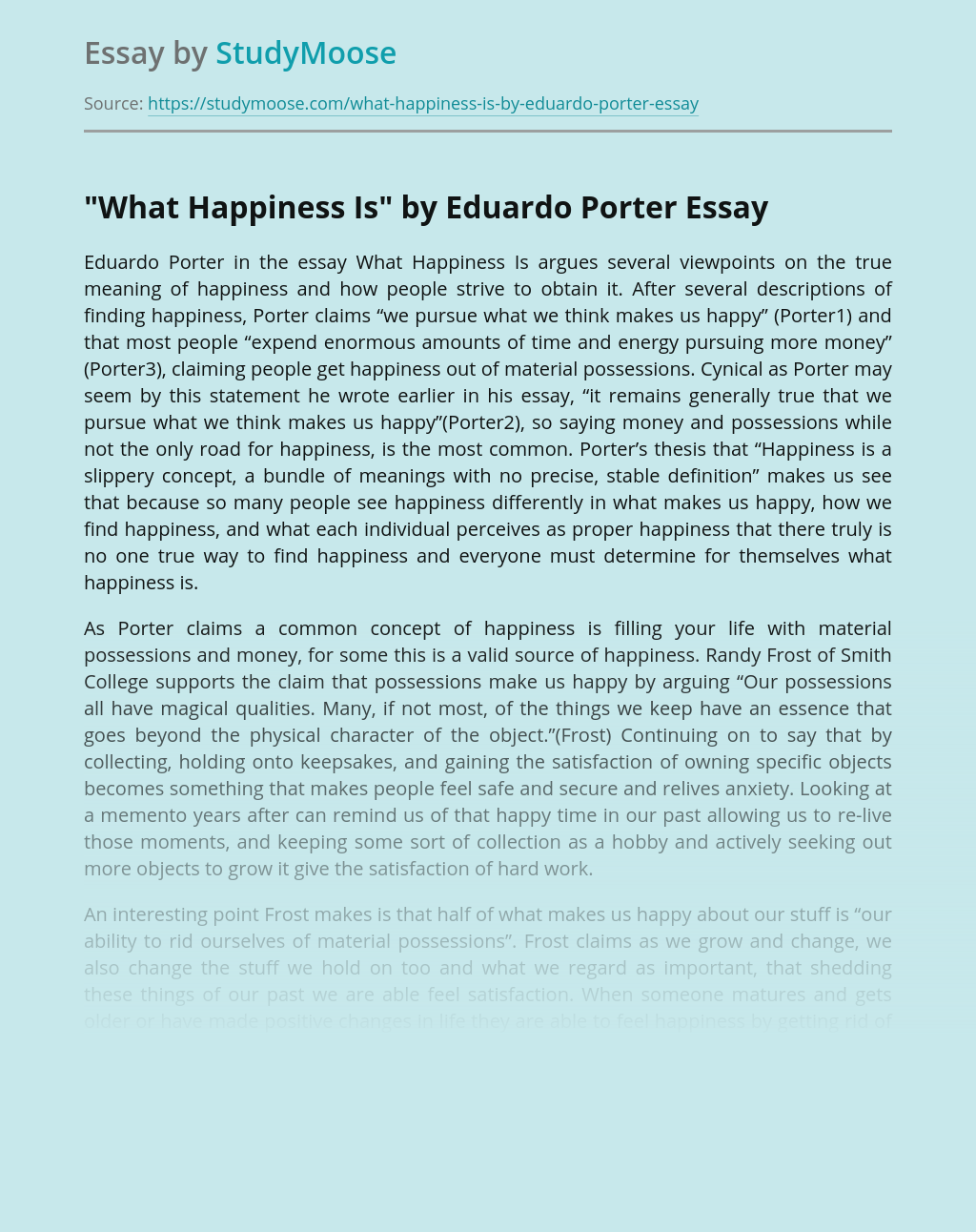 According to the constitution of the United States of America, all people are entitled to life, liberty, and the pursuit of happiness. To understand that phrase, the word pursuit must be fully taken into account; it means that happiness cannot be guaranteed under any circumstances. What causes happiness is completely different between individuals. For example,... VIEW ESSAY

In your role as a writer for this class, your first paper will be a reflective writing. You have numerous options to choose from: 1 – Literacy Autobiography: This paper will take the form of an autobiography, memoir, or personal essay describing 1) a particularly important literacy event in your life, or 2) a more... VIEW ESSAY

View sample
Get Essay
Things That Make Me Happy

What kinds of things make me happy? I could probably write a book about this topic once I sit down and begin thinking about it. Happiness means something different to each individual. On Saturday morning, I love waking up and knowing that I don’t have to be at any particular place for any particular reason.... VIEW ESSAY

View sample
My Idea of Happiness

Lev Tolstoy notes at the beginning of Anna Karenina that “happy families are all alike; every unhappy family is unhappy in its own way.” I suppose we might as well replace the word “family” here with “individual human being”. Looking around us, we would find many people unhappy for a thousand and one reasons. But... VIEW ESSAY

In Charles Dickens’ Great Expectations, Pip, the main protagonist in the story, is very idealistic and yearns to become a gentleman. He wants to better himself and rise above his humble origins in hopes of winning over his love Estella. Pip is also a very kind man and cares about the ones who are close... VIEW ESSAY