What Happens When College Athletes Get Paid?

Two out of every five Division athletes mom from single parent homes and athletics are their only opportunity to provide a future for themselves and their families. It is not easy for these students to get jobs because their schedules are already full. For example, many division I football teams practice twice a day. A day for a division football player could look like this: practice-6 a. M. , class-9 a. M. , class-1 1 a. M. , and practice-2 a. M. By the time they are done with the second practice of the day their day is practically over.

Don't use plagiarized sources. Get your custom essay on
“ What Happens When College Athletes Get Paid? ”
Get custom paper
NEW! smart matching with writer

They still have to eat dinner and possibly do homework. This leaves no time to get even a part-time job. It also raises the question of how these athletes obtain extra spending money? If you are an athlete like Johnny Magazine, who comes from a rich oil family, money comes easily and is not a concern. For those who are less fortunate and come from a single-parent home or from a poor household the money does not come easily.

So when a coach approaches and says, “Herr let me buy you lunch,” many kids do not think twice and accept the $20. This goes against NCAA rules and if found out there is an investigation that could result in a suspension.

College athletes can observe while walking to class or on the field students wearing jerseys with their name and number on them. Schools can charge anywhere from $50-$70 for a jersey like that, and where does that money go? It goes directly to the school and the athlete whose jersey is being worn all around campus will not see a dime of it.

In the early ass’s while the FAA Five was at the University of Michigan, Chris Webber, Galen Rose, Juan Howard, Jimmy King and Ray Jackson started a college basketball revolution. Michigan became the first school to ever Start five freshman in a college basketball name. These five wore baggy shorts and black socks. They took the nation by storm and soon Michigan merchandise was flying off the shelf. None of the FAA Five saw any compensation and when they took notice of what was happening they started to question why. It is well documented in the ESP. film The FAA Five; all five wondered why they were not seeing any dividends from all the merchandise being sold. Galen Rose came from a rough neighborhood in Detroit, so he fell into the category of the struggling college athlete. He admits during the film to taking money at times to buy pizza. C

urrent Houston Texans running back ARIN Foster said he received money on the side while he attended the University of Tennessee. In a recent Sports Illustrated article he said, ” I don t know if this will throw us into an NCAA investigation-?my senior year, I was getting money on the side (Sports Illustrated, 2013). ” He went on to say, “l really didn’t have any money. I had to either pay the rent or buy some food. I remember the feeling of like, ‘Man, be careful. ‘ But there’s nothing wrong with it. And you’re not going to convince me that there is something wrong with it (SSL, 2013). This is the feeling of many college athletes that were in the same boat or that are currently in the boat. They may not know where their next meal is coming from or how they are going to afford a car payment. Many will take money and not even question it. They know what they are doing is wrong and they are putting themselves and the school in jeopardy. At the time the reward is worth the risk they are taking.

There are many other cases happening across the country that no one knows about. It is interesting how Foster came out and said how he felt that it was not a big deal and that he did not think he was ongoing anything wrong. He would fall into a large percent of college athletes that feel it is unfair for them to not see anything from all the revenue they bring in. Many will argue that college athletes do not need to be compensated because they are student-athletes; and the key word for them is student. One argument against paying college athletes is that they are basically receiving a free education from a top school. A four-year scholarship will cover everything a student-athlete needs. This includes: tuition, room and board, books, medical coverage and meals. For example, Duke University costs $57, 1 80 to attend (Bleacher Report, 2013). Those on an athletic scholarship at Duke are receiving a high quality education and are paying practically nothing for it. This is the main argument that those against paying student-athletes use. Most college athletes will not turn professional and therefore will need the degree from whatever school they attend to obtain a job after graduation. Those who are talented enough to be drafted into the professional ranks of their sport will sometimes forgo obtaining their degree n favor of the money offered at the professional level.

The downside to this is that an injury can end their career before it even starts; and those that did not obtain their degree will struggle to find a source of income if they are forced to quit or retire from their sport. Another argument used is that student-athletes are not really worth anything until they reach the professional ranks (Bleacher Report, 2013). Those who use this argument believe that if a student-athlete is good enough to get paid then they will be compensated when the time is right. However, this overlooks the efforts of athletes who play all throughout college, yet do not make it to the professional level. There are many other arguments used but a common one is paying college athletes will not eliminate scandals. Scandals are not new to college sports. There have been numerous point shaving scandals and the argument is that even paying college athletes will not Stop those scandals from happening. Paying college athletes is a hotly debated topic and will be so for the foreseeable future. There will be well made arguments for both sides; but in he end college athletes need to receive some sort of compensation.

What Happens When College Athletes Get Paid?. (2020, Sep 06). Retrieved from https://studymoose.com/what-happens-when-college-athletes-get-paid-essay 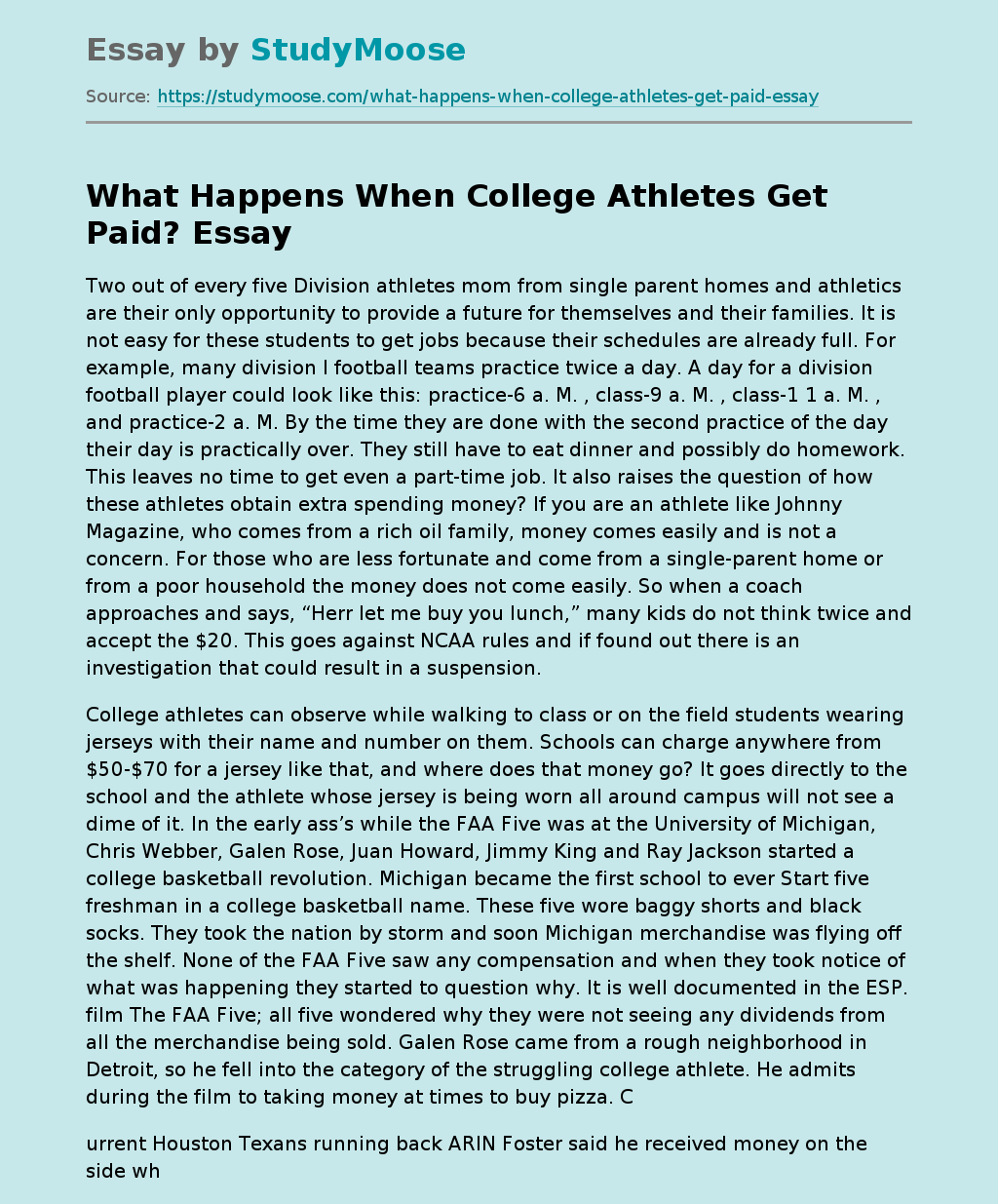