What Does Mean to Be Jesuit

What is the motto of the Ateneo? What is the aim of the Ateneo for its graduates? If you ask any alumnus, his only answer would be that what encapsulates the true meaning of being an Atenean is being Lux-In-Domino. I, too, agree that the phrase is the perfect characteristic an Atenean has. This motto is specifically found in the old and new seals of the Ateneo. These seals are not mere distinction that a person is more or less an Atenean, but of greater symbolism, a promise and inspiration on how to live life the Ateneo way.

Don't use plagiarized sources. Get your custom essay on
“ What Does Mean to Be Jesuit ”
Get custom paper
NEW! smart matching with writer

With this in mind, the Ateneo decided to give this as an award entitled, “Lux-In-Domino Award”.

This is, by far, the most prestigious honor that “illuminates the purpose and aims of the University which point that the Ateneo is Filipino, Catholic, and Jesuit. ” But first, allow me to give a brief background on the said award. According to the Ateneo website, the phrase Lux-In-Domino was taken from St.

Paul (Ephesians 5:8) “For you were once darkness, but now you are light in the Lord. Live as children of light. ” In simple terms, Lux-In-Domino means “light in the Lord”. The award was first granted back in 1986. It aims to give honor to the alumni or alumnae who lived a life by being Light in the Lord.

The recipients of this award must have lived their lives by being moral examples of service to others, more specifically to the Filipino people. The awardees must have sought service to and for his/her fellow brethren to promote genuine national development.

Let’s take for instance Bobby Gana, a lawyer of SALIGAN (an NGO), who unfortunately died in a plane crash February 1998. He, together with his co-lawyers, was supposed to conduct educational seminars and meetings on the legal aspects of the party-list elections, local governance and agrarian reform in Cagayan De Oro.

After graduating, he spent his life in service, devoting himself for his fellow countrymen. This made him a true example of being a Lux-In-Domino. It is not only by being of service to the Filipino that makes this award of great importance but how it is supported and guided by the Catholic teachings of the Church. According to the most recent awardee, Alfredo R. A. Bengzon, when he gave his response speech upon receiving the award, the most fulfilling experience out of his work in the Philippine community was his clearer and deeper capture of the Spirit of Otherness.

Not only that he made a difference for the benefit of our country, but he did it aligned with the Catholic Church. As he brainstormed through a lot of ideas on how he would be able to help, the guidance of the Bible helped him a lot through his thought processes. In return, he was able to ensure that health become a basic human right. Being of service to your country and being constantly directed towards the implementation of the teachings of the Church brings about only the blood and soul that runs the Ateneo campus: Being a Jesuit.

Contrary to popular belief, being Jesuit mean not only have to wear black robes with a white neck belt, nor having a pre-divinity track course. It is being generous and self-giving in service, expecting nothing in return. Being a Light in the Lord reflects back to the prayer of Saint Ignatius of Loyola. “.. To give and not to count the cost, to fight and not to heed the wounds, to labor and ask for no reward, – save that of knowing that I do Your most Holy will. ” It is by giving our fullest of selves that we be more or less illumiare to others.

What Does Mean to Be Jesuit. (2017, Feb 16). Retrieved from http://studymoose.com/what-does-mean-to-be-jesuit-essay 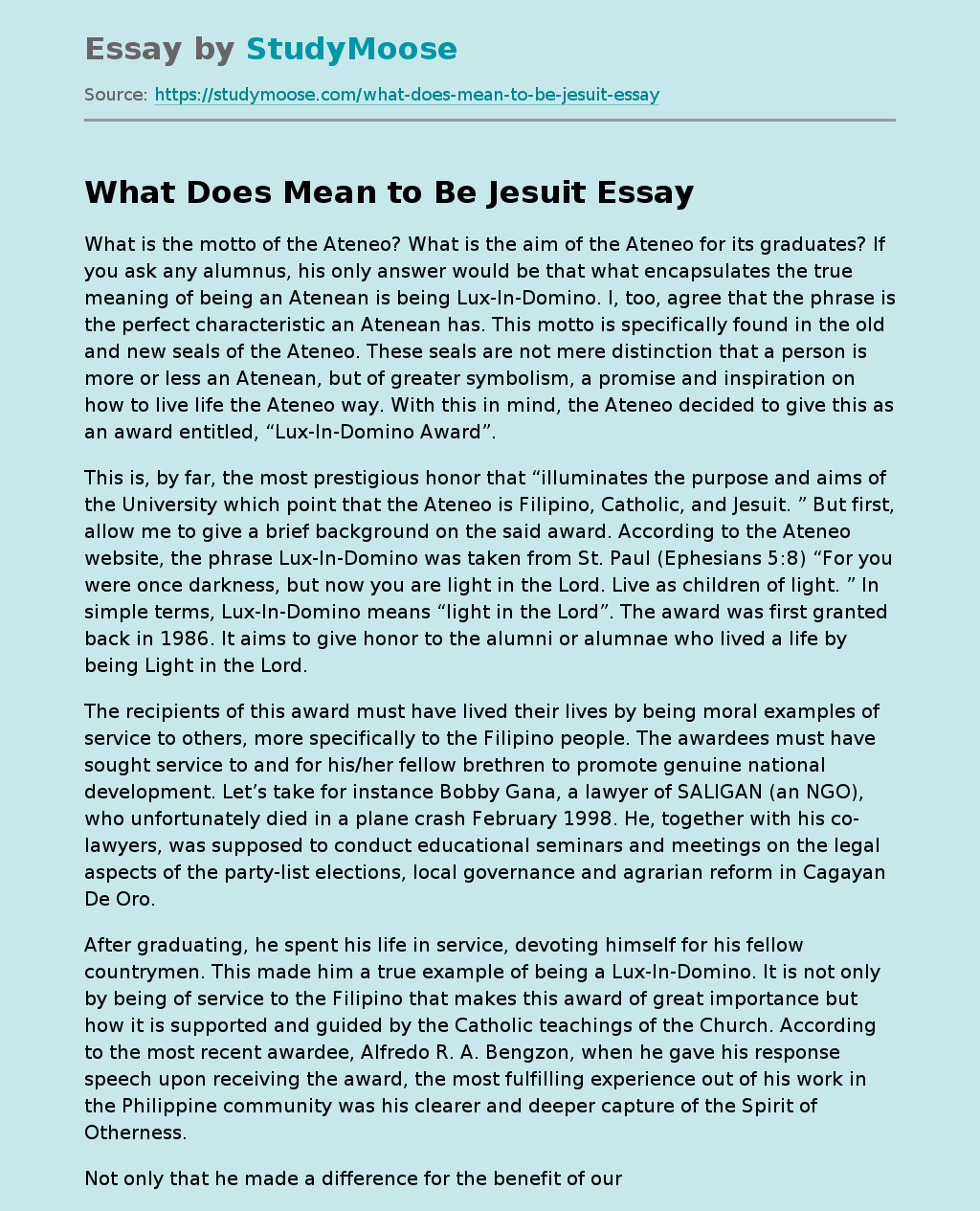