What did Machiavelli mean by the statement “the end justifies the means”?

What did Machiavelli mean by the statement “the end justifies the means”? Analyze why it is still relevant to leadership today. Support with examples.

Niccolo Machiavelli watched as French, Spanish, and German armies wreaked havoc on Italy in 1469-1527. He became convinced that political unity and independence were ends that justified any means. Machiavelli meant by “the end justifies the means”, that the end result of an action was justified by the actions you took to get there. This famous quote is relevant in leadership today by examples of Harry Trumans dropping of the atom bomb, Hitlers final solution, and the attacks of 9/11.

Don't use plagiarized sources. Get your custom essay on
“ What did Machiavelli mean by the statement “the end justifies the means”? ”
Get custom paper
NEW! smart matching with writer

“The end justifies the means” was expressed in Truman’s decision to drop the atom bomb on Hiroshima and Nagasaki. Truman wanted to drop the bombs on military bases because the Japanese attacked America. He saw this as a more timely end to this war and retaliation back at the Japanese. “The end justifies the means” in this case is relevant to today by Truman’s decision (or means) to drop the bomb was ended with 90,000 residents of Hiroshima and Nagasaki dying instantly.

The deaths (end) was justified by his decision (means).

Hitler’s final solution is an example of the “end justifies the means” effect on leadership today. The death of about 12 million people was the end that was justified in Hitlers cruel view and actions on the fact that the Aryan race was perfect and all others were inferior.

Osama bin Laden was the leader of the al-qaeda group that on the morning of september 11, 2001, committed 4 suicide attacks. The 19 terrorists hijacked 4 passenger jets, 2 went to the twin towers in New York, 1 to the Pentagon, and 1 was thought to of been heading to the white house (but crashed in a field). 2,996 people died from these terrorists attacks and more than 6,000 were injured. Machiavelli’s “the end justifies the means” is relevant in this act of leadership of bin Laden. The end in this case was the deaths of innocent Americans, national security being stricter, and bin Ladens death in May 2011. The means to justify these ends (his death) was bin Laden’s decision and organization to these attacks on innocent Americans.

“The end justifies the means” is relevant in leadership today by Truman’s leadership position and decision to drop the atom bomb (means) and killing hundreds of thousands of people (end), Hitler’s cruelty on non aryan races ( means) lead to the death of millions (end), and Osama bin Laden’s organization of terrorists to attack Americans (means) lead to the death of thousands of Americans, tighter U.S. security, and his death (end).

What did Machiavelli mean by the statement “the end justifies the means”?. (2016, Apr 21). Retrieved from https://studymoose.com/what-did-machiavelli-mean-by-the-statement-the-end-justifies-the-means-essay 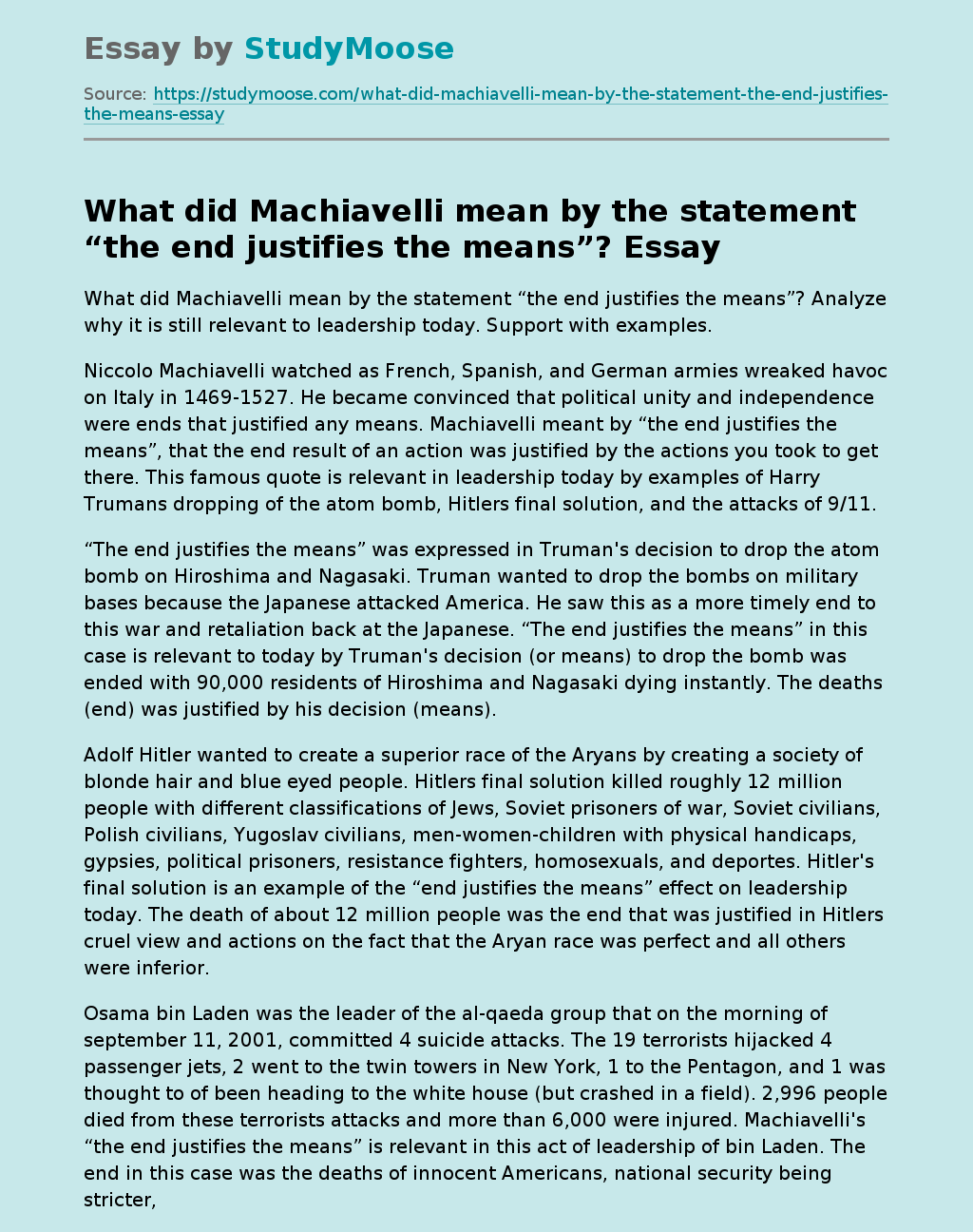