What Caused the Dust Bowl?

During the 1930’s, giant sand and dust storms hit the western horizon. Many families across the nation were struck with the Depression, however, families living across the Southern great plains were not only struck with Depression, but also by 300 dust storms that ruined all their land. The main reasons for the cause of the Dust Bowl were the geography of the Southern Great Plains, heavy machinery, and extremely dry climate.

One of the main causes of the Dust Bowl was the geography of the Southern Great Plains.

Don't use plagiarized sources. Get your custom essay on
“ What Caused the Dust Bowl? ”
Get custom paper
NEW! smart matching with writer

A sheepherder from the west said, “Grass is what holds the Earth together.” (Doc B) Although the grass in the region was not very tall, the grass and its roots were a barrier that kept the soil and sand in place. Wheat farmers plowed the short grass leaving the dirt exposed and unprotected when the strong winds struck, creating massive dust storms as the wind picks the dirt up.

Next, the heavy farming machinery being used destroyed the plains and eventually led to the Dust Bowl.

Proficient in: The Dust Bowl

Fred Folker, a farmer, purchased and used a tractor that did the work of ten horses. (Doc C). By using this new tractor, Folkers was able to produce a greater amount of goods than before. On top of that, this tractor also increased the amount of shortgrass destroyed. The number of acres that were harvested between 1899 and 1929 doubled in eight Great Plains states (Doc D). This new, heavy machinery that many farmers used crushed the dirt and soil into smaller pieces and could easily be swept up into the air by the winds.

To finalize, the Dust Bowl was a very depressing time. Families and people were struck by massive storms of dust, along with the Depression. If it wasn’t for the geography of the Southern Great Plains, heavy machinery, and the extremely dry climate, the Dust Bowl would have never existed, and times back then would be much easier.

What Caused the Dust Bowl?. (2016, Sep 23). Retrieved from https://studymoose.com/what-caused-the-dust-bowl-3-essay 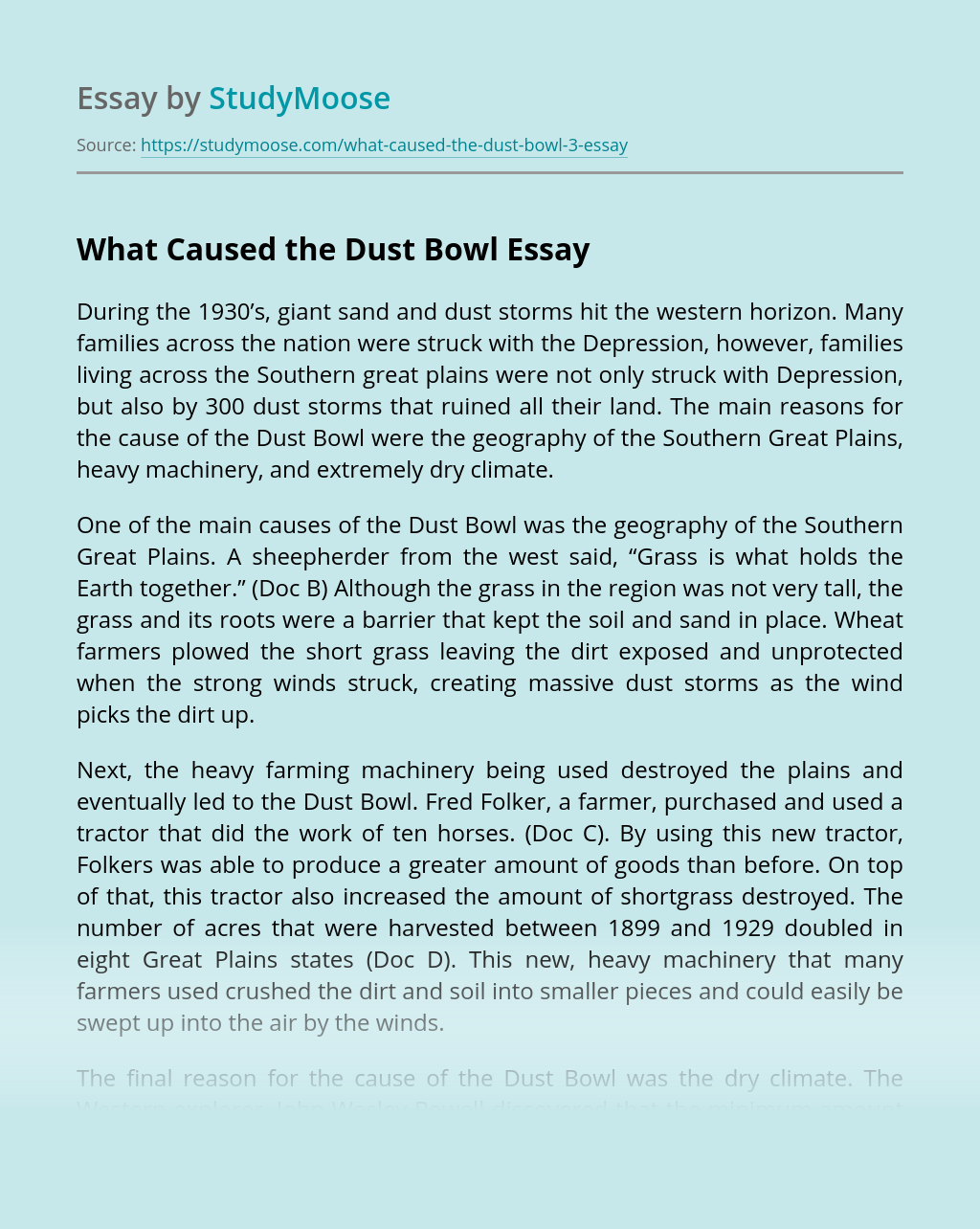