What Are The Effects On Children Of Single Parents?

This research focuses on the effects of children growing up in a single-parent household, instead of living with both parents. The motive of this is to foreground the growing ideal apprehension and difficult social challenges children face that lives in single-parent homes. Children are intended to grow in a family environment where both parents take their roles in raising the child. In recent years, there has been a sudden increase in the circumstances of single-parent families. Single parent families come across challenges in raising their children.

Don't use plagiarized sources. Get your custom essay on
“ What Are The Effects On Children Of Single Parents? ”
Get custom paper
NEW! smart matching with writer

While I was researching how single parenting influences children, and how single parents can lead their kids away from these trials and tribulations, it’s significant to look at the different elements that can have a negative effect (Miller 2001). The issue is not certainly single-parenting, but a composition of economic coerce unreliability, and dispute amongst the parents. Essentially, single parenting has an impact on a child. A single parent with enough assets may cater a stable environment in which children develop just as well as those who have both parents.

On the contrary, a single parent who’s just getting by and has very little time, energy, or skill for parental responsibilities might have children who are at risk of problems (Kelly 2015).

Despite the fact, the numbers are rapidly increasing, the children with single parenthood still have a controversial role in society. Single parenthood has been the most stereotyped concern in the socioeconomic. It is becoming more common in this day and age, it is considered a non-traditional because that is what most of us used to seeing.

The reality is that single parenthood makes up a majority of our population. Among the racial and ethnic groups, there are approximately thirty percent of households with children including a single parent (Population Reference Bureau 2001). The bigger issue is whether or not, there are some negative and positive outcomes on children with single-parent families.

Every year there are more than one million babies that are born into an unmarried woman, which means that one-third of all children are brought into the world without a father figure. A single-family parent can result in many circumstances such as the death of the other parent, a parent who was never married, or a single adoptive or foster parent. These families inhabit in different areas, whether it’s big cities, suburbs, small towns, rich neighborhoods, and even in the poor. Single parents could face some good, some bad changes. They could experience the changes happening all together, which could be really frustrating because sometimes they have very little or no control of what’s occurring. They may suffer financially, mentally, physically, and emotionally.

Surviving in a single-parent household can be quite difficult for the family. The single parent may feel stressed because of the additional responsibilities for tending to a child and their needs, keeping up with the bills and household tasks, and working a job, maybe even two. And typically, the family’s finances and resources are limited, due to only having one parent. Single parent families deal with much other coercion and future problem areas that other families may not encounter.

The main factor that single parents often struggle with is financially making a way for their family. Half of all risks to these children stem from the connection between finances and making unsatisfactory in school, as with a child who feels they should quit school to help make ends meet. A single parent juggling with two jobs may have less time to help with homework and have less control over his or her kids (Miller 2001).

Furthermore, children who have been through a divorce are more likely to suffer from depression, emotional stress, and difficulties in school. Teenagers from single-parent families were found to be more likely to be depressed than those living with two parents. Criminal activity is also more related to single-parent homes (Haerens 2016). Children from single-parent homes are more likely to exhibit violent behavior.
This doesn’t mean that problems found in single-parent homes are because of the parent who raises the children. It can be associated to things other than single parenting. Single-parent households are generally less well-off financially and this may be a major cause of family problems. Low-income families face issues of lower education levels and lower economic achievement which can often leave the child feeling isolated and lonely (Vangorodska 2012). As well, children in single-parent households have little to no supervision, because by having the only parent in the households, that’s most likely not at home, due to being at work most of the time. It’s also less communication between the child and the parent.

What Are The Effects On Children Of Single Parents?. (2020, Sep 28). Retrieved from https://studymoose.com/what-are-the-effects-on-children-of-single-parents-essay 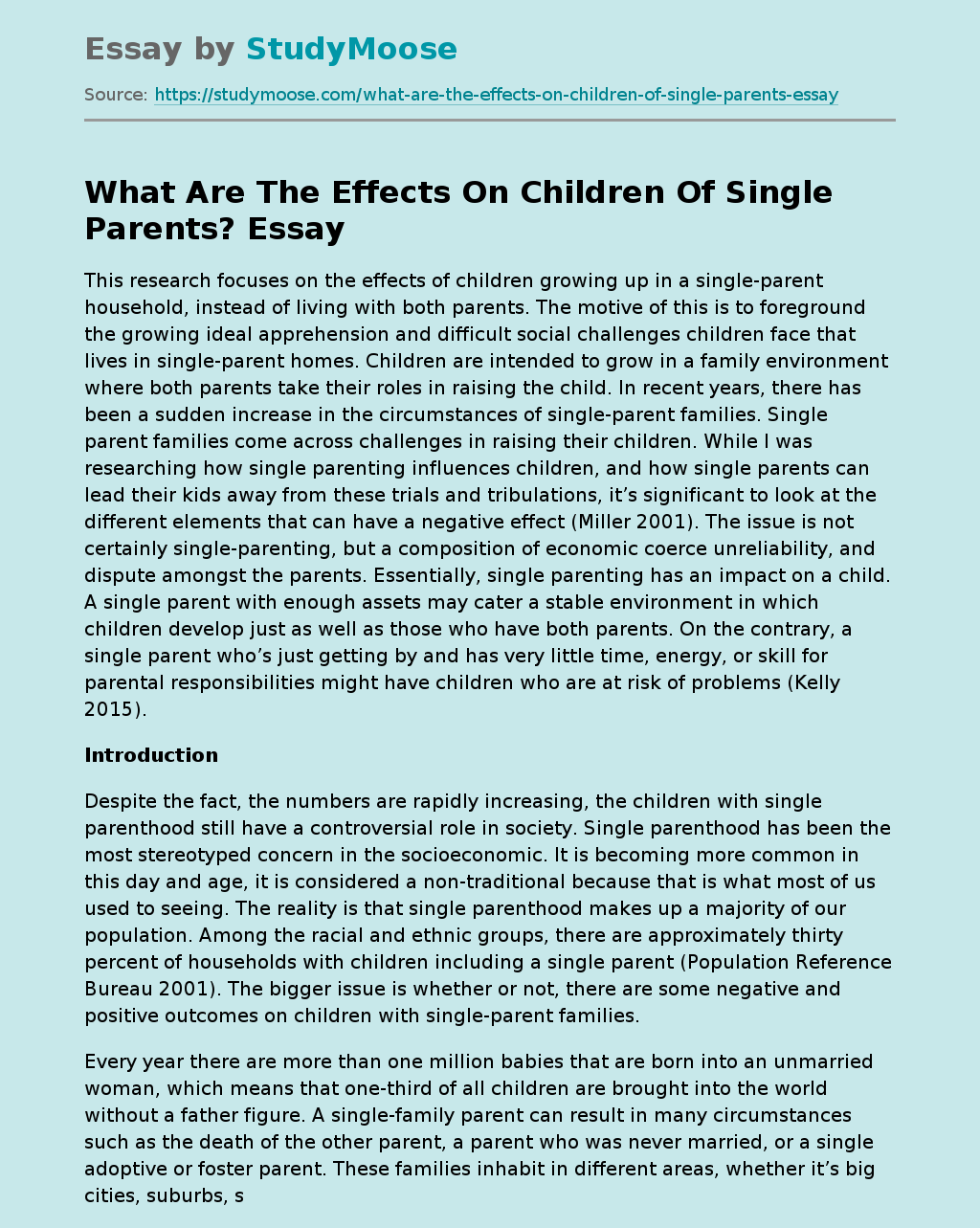