What Are the Different Types of Dementia?

Describe the types of dementia

Dementia is a common condition that affects 800,000 people in the UK, someone’s risk of developing dementia increases as you get older and the condition usually occurs in people over the age of 65 years old.

Dementia is a syndrome associated with on-going decline of the brain and its abilities. This includes problems with memory loss, thinking, speed, mental agility, language, understanding and judgement. People with dementia can become apathetic or uninterested in their usual activates and have problems controlling their emotions. They may also find social situations challenging. Dementia develops when parts of the brain that are involved with learning, memory, descion making and language are affected by injury or disease.

During the course of the disease plaques and tangles develop in the brain leading to death of the brain cells. We also know that people with Alzheimer’s disease have a shortage of some important chemicals which are involved in transmitting messages within the brain. Alzheimer’s disease is a progressive condition and symptoms become worse over time. (http://www.alzheimers.org.uk/site/scripts/services_info.php?serviceID=7) People in the early stages of Alzheimer’s disease may experience lapses of memory and have problems finding the right words. As the disease progresses they may become confused and frequently forget the names of people, places and appointments and recent events. E experience mood swings, feel sad or angry or scared and frustrated by their increasing memory loss.

They may become more withdrawn, due either to a loss of confidence or to communication problems. They may have difficulty carrying out everyday activities, they may get muddled checking their change at the shops or become unsure how to work the TV remote. As the disease progresses people with Alzheimer’s will need more support from those who care for them. Eventually they will need help with all their daily activities (IBID). While there are some common symptoms of Alzheimer’s disease, its important to remember that everyone is unique, no two people are likely to experience Alzheimer’s disease in the same way. Alzheimer’s disease usually begins gradually with very minor changes in the person’s abilities or behaviour. At the time such sings are often mistakenly attributed to stress or bereavement or in older people to the normally process of ageing.

It is often only when looking back that we realise that these signs were probably the beginnings of dementia. Loss of memory for recent events is a common early sign. Someone with Alzheimer’s may forget about recent conversations, repeat themselves, become slower at grasping new ideas, lose the thread of what is being said, sometimes become confused, show poor judgement or find it harder to make decisions. The person may also become anxious and agitated. They may experience distress over their failure to manage and may need some reassurance. If this is the case they you might have to talk to them and give them as much emotional support as you can. (http://www.alzheimers.org.uk/site/scripts/services_info.php?serviceID=7)

Some symptoms of Alzheimer’s Diseases are:

•Regularly forgetting recent events, names and faces.
•Regularly misplacing items or putting them in odd places.
•Confusion about the time of day.
•Disorientation, especially away from your normal surroundings.
•Getting lost.
•Problems finding the right words.
•Reduced judgement, for example, being unaware of danger.
•Mood or behaviour problems such as apathy, irritability, or losing confidence.
(http://www.alzheimersresearchuk.org/dementia-types/10000/alzheimers-disease/#acc0/)

There is still a lot to learn about what causes Alzheimer’s. Scientists know that during Alzheimer’s two abnormal proteins build in the brain. They forum clumps called either plaques or tangles. These plaques and tangles interfere with how the brain cells work and communicate with each other. These plaques are usually first seen in the area of the brain that makes new memories. A lot of research is focused on finding ways to stop these proteins in their tracks and protect brain cells from harm. (http://www.alzheimersresearchuk.org/dementia-types/10000/alzheimers-disease/#acc0/)

Vascular dementia is a common form of dementia that affects more than 111,00 people in the UK. The term dementia describes a loss of mental ability associated with gradual death of brain cells. Vascular dementia is caused by reduced blood flow to the brain because there is a problem with blood vessels that supply it. Parts of the brain become damaged and eventually die from lack of oxygen and nutrients. However unlike other forms of dementia many cases of vascular dementia can be prevented. Many cases of vascular dementia start with early warning signs that can be treated. This early stage is known as vascular cognitive impairment. If the disease is caught at this stage, the brain deterioration can be stopped and vascular dementia can be prevented. People with vascular cognitive impairment may begin to show dementia symptoms, such as slowness of thought, difficulty with planning, memory loss, trouble with language and mood or behavioural changes.

These symptoms indicate that some brain damage has already occurred and needs to be treated immediately. (www.bbc/vasculardementia/symptoms.com) Once vascular cognitive impairment progresses to vascular dementia the disease can only be slowed down, not stopped. At this stage the dementia symptoms will usually be much more obvious and may be made worse by depression. The exact symptoms will depend on which areas of the brain have been affected. The most common causes of vascular dementia is narrowing and blockage of the small blood vessels deep inside the brain. The medical name for this is subcortical vascular dementia or small vessel disease. Most cases of small vessels disease result from inheriting certain genes from your parents, so it is often seen running in families. Persistent high blood pressure is thought to play a role and many worsen the disease.

Problems with speed of thinking, concentration and communication
Depression and anxiety accompanying the dementia

Other symptoms associated with vascular dementia may include:

It is important to note that some of these symptoms may not always be direct consequences of the disease. Other factors can also play a part, for example visual misperceptions may be the result of poor lightening or the particular a way home has been decorated and some behavioural changed may be a consequence of care needs not being fully met. (www.nhschoices/dementia/vasculardementa.com)

Dementia with lewy bodies is a form of dementia that shares a characteristics with both Alzheimer’s and Parkinson’s diseases. It accounts for around ten per cent of all cases of dementia in older people and tends to be under diagnosed. Dementia with lewy bodies is sometimes referred to by other names, including lewy body dementia, lewy body variant of Alzheimer’s disease, diffuse lewy body disease, cortical lewy body disease and senile dementia of lewy body type. All these terms refer to the same disorder. Dementia with lewy bodies appears to affect men and women equally. As with all forms of dementia it is more prevalent in people over the age of 65. However in certain rare cases people under 65 may develop lewy body. (www.nhschoices/lewybody.com) Lewy bodies are abnormal microscopic protein deposits in the brain that disrupt the brain’s normal functioning causing it to slowly deteriorate. The effects include a degradation of cognitive functioning, similar to Alzheimer’s disease or a degradation of motor control, similar to Parkinson’s disease.

Depression is also common. Increasing problems handling the tasks of daily living- tasks that used to be simple may become difficult for a person with Lewy body dementia. Repeated falls and sleep disturbances- this includes insomnia and acting out dreams. Fluctuations in autonomic processes- this includes blood pressure, body temperature, urinary difficulties, constipation, and difficulty swallowing. (www.helpguyid/lewybody/dementia.com) The progression of symptoms will depend to an extent on the person’s personality and general health. Home based help will be needed and some people will eventually need residential care in a nursing home. The average survival after time of diagnosis is similar to that of Alzheimer’s about eight years. However as with Alzheimer’s disease this can be highly variable in different people. (www.nhschoices/lewybody/dementia.com)

At present there is no cure for dementia with Lewy bodies. Symptoms such as hallucinations may diminish if challenged, but it can be very unhelpful to try convincing the person that there is nothing there. It is sometimes better to try to provide reassurance and alternative distractions. (http://www.alzheimers.org.uk/site/scripts/documents_info.php?documentID=113) In this assignment I have learnt that there are many different forms of dementia all with different signs and symptoms, I learnt that some signs can be misread to other conditions and sometimes it can be hard to pick up dementia until it is too late. I have also learnt that some dementia can overlap with other types of dementia and with other conditions.

What Are the Different Types of Dementia?. (2016, Apr 22). Retrieved from http://studymoose.com/what-are-the-different-types-of-dementia-essay 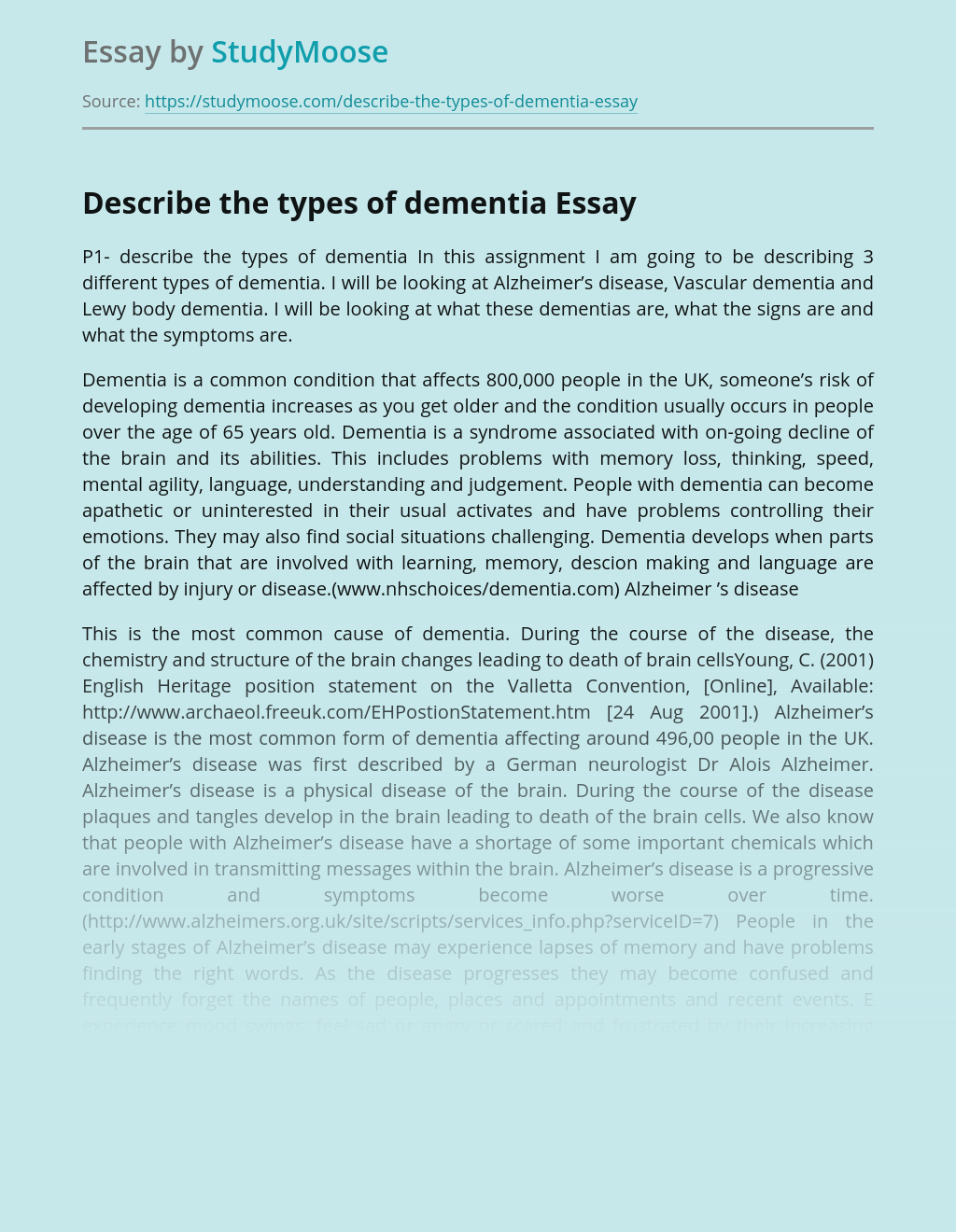 Don’t waste time
Get a verified expert to help you with What Are the Different Types of Dementia?
Hire verified expert
$35.80 for a 2-page paper
Stay Safe, Stay Original