Were The Upper And Lower Canada Rebellions in 1837 a Success?

Don't use plagiarized sources. Get your custom essay on
“ Were The Upper And Lower Canada Rebellions in 1837 a Success? ”
Get custom paper
NEW! smart matching with writer

To begin with, the rebellion in Upper Canada failed miserably because of the lack of military experience from the rebels, and, as a result, it wasnt very threathening.

The Upper Canada Rebellion was a lost attempt for change, which, at first, just resulted in severe punishment, such as death, flogging, hanging, and transportation, for the rebels.

Aside from providing entertainment from watching the public hangings, the government became more strict and severe, an unplanned result, although the government did begin to investigate the problems. In addition, the rebellion in Lower Canada also failed miserably and was short-lasted, thus it didnt have much of an impact immediately, as the government just arrested the leaders and supporters. By angering the government, the rebellions also caused the government to concentrate more on punishments for the rebels, such as transportation to Australia, instead of working on fixing the colony- an unplanned short-term result.

Aside from these failed rebellions, as severe punishments were the last thing on the rebels minds, their was no immediate impact on the colonies and the rebellions could very well have been done in vain.

However, even though the rebellions in both Upper and Lower Canada in 1837 didnt have a significant or planned effect on the future of the British colonies immediately, these rebellions definitely had a profound and positive long term effect on the colonies. After the rebellions, Britain, later on, realized that change was necessary in the colonies, and, thus, ordered Lord Durham to investigate the causes of the rebellions and his solutions, which would completely change Upper and Lower Canada forever. Because Durham realized that government was a major cause of the rebellions, he proposed a responsible government, which is a government in which the Executive Council is responsible to the elected members of the Legislative Assemblt. As a result, because of this drastic change in government that will eventually spread to the colonies, the rebellions did have a profound impact on the colonies in the long run, especially aknowledging that this was the first step towards complete democracy in Canada.

Furthermore, after his investigation, Durham also had a proposal to unite the colonies of British North America under one government for many reasons, including improving economy, trade, and travel. As it can be seen, if the rebellions didnt take place, Durham may never have had the opportunity to suggest such a proposal, another reason why the rebellions did have a significant impact on the colonies, which were later merged. And finally, the rebellions also caused some people to consider the problems of Canada in more depth, which also, in the end, resulted in Confederation, a process that made the colonies into one independent and democratic nation, in an attempt to fix Canada of its problems, including the ones that caused the rebellions. As we can see, the rebellions of Upper and Lower Canada had a significant impact on the British colonies in the long term, and it was, supposedly, the beginning of the formation of a new Canada.

The rebellions in Upper and Lower Canada in 1837 were significant events that affected the future of Canada. These rebellions were the first step toward confederation because it allowed others to see Canadas flaws, which, in the end, resulted in the a greater nation from coast to coast- one united Canada. Because of this vast country, Canada continues to remain properous in every aspect- politically, socially and economically, and because the rebelliosn led to a some-what democratic government (responsible government), Canada has slowly developed into one of the most democratic nations in the world today. And finally, without the rebellions, Canada may have, to this day, remain British property, as onfederation may not have occured, but, instead, Canada contiues to remain a prosperous and independent country.

Were The Upper And Lower Canada Rebellions in 1837 a Success?. (2016, Aug 03). Retrieved from https://studymoose.com/were-the-upper-and-lower-canada-rebellions-in-1837-a-success-essay 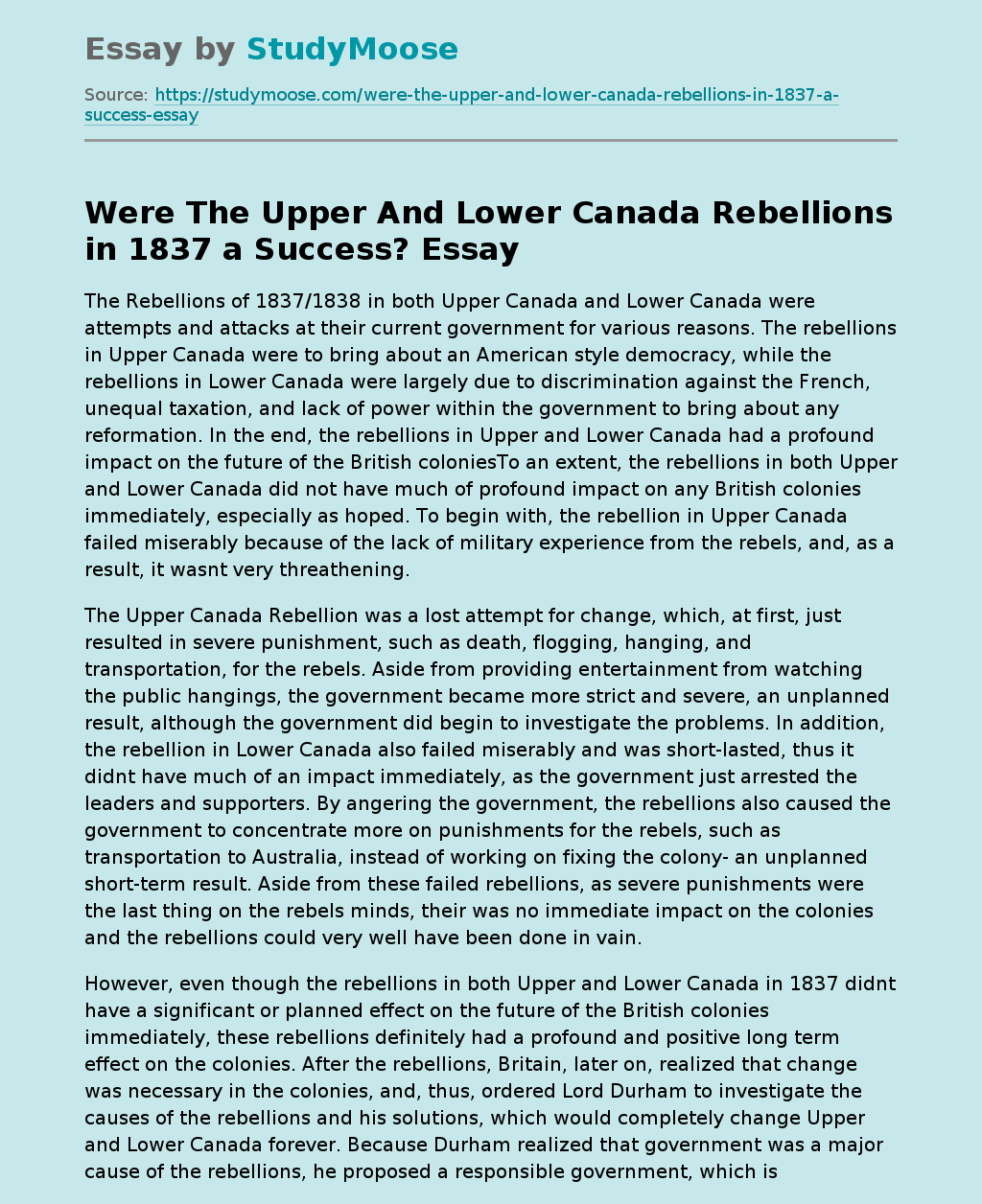