In this essay, I will be looking at the poems “Beeny Cliff” by Thomas Hardy and “On Wenlock Edge” by A.E. Housman. To compare and contrast the two poems I will explore the different techniques that are used to portray the feelings about the passing of time. I will look at the tones, rhythm pattern, alliteration, repetition and personification.

Don't use plagiarized sources. Get your custom essay on
“ On Wenlock Edge and Beeny Cliff – Compare and contrast the ways in which two poets communicate feelings about the passing of time ”
Get custom paper
NEW! smart matching with writer

In the 4th stanza there is an example of this on line 1:

“‘Tis the old wind in the old anger,

But then it threshed another wood.”

The tone makes nature sound very strong and unbeatable with phrases such as “in riot” and “threshed”. They also make the weather sound as if it’s annoyed with something and it will take down anything that is in its way.

“The woman whom I loved so, and who loyally loved me.”

But in stanza 5, line 3 the mood is different:

In the first passage the tone is joyful as the poet uses “loved” twice which is seen as something to be blissful to be loved or to love someone.

It also shows everyone is happy as it says “woman who I loved so” and “who loyally loved me”. In the second passage the tone is more sad and forlorn. “Nevermore” emphasizes that it will never happen again. It is also quite a sinister tone with phrases such as “nor knows nor cares for Beeny” and “laugh there nevermore”.

These phrases are sinister because they seem to say nothing happy will ever happen there again as they will not laugh at Beeny Cliff ever again and they do not care for it any longer as the woman is gone. In On Wenlock Edge the tone is the same throughout but in Beeny Cliff the tone changes. In Beeny Cliff the feelings the poem has of time are nostalgic; looking back on the good times and how things change over time. In On Wenlock Edge the tone shows throughout time the invincibility of nature beating everything else with the negative words it uses.

A comparison and contrast between these poems is the regular rhyme schemes have. They have different schemes though. The last words in each stanza follow the AB, AB structure. In the first stanza the last words of each line are:

But Beeny Cliff has a slightly different rhyme pattern. In each stanza the last words all rhyme with one another. In stanza 1 the last words of each line are:

The rhyme patterns that both of these poems have make the poems more flowing and easier to read. Beeny Cliff seems more like a song as the last word in each line of a stanza rhyme. But in On Wenlock Edge the AB AB rhyme scheme makes it sound more like a story. But with both poems the rhyme is flowing and makes it easier to read. The rhyming in both poems show that time is constant and never stops.

In Beeny Cliff in stanza 1 on the last line the alliteration phrase it uses is:

In stanza 5 on the first line the phrase it uses is:

In On Wenlock Edge both uses of alliteration use “H” which is a harsh sounding letter and it emphasizes phrases which show the ruthlessness of nature. It also says “‘Twould” which mean the wind will blow through it. “Heaving” sounds crowded and heavy as if nature is heavier than anything else. In Beeny Cliff “loyally loved” emphasizes love more with “l” which is very soft-sounding. But the phrase also sounds like something in the past that was true but is no longer true. But the second phrase of alliteration shows it is no longer calm and has different feelings to earlier in the poem.

It also uses nature like in On Wenlock Edge to show that things have changed and it seems more destructive with the use of “wild”. Beeny Cliff conveys feeling of happiness in the past and the feelings of change over time and On Wenlock Edge shows the toughness of nature throughout time.

Both poems use repetition to put more emphasis on important words. In Beeny Cliff on the last line in stanza 5 it repeats the word “nor”:

On Wenlock Edge repeats the word “old” in stanza 2, line 3:

“Tis the old wind in the old anger,”

In Beeny Cliff the repetition of “n” is negative. It conveys the feeling that it was once cared for but it is not any longer, the passing of time changes the way people feel for certain things. In On Wenlock Edge the repetition of “old” makes it sound like the wind has been blowing for a long time. “Old” also sounds as if it is tired but is continuing as it has “anger” it has had all its life. Both poems are looking at feelings that are happening at that moment but in both phrases they show signs of feelings from the past to the present moment.

A major comparison between the poems is the use of nature. In both, nature is personified. In On Wenlock Edge the woods are personified in stanza 1, lines 1 and 2:

“On Wenlock Edge the wood’s in trouble

His forest fleece the Wrekin heaves;”

In Beeny Cliff, waves and a cliff are personified. In stanza 2, lines 1 and 2:

“…the waves seemed far away

In a nether sky, engrossed in saying their ceaseless babbling say,”

In stanza 5, line 3 the cliff is personified:

In On Wenlock Edge the personification shows how nature can be stronger than man or as strong as man. The use of the words “trouble” and “heaves” sound as though the woods are becoming tired. In Beeny Cliff the waves seem to be happy and flowing at the time as they are “engrossed in saying their ceaseless babbling say.” Later on, however, the feelings about nature change. The cliff’s personification is not as happy. The cliff seems lonely as no one “cares” for it. Personification in both poems portrays feelings about different things in nature.

In conclusion, both poems use similar techniques to portray the feelings in each one. The poems are different in what they are trying to convey yet the similar methods seem to be suitable in both cases. On Wenlock Edge is telling the story of nature’s long battle with man and its destructive manner.

The uses of alliteration, repetition and tone help show how over a long period of time nature wins its battles. In Beeny Cliff the poem is told through the eyes of a man whose mood changes in the poem. At the beginning he is happy and contented but by the end he is sadder and shows the change over a short amount of time. Both poems convey negative feelings with their tones. On Wenlock Edge and Beeny Cliff use nature mainly to describe feelings and time but On Wenlock Edge shows the everlasting way of nature while Beeny Cliff uses nature to portray people’s feelings.

On Wenlock Edge and Beeny Cliff - Compare and contrast the ways in which two poets communicate feelings about the passing of time. (2020, Jun 02). Retrieved from https://studymoose.com/wenlock-edge-beeny-cliff-compare-contrast-ways-two-poets-communicate-feelings-passing-time-new-essay 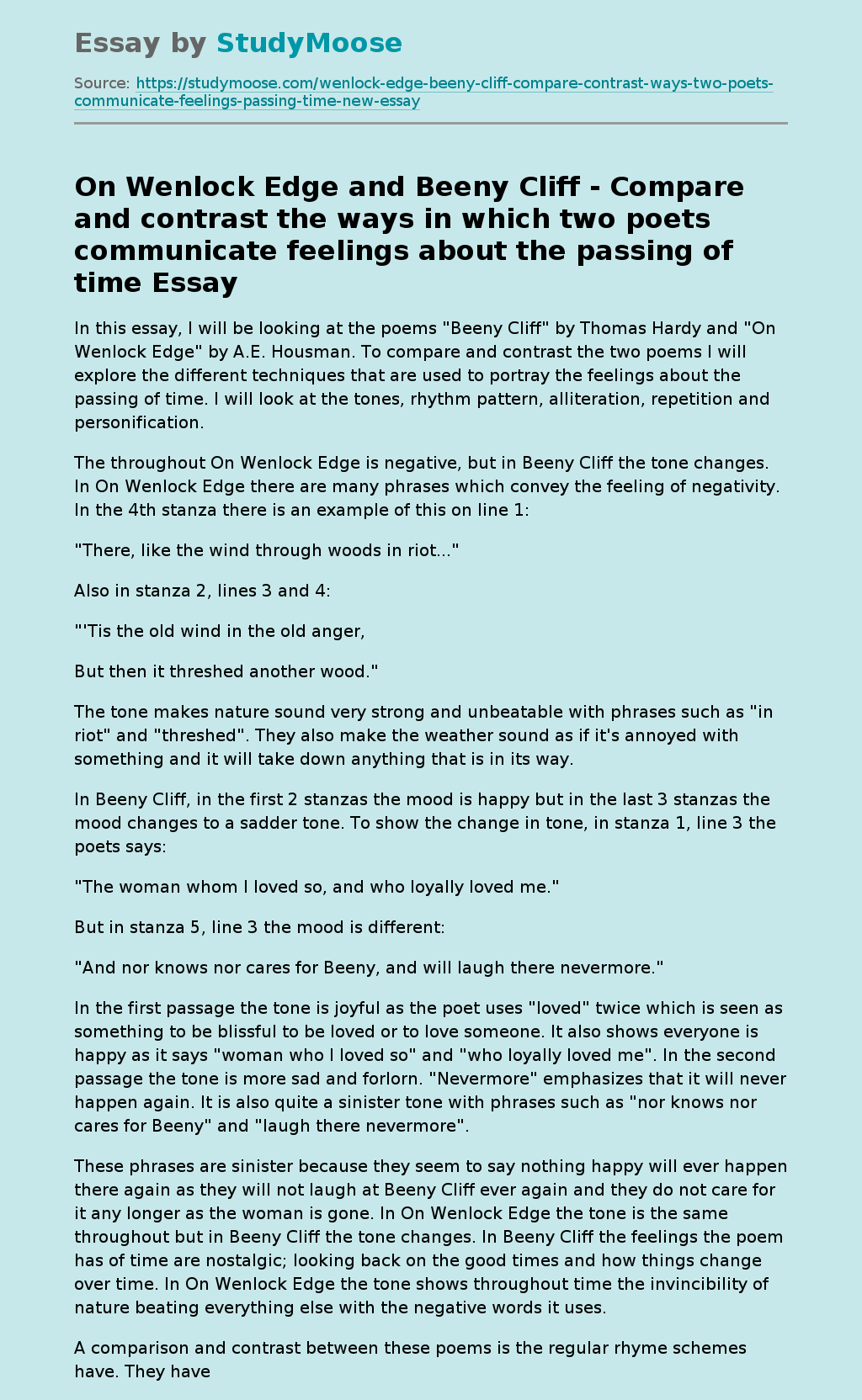