Welfare in the United States began during the 1930’s during the great depression to help families and individuals with little to no income with assistance. “Many Americans were unhappy with the welfare system, claiming that individuals were abusing the welfare program by not applying for jobs, having more children just to get more aid, and staying unmarried so as to qualify for greater benefits. (welfareinfo.org)” The question today is whether or not drug testing for welfare recipients should be allowed.

Don't use plagiarized sources. Get your custom essay on
“ Welfare Argumentative Paper ”
Get custom paper
NEW! smart matching with writer

Drug testing for individuals applying for government cash assistance should be mandatory before assistance is granted. Anyone willing to apply for a job or joining the military is subject to random drug tests. Anyone that works and pays taxes helps the welfare system. The reason testing could be justified would be how much fraud is generally found each year alone without drug testing and just by reasonable suspecion. “The Office of Inspector General (OIG) identified $16.67 million in fraud during Fiscal Year (FY)2011 within multiple Michigan public assistance program areas” (michigan.

Drug testing would save the government money and help distribute the benefits more to those who actually need it, by denying those who fail to pass a drug screening when applying. Many of the laws purposed would not deny benefits to the dependents the person may have, just the person applying. The dependent(s) would still receive the necessary help. Also the person who failed the drug test or has an apparent issue with legal substance abuse could be given the correct direction for treatment and get their lives going back in the right direction.

Drug testing is unjustifiable, ineffective, potentially unconstitutional, and worst of all being discriminatory. Besides it being an invasion of privacy, it’s in violation of the 4th amendment. Using illicit drugs may not even be the reason they are applying for welfare. People have a choice where they want to work, but not always a choice to need welfare. Also not everyone that is in need has a drug problem or does drugs. The cost to test every applicant would outweigh the amount saved denying benefits for those who tested positive.

There are alternatives to drug screening that would cost less and already a part of the applying process. Drug testing is a positive step towards many things in the welfare area, as with any job anyone is subject to random drug testing, why should welfare be exempt? Currently if reasonable suspicion was justified a person would have to submit a test anyways. The benefits show, in 2011, Florida passed the law HB 353 requiring all applicants for TANF benefits to be tested. Applicants must be notified of the drug testing requirement at the time of application, and are required to pay for the test. If they test negative the applicant will be reimbursed for the cost by adding the amount to their benefit check. The results from the first quarter of the law being passed (July-September) show the dramatic impact of Florida’s drug testing requirement for applicants for welfare cash assistance. The requirement has led to a 48 percent drop in monthly approvals, an overall drug-related denial rate of 19 percent, and almost $1.8 million in savings to taxpayers. Denials vary greatly by county, with at least one in three applicants being denied for a drug-related reason in 11 counties and no drug-related denials in another ten counties (floridafga.org).

This example shows the potential of savings for the government and taxpayers and also more available funds to the ones really in need. Drug testing applicants has many flaws when it comes to proving if someone may have a problem or is even using illegal drugs. Drug testing fails to show the biggest legal substances being abused by people on or off welfare in America, nicotine and alcohol. Drug testing isn’t even thought of when it comes to unemployment or applying for school financial aid. Drug tests often fail to show the results of people who are using more addictive and more dangerous drugs like heroin, methamphetamine, or cocaine, which can exit the body’s system in a matter of hours or a couple days. Drug testing may have it flaws, but not every person does more addictive and dangerous drugs. If one was doing those types of drugs they would need more than a cash assistance program to provide for their habit. School financial aid or unemployment is excluded because the people were either at one time working and got laid off or injured, and is in school to better themselves for a better job in the long run. Drug testing applicants may also help promote people to stay off drugs, as well as identify people who might have a problem. The biggest issue with people having a drug problem is being disqualified from employment for drug abuse.

Drug testing applicants would further help someone who may need help but doesn’t know how to get clean, or the right direction towards the correct help they need to stay free from drugs. Being free from drugs would then help someone not need welfare because they would be able to get a regular job in the work world, thus saving the government more money in the long run. The United States seems to be the only country with the issue of drug testing, but this could be a positive thing that could influence other countries around the world. The welfare program isn’t about helping people with drug problems get the correct help they need; it’s about helping those in need of assistance when they are low income or unable to afford their current situation. A bill passed would force drug screening but more than likely not get the person the correct help if there was a problem. The main objective is denying people assistance because of testing positive for drugs. Drug testing for individuals applying for government cash assistance should be mandatory before assistance is granted. The idea of drug testing individuals for eligibility of government assistance has many pros and cons. With many of the strengths being that it will help the funds that are available to help those people truly in need, and not helping people that don’t need help just because they can trick the system.

Taxpayers spend a lot of money to help support the welfare system and many want to see the ones that can afford to buy drugs or other non-essential items not be part of the equation. Another positive thing could be getting help to those who actually have a drug problem so they don’t have to apply for welfare and can go have a fulfilling job and life. But with all the strengths will come just as many weaknesses. Many of the weaknesses stem from drug testing itself to be immoral. The cost and regulation of drug testing could also hinder the benefits of the program, causing a deficit in the end overall. Many of the drugs tested may not be able to be screened properly, with the 2 mostly abused drugs legal being alcohol and nicotine. Not everyone that is low income has a drug problem or does drugs. The misconception view the public has of low income people is they just want to get free money and not have to work. I think the issue still remains that people do abuse the welfare system, and drug testing can help in part of making things more fair to those truly in need. That is just a stepping stone in a bigger overall solution of the flawed welfare system. One might question their morals before deciding on whether or not they actually need help, and then decide what the right thing to do is. But not everyone has good morals or even questions them when certain instances present themselves. 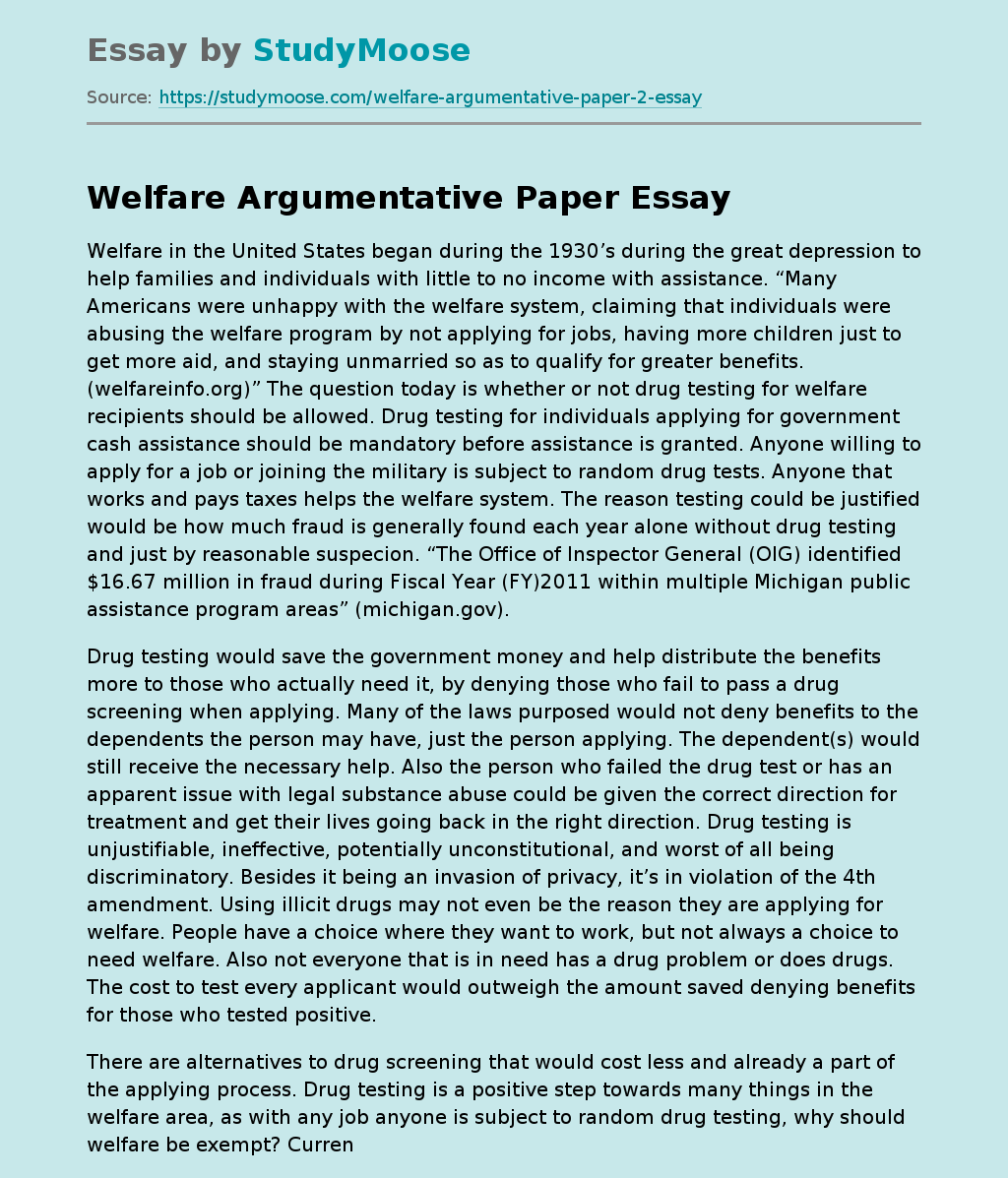