Directions: The state of Palestine was divided in 1947 to establish the nation of Israel, resulting in two separate homelands for the Arab and Jewish people. This land separation has sharply divided Arabs and Israelis for over 50 years, resulting in ongoing violent conflicts.

For this WebQuest, you will develop a historical understanding of the complex issues behind the decisions made in the Middle East, specifically in Israel/Palestine, by examining the multiple perspectives & agendas of the various parties involved. Use the following online resources to answer the questions below:

Answer the following questions:
1. Who is involved in this conflict?
Jerusalem
2. What region is at the heart of the conflict? Describe the claim that both groups have on this region.
Jerusalem, Palestine wants to make it an unified capitol of Judism
3. What is Israel? When was it founded and by whom? Is the modern city, founded in 1948 by Jewish settlers
4. What is the Zionist Movement?
The national movement of Jews and Jewish culture that supports the creations of a Jewish homeland in the territory defined as the land of Israel
5. Describe the role of the U.S. in the establishment of Israel, a Jewish state. The us voted in the diffirmative for the Israel’s statehood and encouraged others to do so.
6. How did the Holocaust affect the formation of a Jewish homeland? After the holocaust, people in Europe stopped their disregard for the Jews and their plight and that, is one of the main factors behind the creation of Israel.
7. What is the PLO? Whom does it represent?  Palestine’s liberation organization, they represent the Palestinians and the people who kill the israel’s
8. Which nations are opposed to a Jewish state?  Palestine, Syria, Iran, Lebanon, Gaza, and Westbank
9. What was the intifada? Who was involved and what caused it? Palestinian uprising against Israeli occupation in the Palestinian territories.
10. What caused the rise of militant Islam? What is its link to modern terrorism? An international political games to control the Islamic countries and the resources
11. What is Hamas? 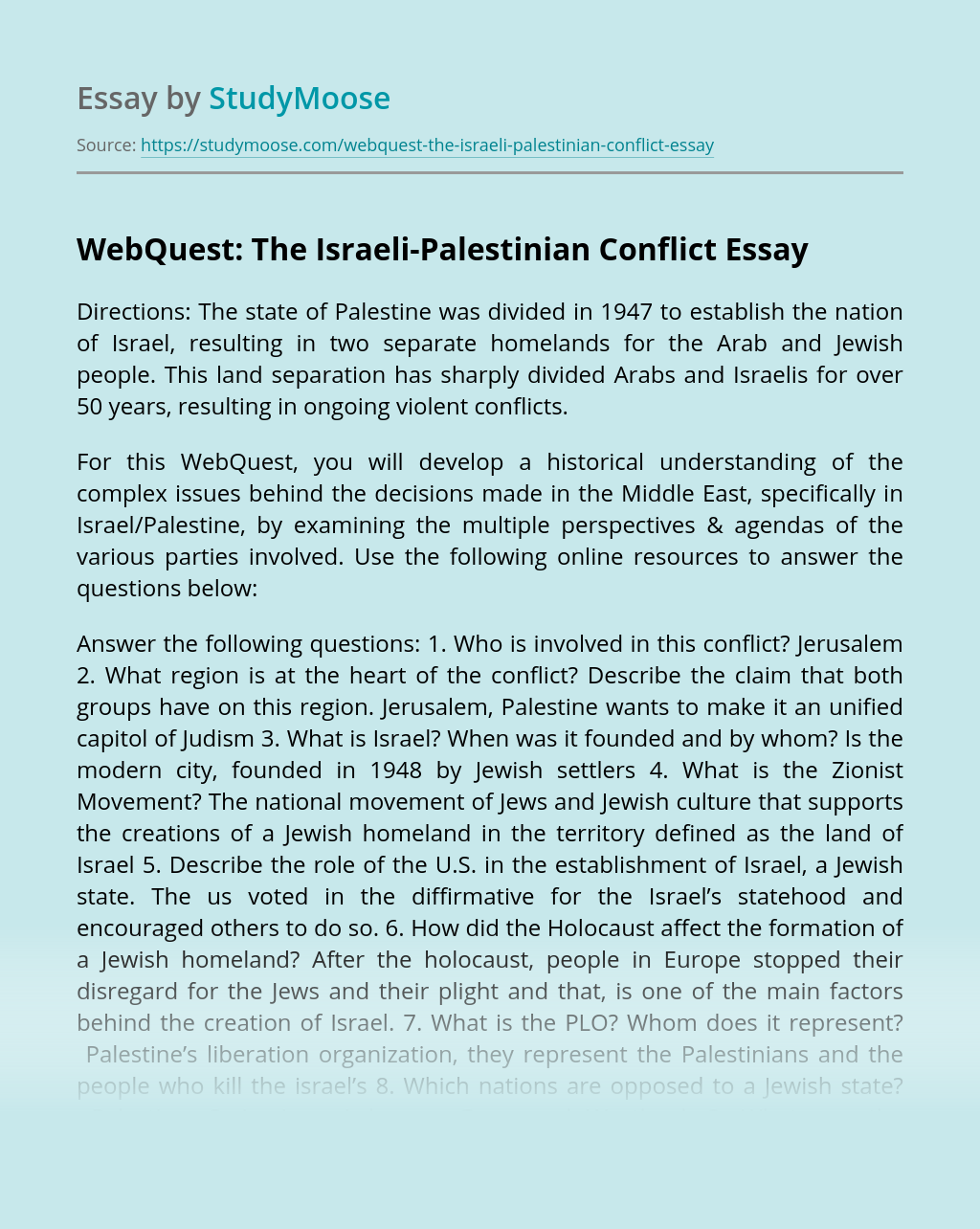 Turn in your highest-quality paper
Get a qualified writer to help you with
“ WebQuest: The Israeli-Palestinian Conflict ”
Get high-quality paper
Helping students since 2015
Stay Safe, Stay Original