How Rich Countries Got Rich and Why Poor Countries Stay Poor

Don't use plagiarized sources. Get your custom essay on
“ Wealth And Poverty Issues in Erik Reinert’s Book ”
Get custom paper
NEW! smart matching with writer

Reinert is not only an eminent scholar in his field, but also a distinguished entrepreneur. In 1972 he founded a small industrial firm that did color sampling to the paint and automotive industries. Later he developed the firm and added production plants in Norway and Finland, and by the time he sold it in 1991, the company had become the largest of its kind in Europe (Wikipedia).

Reinert is influenced by Friedrich List and it shows in his piece.

Reinert suggests that “globalization would have been a positive-sum game for all countries if the world has taken Friedrich List’s path to economic integration” (Reinert, 161.). Friedrich has developed his own theory about the timing of tariffs and free trade, and the sequence basically goes like this: (1) a period of free trade for all nations (2) a period when small states protect and build their own industries (4) a period when all countries establish their own competitive industrial sectors (Reinert, 161.

).After going through all the above steps, it’s time to open for global free trade and globalization will benefit the poor nations as well as the rich ones. Based on Reinert’s education level, the amount of research and publication he has done in the field of uneven development and his work experience, it can be concluded that Reinert is both qualified educationally and by experience to write this
book.

How Rich Countries Got Rich and Why Poor Countries Stay Poor is Reinert’s most recent English-language book and his purpose of writing this book is to find out the causes of poverty and to explain the mechanisms that produce the huge gap between the rich and the poor. He looks through the economic history of the past 500 hundred years and concludes the economic structure that most rich countries follow faithfully and eventually make them rich: industrialization policies first, free trade second. Once the rich countries become rich (e.g. the European countries), the type of economic understanding employed by them during their transition from poor to rich dies and they comes up with the completely different standard economics (abstract “high” theories) for export to poor countries. As a consequence, the standard economics, such as the Washington Consensus, proves to be damaging to poor countries and makes them even poorer.

It can be observed that the rich countries were those who emulated the leading industrial nations, such as the United Kingdom, into “the Age of Industry” (Reinert, 123.) Industrialization is the very first step towards success. With the effect of increasing returns and specialization, the benefit of industrialization goes much further. Industrialized countries take all the jobs that require high skills and technology, while the jobs industrialized countries can no longer mechanize or innovate further, such as straightening of the wire, are farmed out to the non-industrialized countries (Reinert, 39.) Rich countries produce mechanizable products while poor countries can only produce non-mechanizable ones and it explains why no country is able to get rich by only producing raw materials (Reinert, 134.). An industrial sector is essential for a country to become rich. As time zips by, technology and increasing returns, which are main sources of economic power, create economic barriers to entry and make it even more difficult for poor countries to catch up (Reinert, 40.). Rich countries specialize in the right economic activities also develop economic scale and as a consequence, more labor is needed to perform the tasks and the cost of each unit of product falls (Reinert, 40.).

Workers are paid more and the things they buy cost less. Both outcomes reflect the two ways to raise the standard of living: to receive higher wages or to lower the prices of goods (Reinert, 131.). On the other side, rich countries force the conclusions of standard economic policies which they would not apply at home, upon the poor nations that are under their wings, such as keeping the colonies as pure suppliers of raw materials (Reinert, 39.). The rhetoric-reality gap plays an important role in keeping poor countries poor. Another factor that is crucial to the poor nations is the timing of opening up of an economy because free trade tends to destroy the most efficient industries in the least efficient countries (Reinert, 251.). Most rich countries are industrialized before the free trade, so that when they enter the market, they are capable to compete with other countries and get the maximum benefits from globalization but for poor nations, the free trade is like adding frost to snow. In conclusion, Reinert sees the wealth as a result of industrialization, together with other factors such as increasing returns, synergies and he blames poverty for deindustrialization, and the wrong timing of free trade.

In general, I agree with Reinert’s opinion that industrialization and the timely free trade policy are the keys to wealth. The development path of China can be a perfect example for this. China was very prosperous during the Tang dynasty, and many western countries sent scholars all the way to China to learn from its success. But during the Qing dynasty, the government chose the policy of isolation and it destroyed the economic development of China. The Qing government restricted the external transport and foreign trade. Imported goods were heavily taxed. The variety and quantity of exported goods were limited as well. China isolated itself from others while many western competitors were in the process of industrialization. Many industrialized western nations were seeking new territories and the deindustrialized China without any advanced arms naturally became their target.

Effortlessly, their machine guns bombed the “locked” country. After that, China learned lessons and started to choose economic structure carefully. Instead of following the immediate economic integration, China followed the Marshall Plan whose goal is to reindustrialize. Fortunately, China chose the right economic structure this time and it was used as proof of the excellence of globalization while Russia, a country faithfully followed the advice given by the World Bank and IMF, experienced disastrous consequences (Reinert, 118.). Although China has gone back to the right track, but the fact that China is a developing country instead of a developed country demonstrates that the scar caused by the mistaken choice of economic policy and deindustrialization hasn’t healed. The story of China shows the consequences of failing to recognize the importance of industrialization and timely free trade. The failure explains why poor countries are poor and the presently wealthy countries are those who embrace the industrialization and capitalism.

Generally speaking, the book is well written. Reinert organizes the book by using sub headings to separate the content and drawing examples from the economic history to support his theories, which make the book more understandable and reliable. There are only a few graphics, a bibliography and a very long appendix at the end, suggesting there are a lot of facts and in-depth research behind the book. The only problem that I have with this book is the repetitiveness of theories. Reinert is very focused on his theme but sometimes he tends to overemphasize it by repeating the similar theories in different chapters. I would recommend the book to readers who have a particular interest in the topic of equalization, or the gap between the rich and the poor. Reinert discusses a lot of highly controversial subjects and people would want to find out the answers. 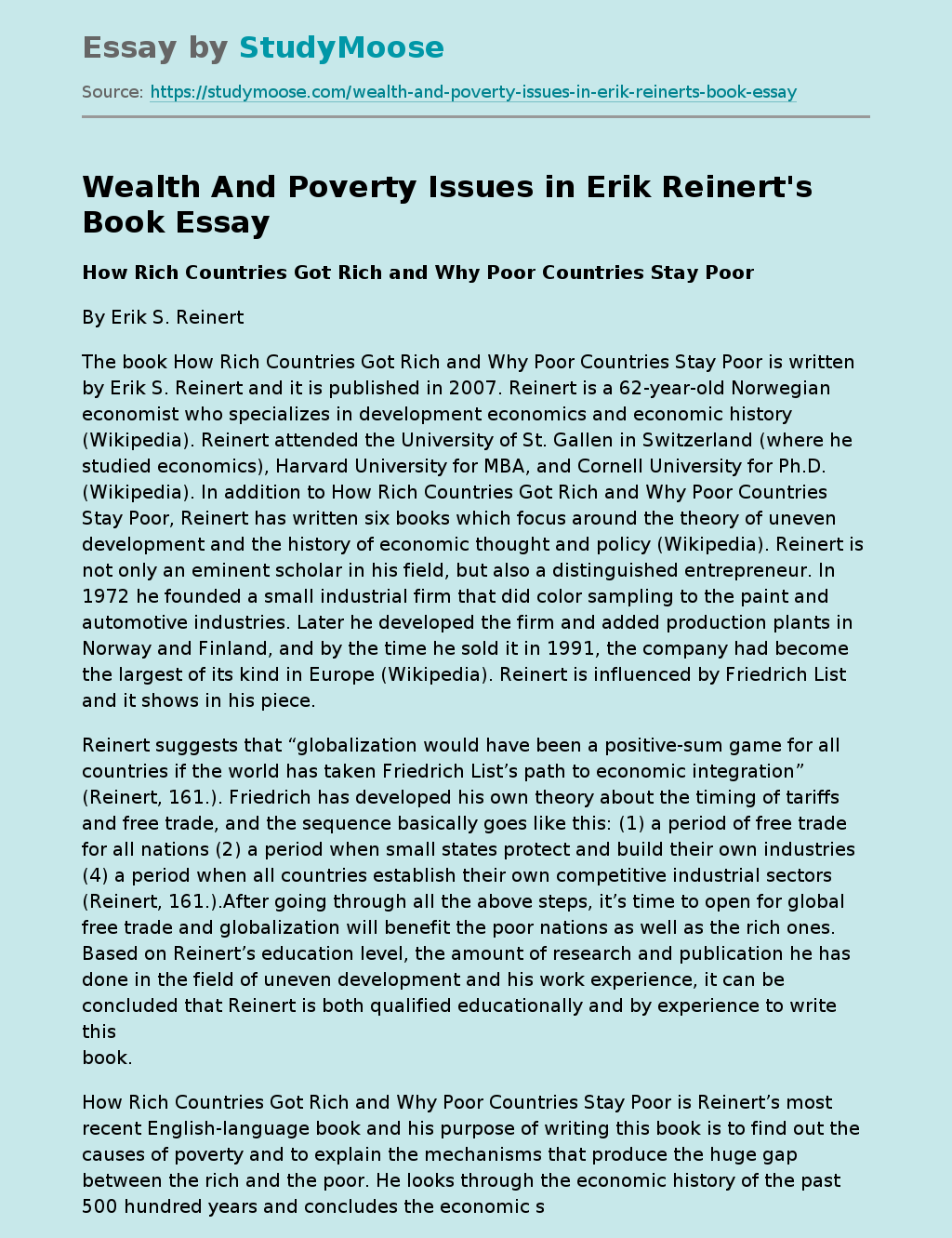