The turning point in the play "Romeo and Juliet"

‘Romeo and Juliet’ can be difficult to follow due to its language. This is because of the fact that the people in the play have strange names and are Italian. The language spoken is also different to the way we speak now. This is because it was written over 400 years ago.

Another thing that makes the play difficult to understand is remembering who is from what family the people come from. The only people I can remember are Romeo from the Montague’s and his best friend Mercutio.

Don't use plagiarized sources. Get your custom essay on
“ The turning point in the play “Romeo and Juliet” ”
Get custom paper
NEW! smart matching with writer

I can also remember Juliet Tybalt and the nanny from Capulets. I think this is because they are the main characters.

The original and modern versions of the play.

It is also confusing when you see the original and modern versions of the play. This is because they use different weapons. The original uses daggers and sword and the modern uses guns. I could understand the modern day more as I found it more believable.

The play does have an interesting plot. The plot is strong and interesting. It is about a forbidden love ending in tragedy. You can relate to this though as it still happens to this day. The play is interesting and draws audience in even though it is difficult to understand what they are saying. But you can guess what is going on if it is acted out well. We can see what the actors are doing. As they do this well.

This play also include a lot of humour even though you may not understand what is going on you know its happening.

Mercutio Romeos best friend is the main comedian. He always wants to be the centre of attention and is always cracking jokes. Characters like this are still around today.

The fight scene is the sort of scene Shakespeare’s and the modern audience would all enjoy. The reasons for this could be because we are all genetically programmed to enjoy fighting. Maybe there’s something in us from an early age that makes us excited of thrilled about fighting. Fights normally always attract people’s attention.

In Shakespeare’s time the theatres were very plain. There was never any sophisticated lighting or sound effects. There would also be hundreds crammed together in an area. That’s one reason why they have fight to attract the audience’s attention. Mercutio is the character that gets the fight scene going. The audience watching tend to laugh when they see him, he is like the jester. He acts the comedian and fool. Even his appearance is humorous. He is the strangest character in the play.

In the play he is very disturbing. During the ‘Queen Mob’ speech he appears to totally lose control. He shows he is not a total comedian. He has an angry side as well. He even follows the Montague’s hatred for the Capulet family. This is one of the reasons the fight scene starts. Until this scene I felt reasonably relaxed ‘Romeo and Juliet’s’ life together has gone reasonably well. They are married and are looking ahead to their future together.

The main hint that something is going to happen is when the Prince of Verona says that if anyone else causes blood loss on the streets again they will be executed. Tybalt is the only other character that worries. He bottles up his anger in his face and voice you can tell this went Juliet’s father does not allow him to throw Romeo out of the party, as he does not want to cause a scene.

Mercutio is the character that start the fight by saying to Tybalt ‘good king of cats, nothing but one of your lives, that I mean to make bold withal and as you shall use me hereafter dry-beat the rest of the eight. Will you pluck you sword out of his pilcher by the ears? Make haste mine be about your ears ere it be out.’

This is where the fight begins Mercutio is basically saying as you are king of cats why not use one of your lives and fight me. Even though both families are aware they are not allowed to fight this does not stop them. Tybalt is even angrier when Romeo says ‘I have to love thee’ Tybalt thinks Romeo is mocking him but the audience knows that he means it because Romeo has just married Juliet. Tybalt starts to talk back then they fight. Romeo is worried about trouble but infact he causes Tybalt to stab Mercutio by getting in the way. We the audience are all-aware that Mercutio is seriously injured but the other characters all think its another one of his jokes. Mercutio says ‘call me tomorrow….ye shall find me a grave man.’ Using the word grave is not the best as it could mean grave as in serious or dead. We all know he means dead. But all the actors believe he means serious.

After that Mercutio says ‘ a plague on both your houses.’ This ends up becoming true at the end of the play as ‘Romeo and Juliet’ both end up dying. Romeo then loses it and gets angry then he flips and kills Tybalt. Then before he realises it’s to late and he then has to suffer and pay the consequences of what he had just done. He says ‘I am fortunes fool.’

After this the play fortunes changes, which seems to cause bad things to happen to ‘Romeo and Juliet’. Romeo is banished and Juliet takes a potion to make her sleep. Romeos friend thinks she is dead so he sets of to tell Romeo.

The friar sends a telegram to Romeo to tell him that Juliet is not really dead. But the friend gets there first and tells Romeo. Romeo heads back to Verona to see her he ends up killing himself by her side. When she awakes and sees him she stabs herself and dies next to him. They are then both left to rest. Overall this love/tragedy play is written very well. The fight scene is the major turning point in the play. As from then on it just seems to get worse for ‘Romeo and Juliet’. Until they wend up dying. All of this happens because of the fight between Mercutio and Tybalt, which Romeo joins in with. Maybe the ending would have been different if Romeo had not intervened with it at all. We the audience cant help wondering what might have been.

The turning point in the play "Romeo and Juliet". (2020, Jun 02). Retrieved from https://studymoose.com/ways-fight-scene-turning-point-play-romeo-juliet-can-seen-relevant-modern-audience-new-essay 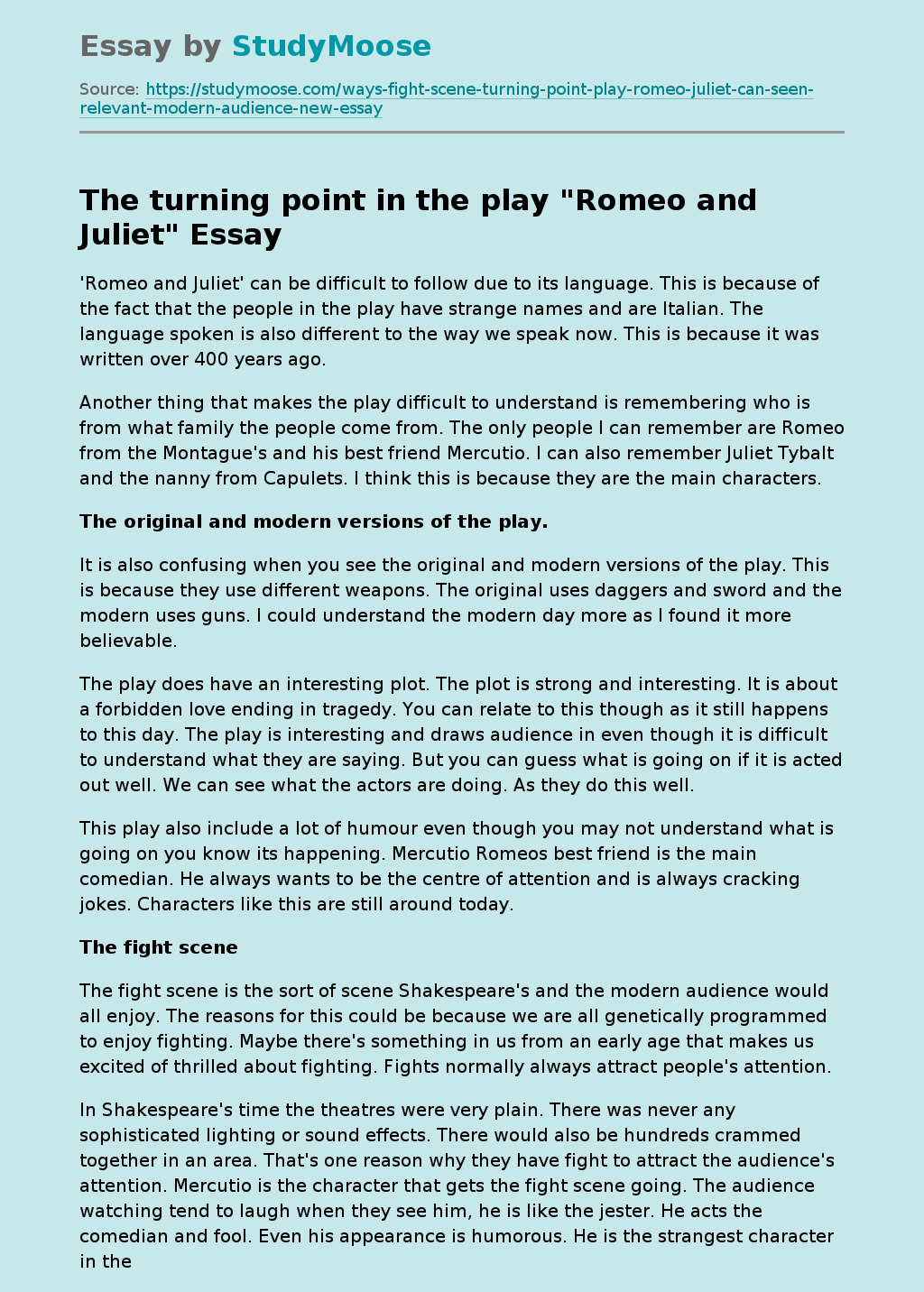