In what way does Charles Dickens win the sympathy of his readers for the children in his novels?"

A man born in the Victorian era in a working class family and environment, who had to work himself up from a working class child to a well-known figure that he is today. A man that is seen as a literary supreme, he is the senior of all the literary writers of his age. The period and circumstances have lead to the man being seen as a intelligent and unusual man in the field of literary work.

Charles Dickens shows his uncanny way of making people feel sorry (feel sympathy) for a group or section of a population.

Don't use plagiarized sources. Get your custom essay on
“ In what way does Charles Dickens win the sympathy of his readers for the children in his novels?” ”
Get custom paper
NEW! smart matching with writer

For example his usage of words in the way he uses them.

Through exaggeration of a characters description. This technique he uses and sometimes makes you feel hatred or even anger against a character or even a group of characters.

I have read one book where I found the above technique was being used and to a great extent, it was in ‘Great Expectations’, there is a section where Pip is having Christmas with the Mr Joe, Mr & Mrs Wopsle and Uncle Pumblechook.

To put it simple he has a meal where he is treated badly, with no respect even for the standards of how children were treated during he Victorian period. The perpetrator of this nasty behaviour was Uncle Pumplechook. He does a few things that might be seen as wrong and he is treated almost as a felon for the rest of the evening. Uncle Pumblechook treats him as a subhuman creature just because he is a child. He always says how the Children should be grateful for what they have and they are never grateful enough such as this “He should be grateful for what his parents have done for you ungrateful child”. Spoken by Uncle Pumblechook to Pip.

Charles Dickens uses the exaggeration of description a lot in many books and it is used a lot in one particular scene f Great Expectations that is the Christmas Dinner scene when his mother’s friends and family begin to arrive. This is a description of Uncle Pumblechook “A large heavy breathing man, middle aged man, slow, with a mouth like a fish ” This is only part of the full quote so you only get a small portion of the point of exaggeration of description, but even this bit shows how he made the man sound cold ugly very unflattering. It describes him as slow and heavy breathing, which could mean he was an alcoholic but at least makes him sound like one.

It is the type of words that immediately make you think of the person as nasty, unappealing even evil but at least a general dislike and the effect that Pip does not like him.

Also the name of the character you must take note of Pumblechook it brings to my mind a picture of a clown or someone who is not entirely competent at what ever he is doing. All theses ways are ways in which Charles Dickens has made you feel right from the start something odd about uncle Pumblechook even before you met him and heard what he had to say. This is how through exaggeration of description Charles Dickens shows distain for a character.

Charles Dickens also uses speech that is not used to a large extent in modern times. It makes you feel very different to how you will feel later.

In ‘Great Expectations’ when he is having a meal with the Pocket family, he bases almost the whole section of his book on the incompetence of a few adults and the unusual intelligence and diligence of a few children. The family is middle class and they live reasonably well especially in comparison to some others. The mother is the main fixture of incompetence in this book she has no idea how to look after children even though she has quite a few herself. The father wants to help but he does this by giving the children some money to go out and get out of their mothers hair or for their mother to get out of their hair.

This way he uses the incompetence of one member of the family to counteract at least to some extent the other member of the family’s incompetence, for instance the mother of the Pocket family goes against the young child in the pocket family which means that the girl has to get protected by the father. The father knows that something is wrong with the mother but he does not do anything to stop it.

Mrs Pocket a women, that is very proud on herself who thought that she was looking after her children to the best of her ability and to a very high degree. This is a very interesting quote from a mealtime with the pocket family that show the distinct area in which the members of the family worked. The quote is based at the table and the mothers burst into a fury because of something that her daughter says to protect another from being hurt. ” Mama dear’ ” lisped the little girl ” baby ood have put hith eye out.” And his was just a general concern froma child to amother to make sure that her sibling was not hurt and the mother comes back with. “How dare you tell me so?” retorted Mrs Pocket “go and sit down in your chair his moment.” This shows how she would not accept any suggestions from anyone it doesn’t matter how sensible and needed they were, for the safety of her own child.

In what way does Charles Dickens win the sympathy of his readers for the children in his novels?". (2020, Jun 02). Retrieved from https://studymoose.com/way-charles-dickens-win-sympathy-readers-children-novels-new-essay 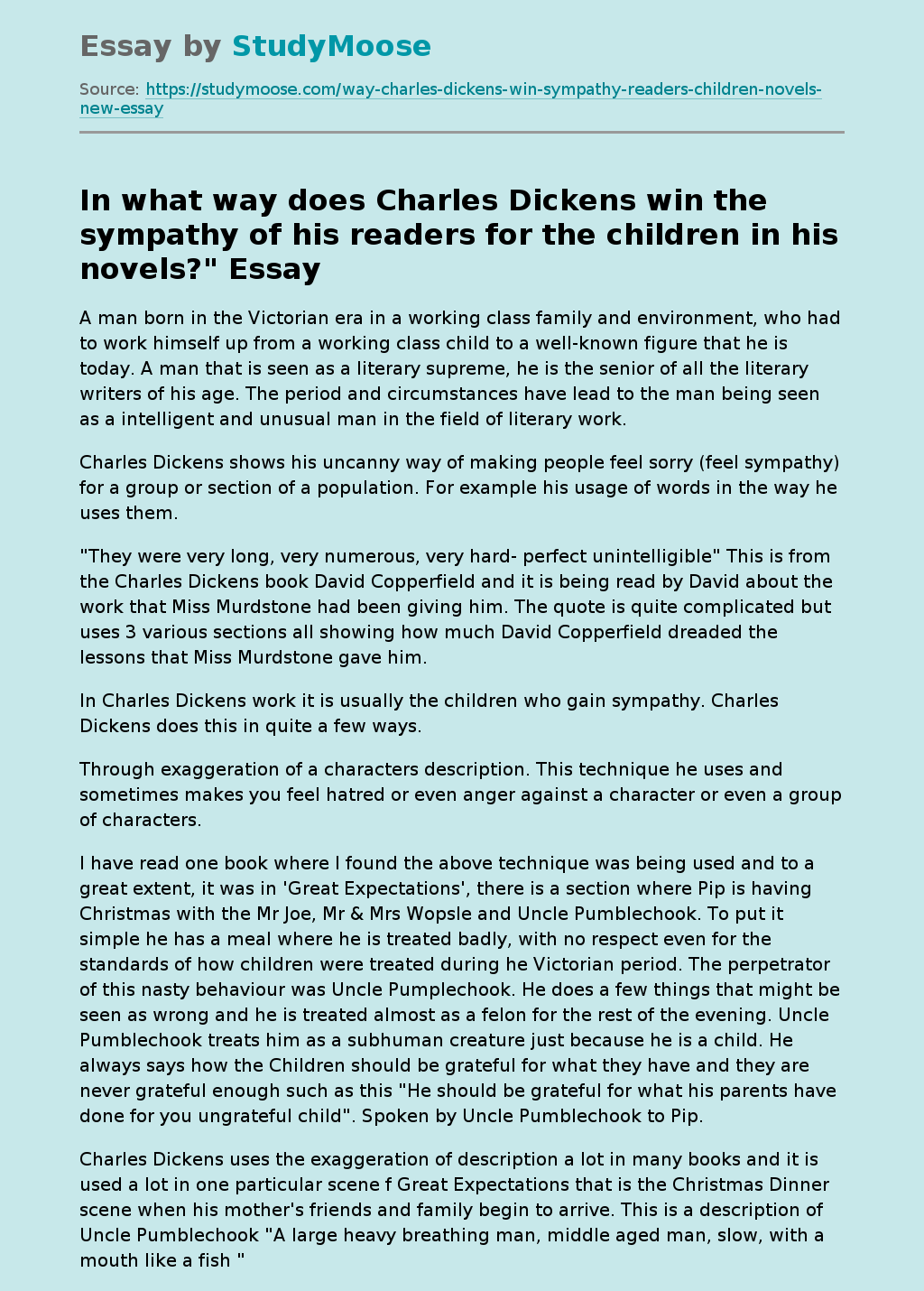