Water is one of the few essential elements for humans and any living organisms to survive, and although the world’s surface is 71% water, only 2.5% of it is freshwater. Since water pollution has been an issue for more than 100 years- it is much harder for us to fix this problem. Those simple things such as leaving your garbage on the beach and car pieces on the street are one of the biggest causes of water pollution. Another significant issue that has taken a vital part of water pollution is oil & chemical spillage, as well as the inadequate filtration systems when it is a huge necessity in the ocean.

Don't use plagiarized sources. Get your custom essay on
“ Water Pollution and Ocean Pollution ”
Get custom paper
NEW! smart matching with writer

Because of this, many marine aminals and people have perished due to the lack of environmental resources.

The majority of pollutants that go into the ocean are from activities that come from land. Nonpoint Source Pollution is the biggest problem of this because after it rains or snows, it moves everything that was in the ground and the water absorbs any pollutants that contact it.

‘NPS is widespread because it could occur at any time activities disturb the land or water, Agriculture, forestry, grazing, static systems, recreational boating, urban runoff, construction, physical changes to stream, channels, and habitat degradation are potential sources of NPS pollution’ (EPA- Pointer 1). The United States Environmental Protection Agency is telling us that nonpoint source pollution can happen at any time and affect both land & water and has further consequences that we can´t see now. The smallest piece of trash we throw outside our car window or even the broken wheel that we leave on the highway both contribute to the issue that we are currently dealing with, and eventually make it worse.

Not only is nonpoint source pollution a significant contribution to water pollution but also oil spillage and chemical pollutions in the ocean. Oils spills are very tough to get rid of since the oil tends to be dense and there can be huge quantities that can it take years getting rid of one of many oil spillages. Since these oil spillages can take years to fix it is affecting the lives of many marine animals and plants by suffocating them, blocking sunlight, and even development issues. ¨When exposed to oil, adult fish may experience reduced growth, enlarged livers, changes in heart and respiration rates, fin erosion and reproduction impairment. Oil also adversely affects eggs and larval survival¨ (National Ocean Services). Marine animals are the ones who are being most affected by the oil spillages because it is ruining their environments and even making some of these animals extinct. Besides oil spillage, there is also chemical pollution which is dangerous chemicals from industries, that usually comes in large amounts into the natural environment. These chemicals threaten the lives of many animals, as well as humans and, are very hard to break down. ¨PCBs can be lethal to animals (including humans) at higher concentrations and can cause non-lethal, yet still dangerous effects at lower concentrations¨ ¨Non-lethal effects of PCBs include the disruption of reproductive and immune systems. Studies of some people exposed to PCBs have associated PCB exposure with miscarriages, low fertility, and various childhood problems’ (WCD, Marine Chemical Pollution). No matter if the chemical concentration is high or low, they both have a high risk of danger on the organism of animals, especially to a wide range of marine animals since most of the food that they eat absorb the chemicals such as PCBs (PolyChlorinated Biphenyls). Both oil spills and chemical pollution is especially harmful to marine life and will have a high impact on us as well if we don´t stop this issue from getting worse.

Ultimately, the reason why we still have ocean pollution around is that we don´t have the right systems to help us eliminate water waste. Although it is 2018 and technology is advancing at a rapid pace, we still don’t have machines to get rid of oil spillages or trash that is in the water. Although we can help out on preventing water pollution by ‘conserving water’ & not throwing ‘litter into rivers, lakes or oceans…clean up any litter you see on beaches or in rivers and lakes’ (Water Pollution, Prevention of Water Pollution), it is not guaranteed everyone is going to do so. We need the government to help us solve this issue by creating systems to collect trash in the ocean because we could only do so much at the end of the day.

Water pollution is a serious issue going on right now and we have to make an effort to take of the Earth more and stop this from getting worse. Simple things such as leaving your garbage on the beach or throwing it on the floor simply because there wasn’t a garbage can nearby are the largest cause of this problem. Another significant issue that has taken a vital part of water pollution is oil & chemical spillage, as well as the inadequate filtration systems when it is a huge necessity in the ocean. Because of this, many marine aminals and people have perished due to the lack of environmental resources and now is the time to make a change. 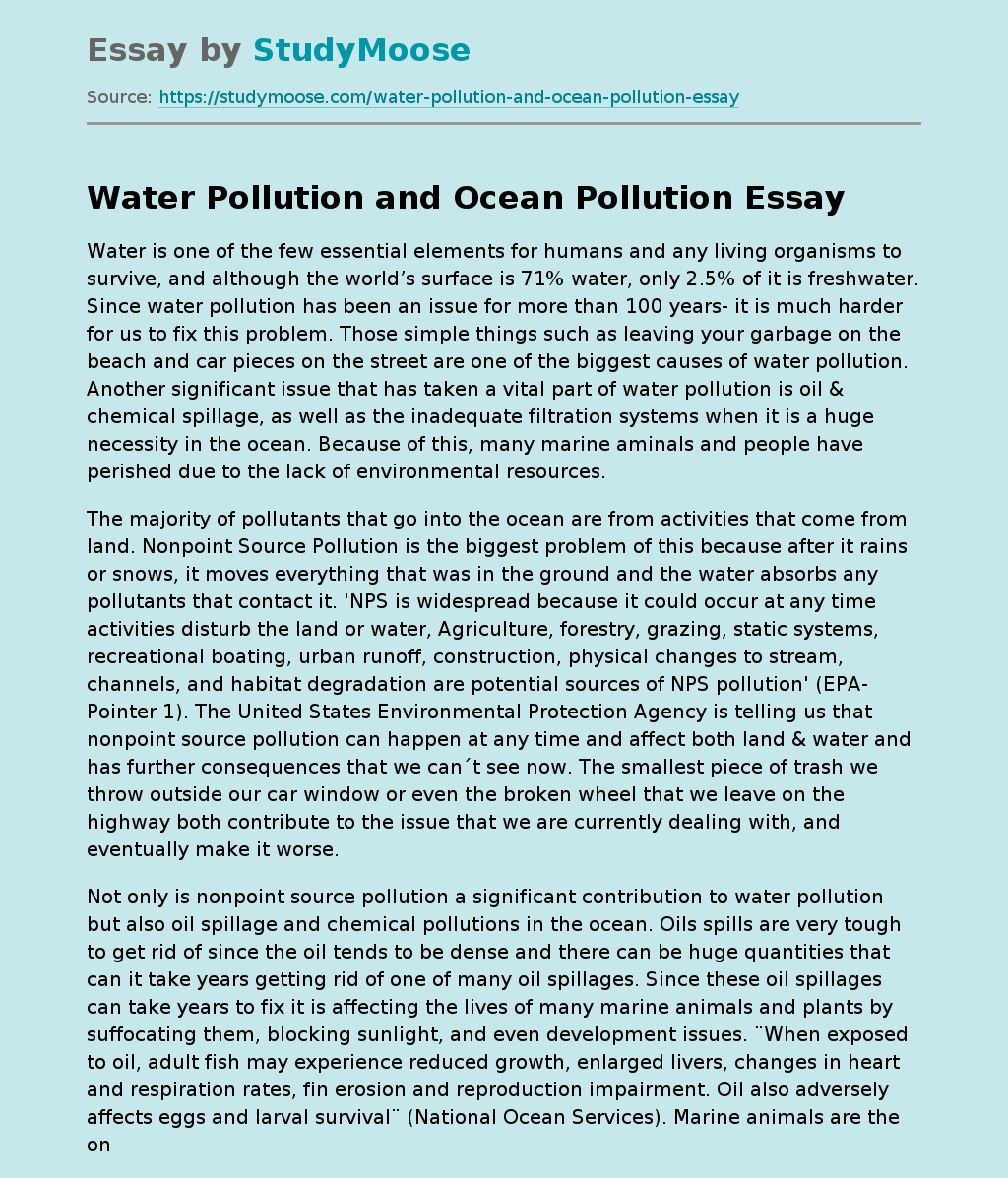