If my experiment were to be performed over a longer period of time, for instance 24 hours, I would add a fixed amount of Sodium hydrogen carbonate to the water, thus ensuring a large enough supply of carbon dioxide. Water availability – water is also required in the photosynthesis reaction, and when it is lacking, the plants’ stomata close to prevent further water loss. This closing of the stomata cells also leads to little carbon dioxide being able to diffuse through. Clearly, in a water plant, like the pondweed, as long as the plant is fully submerged in water at all times, this will not be a problem.

Don't use plagiarized sources. Get your custom essay on
“ Water availability ”
Get custom paper
NEW! smart matching with writer

Temperature – Enzymes are used in the photosynthesis reactions of a plant. Therefore, temperature will increase the rate of photosynthesis, until a point at which the enzymes denature. Although performing the experiment at a temperature slightly higher than room temperature, perhaps 25i?? C, would have a positive effect on the accuracy of the readings I took, as it would reduce the percentage error, by increasing the volumes, I decided that the inaccuracy of maintaining a constant temperature would outweigh any advantages.

I am therefore going to perform the experiment at room temperature, checking the temperature frequently, in case the heat given off from the light should slightly raise the temperature, in which case I shall simply refill the beaker with more water after each experiment. Method Apparatus list Desk lamp Audus apparatus Canadian pond weed Knife Clamp Pond water Thermometer Test-tube Beaker Cold water Stopwatch Cut a stem of Canadian pondweed of about 3cm in length.

Fill a test-tube with pond water, and place it in a clamp, and then in a large beaker of cold water. Connect the end of the pondweed to the Audus apparatus.

Insert a thermometer into the beaker, and record the temperature at the beginning and end of each experiment, merely as a precaution against a significant rise in temperature, which is not expected. Set up a lamp at a set distance from the plant, ensuring that this distance is from the filament of the lamp to the actual pondweed, rather than the edge of the beaker. The light intensity was measured in the same way as described in the preliminary experiment, and assumed to be the same at any point at any particular distance. When bubbles are being produced at a steady rate, clear any previous bubbles from the tubing by moving the syringe.

Start the stopwatch, and wait for 1 minute. Move the bubbles, which have been collected at the bend in the tubing to the part of the tube with a scale. Find the length of the bubble collected. Repeat for all other readings, and then repeat all readings a second time to get an average result for each distance. Audus apparatus Using the described method, I found the following results: Results for main experiment Distance Light intensity length 1 length 2 average length (cm) (lux) (mm) (mm) (mm) .

Although, because I was using light intensity as my variable, I did not need to record the distances as well, I did, simply to use them as a marker for each result, so that I only had to record the light intensity once at the beginning and from then I just had to align the lamp at the correct distance each time. Analysis My graph was in the form of a best-fit curve. I drew it as a curve rather than a straight line because of the clear pattern of the points. This meant that the rate of photosynthesis increased as the light intensity increased.

This is because a higher light intensity involves a greater level of light energy, which can then be transferred to a special protein environment designed to convert the energy. Here, the energy of a photon is used to transfer electrons from one chlorophyll pigment to the next. When enough energy has been gathered at a reaction centre, ATP can be synthesised from ADP. The oxygen collected in the experiment is in fact the by-product of this reaction, and so it is clear to see that the more light energy, the more ADP is being converted into ATP and more oxygen is produced as a result. 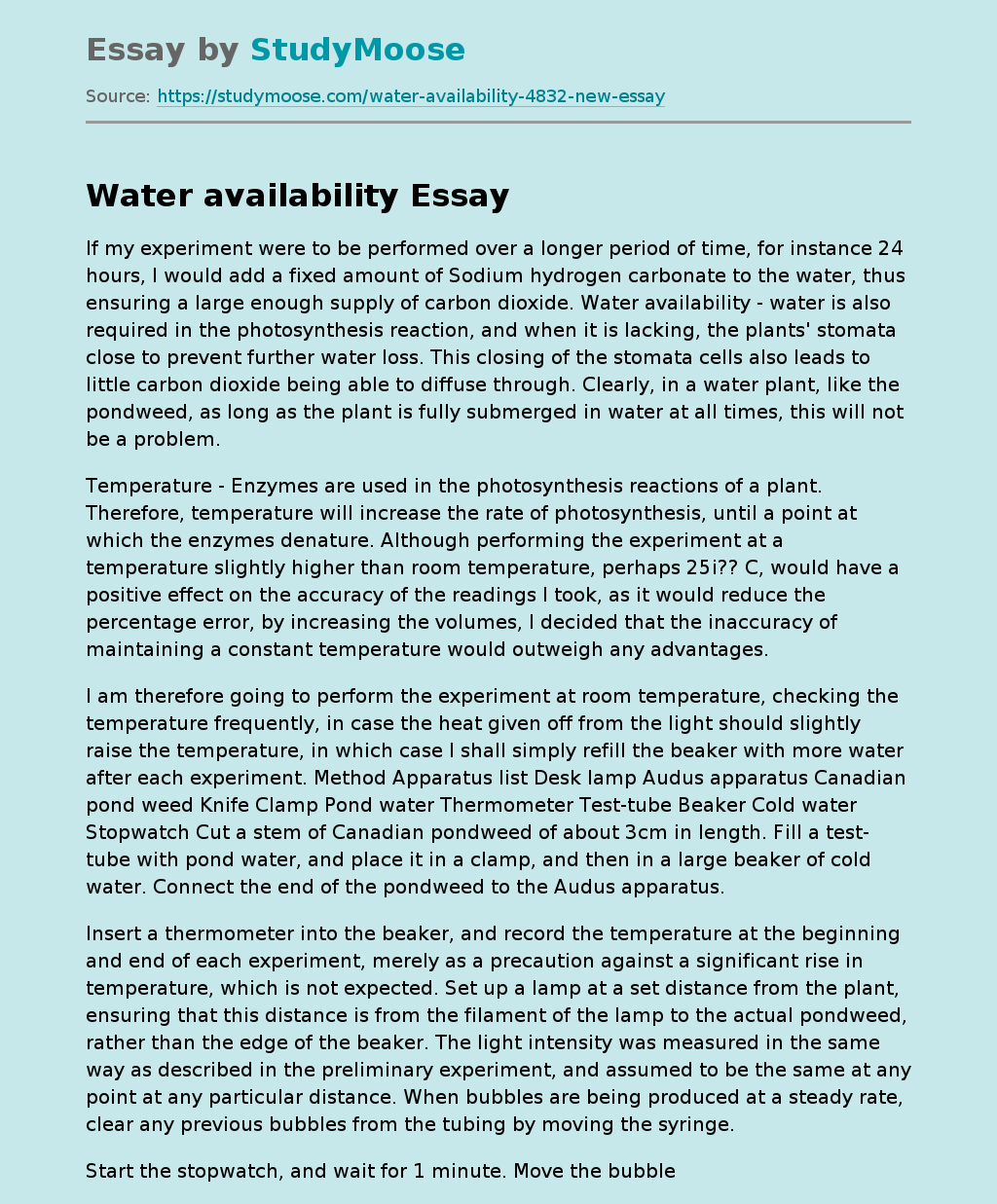