Water as a Frenemy in the Coromandel Fisher by Sarojini Naidu

Sarojini Naidu (13 February, 1879 – March 2, 1949) also known as “The Nightingale of India” was a child prodigy, Indian Independence activist and poet. Naidu was a source of inspiration for all the freedom fighters and was one of the framers of the Constitution. She was the first woman to become The President of Indian National Congress and it is her birthday that is celebrated as Women’s Day all over India. She began writing at the age of 12 and her collection of poems is named “Broken Exes” (1905).

Don't use plagiarized sources. Get your custom essay on
“ Water as a Frenemy in the Coromandel Fisher by Sarojini Naidu ”
Get custom paper
NEW! smart matching with writer

Some of her famous poems are Ecstasy, Indian Dancers, The Indian, In The Forest, Palanquin Bearers etc. Her poems were admired by many prominent Indian politicians. Her language is simple and provokes patriotic feelings. She has also portrayed the beauty of nature and its importance to one’s life through her poems.

Sarojini Naidu begins the poem, The Coromandel Fishers in a positive note of hope. She calls the fishermen as ‘Brothers’ and asks them to ‘rise’ as the wakening skies are praying to the morning sunlight that has just started illuminating the skies.

The wind that had blown hard all night has also become calm now and so she calls them to gather their nets, set their catamarans free and move to capture the wealth of the sea. This is their right, for they are the kings of the sea. Rise, brothers, rise; the wakening skies pray to the morning light, The wind lies asleep in the arms of the dawn like a child that has cried all .

night. Come, let us gather our nets from the shore and set our catamarans free, To capture the leaping wealth of the tide, for we are the kings of the sea!(1-4)

She also asks them not to delay and to follow the sea gull’s call for they know where the treasures (fishers) are. Here the poet creates a bond between the sea and the fishermen by stating that the sea is their Mother, the clouds their Brother and the waves their Comrades. And she also points out that, if there were any disturbing factors, (wind, storm, tide) then there is their Sea God who will drive away the terrors. “No longer delay, let us hasten away in the track of the sea gull’s call,/The sea is our mother, the cloud is our brother, the waves are our comrades all”(5-6). In the last stanza she portrays the beauty of the land and as the sun is setting she asks the fishermen to row their boats back to the land. “Row, brothers, row to the edge of the verge, where the low sky mates with the sea” (12) At the outset there is a picturesque view of nature and the life of the fishermen on the sea. It has been clearly stated that the sea is the only source of life to the fishermen and they consider it to be their ‘Mother’. The poet also states that, the wealth of the sea belongs to the fishermen who are the kings of the sea. The sea as a “Mother” loves her children and she pours her gifts without expecting anything in return.

The clouds and waves being their brothers and comrades help them move deeper and explore the love of their Mother – The Sea. The life on the shores of the sea is also a luxury for the fishermen, they love their land as well for there, they enjoy the shade of the coconut trees and the sweet fragrance of the mango trees. “Sweet is the shade of the cocoanut glade, and the scent of the mango grove” (9) But yet the waves and the foam of the sea is more enduring to them. Thus the water (Sea) becomes a part of them like a FRIEND (enemy) who is always beside them. Like a Mother, who corrects her children, so is the sea, to the fishermen with her wild nature of wind, storm and tides. All these mirror the other side of the mother and make it difficult for the fishermen to face her. Here she (sea) stands as a (Fr) ENEMY to the fishermen. But the poet puts forth that, this should not prevent the fishermen and that they must be courageous and brave. Although this may be the fact yet, the poet says that, there is the Sea God, who will protect them and save them all through the way. “What though we toss at the fall of the sun where the hand of the sea-god drives?” (7) And so they must not take themselves away from the sea but must create a deeper bond between them that will make them stay together throughout. Sarojini Naidu starts her poem on a hopeful note. As an inspiring writer during the period of India’s struggle for Independence, her major aim was to wake up the minds of the freedom fighters. She has put the fishermen in the place of soldiers and the sea to the battle field. There were number of reasons that made the common people – the followers of the movements (fishermen) to be reluctant to go into the battle field as they were afraid of the destructive forces (wind, storm, tide).
But she fills their minds with hope and asks them to capture their leaping wealth. By calling the enemies Brothers, Comrades and Mother, she highlights non-violence, India’s greatest weapon. In the end the poet reminds the fishermen not to be mesmerized by the temporary pleasures they enjoyed now and not to forget to fight for the real happiness of Free India.

The poem Coromendal Fishers has been woven with varied threads of, the beauty of the sea and the life of the fishermen. The water as in the form of sea in this poem has played a significant part. Its been called a Mother – who is the giver of life. The poet has given the best expression that can be, to show the bond and the importance of water to ones life. Even the sands on the shore are beautiful to them on a full moon day and they have become one with the water as they even know and love the calm and the gentle voice of the sea. “And sweet are the sands at the full o’ the moon with the sound of the voices we love” (10). The sea is their wealth and their life is based on the treasures of the sea. Even though their life on the sea is adventurous, they still prefer the dangers of the sea accept her as part of their family and portray her greatness to the world!

The role of water as Frenemy in this poem “The Coromandel Fishers” is an outstanding factor. Sarojini Naidu takes this as an essence of her poem to motivate the fishermen in a better way. At first, she clearly states the strength of their Enemy and the power of their wildness. The wildness is something that the fishermen must be ready to face as they are the disturbing factors of the sea. To this point there are many fishermen, who hesitate to go into the sea, which is their main source of life. The poet just does not stop here, but tries to sow the seeds of encouragement into the hearts of each fishermen whom she relates as Brothers. She calls them as the Kings of the sea and thus also makes them feel powerful. She also tries to throw more light on the positive feature of the sea as their Friend. As a Friend and a Mother the sea is also always ready to embrace the fishermen with her love and gifts. To add more depth to the positive aspect of the sea, Sarojini Naidu also states that the Sea God is also along with them on their journey into the sea, to help and guide them. Thus the poet Sarojini Naidu has made the poem a tool for encouragement and helped to
justify the title “Water as a Frenemy (Friend + Enemy) in the Coromandel Fishers”.

Water as a Frenemy in the Coromandel Fisher by Sarojini Naidu. (2016, Mar 28). Retrieved from https://studymoose.com/water-as-a-frenemy-in-the-coromandel-fisher-by-sarojini-naidu-essay 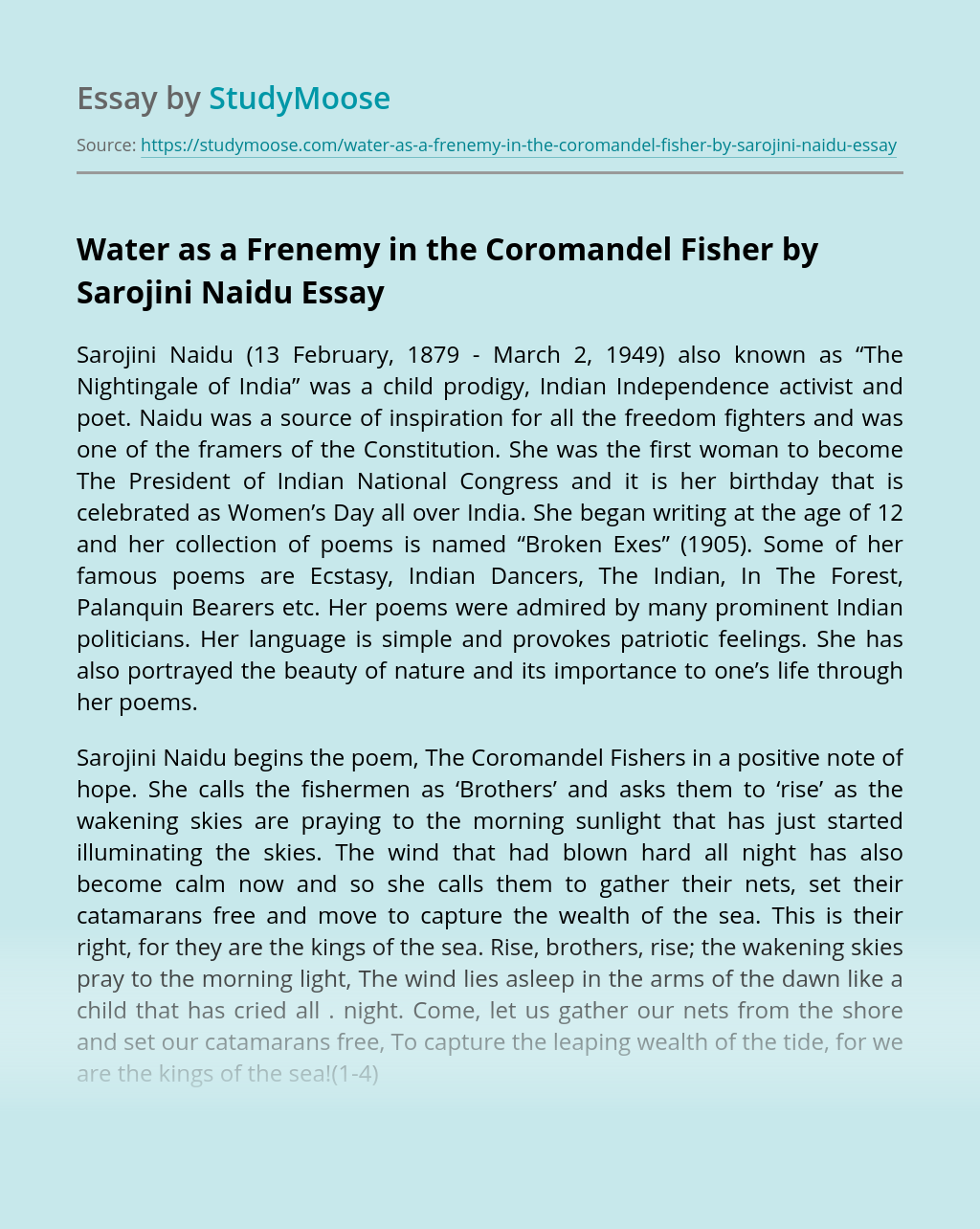