Shonda Rhimes “Sweet Baby” Scandal Episode first appeared on ABC in April 5 2012. In this episode she aims to convince her readers of the importance of self-reputation over individuality. Through the character of the newest client of Olivia Pope & Associates, 27-year-old decorated war hero, Sully St. James encounters the battle between what matters to him the most and how others portray him when he stumbles into the office of Olivia Pope distraught explaining that he didn’t kill his girlfriend. He claims to be innocent, but is in desperate need of help from Olivia Pope and Associate to clear his name from the strong evidence pointing towards him.

Don't use plagiarized sources. Get your custom essay on
“ Watching TV Makes You Smarter ”
Get custom paper
NEW! smart matching with writer

The Olivia Pope associates agree to take on the case under one condition-“do not lie.” The use of imagery, repetition, and contradictions are techniques Rhimes uses to create a strong, convincing TV Show.

Rhimes begins the TV show with the image of a desperate man covered in blood and crying to convey her overall message.

This acclaims to the fact that at first James is in need of his innocence proven right but later seeks a different route. This imagery strongly correlates to the use of pathos because it allows the reader to feel sorry for the man who had recently found his girlfriend dead but is at the same time afraid of being pointed as guilty for her murder. Secondly she presents us with the scene of him in his army uniform that depicts him as a man of honor that would only be “an idiot if he shot his girlfriend and then ran.

” This appeals to logos because credibility is given to the character of James as a serving man to his country. Imagery such as these are essential to the understanding of the writer’s points to come across.

It allows the reader to relate the outcomes of the TV show. Shortly after capturing the reader’s attention with the use of imagery she continues on to use repetition. One example she uses is when James consistently repeats, “She was my best friend.” Initially one just believes he really considered his partner to be his best friend. As the show continues and we find out that James is actually gay we realize how essential this phrase is to the whole purpose of the TV show. The hidden message in such phrase substantiates and supports the main idea of him legitimately considering her “only his best friend, not his lover”. “I am a hero,” is also used as repetition and this phrase shows what is truly important to James. Nothing is more important enough to damage his image as a hero. Not even his love for another man.

This also gives a sense of credibility to the character of James by repeatedly mentioning his accomplishment. Rhimes final transition includes going from repetition to the use of contradiction. She focuses on the idea of stereotypes and how a “war hero” cannot be “gay”. She places these phrases together in order to declare that in the perspective of James “gay is not okay”. Contradictions such as these lead Rhimes into making one of her strongest acclamations in the show, that reputation is shockingly much more important to James to the extent of choosing to be incarcerated. The comparison used appeals to logos since it combines two different concepts into one idea that is believed to be stereotypical. More important than each individual technique is the way Rhimes uses them together. It is evident that Rhimes strategically used such techniques in order to specifically create a TV show that expresses her ideas.

Watching TV Makes You Smarter. (2016, May 06). Retrieved from https://studymoose.com/watching-tv-makes-you-smarter-essay 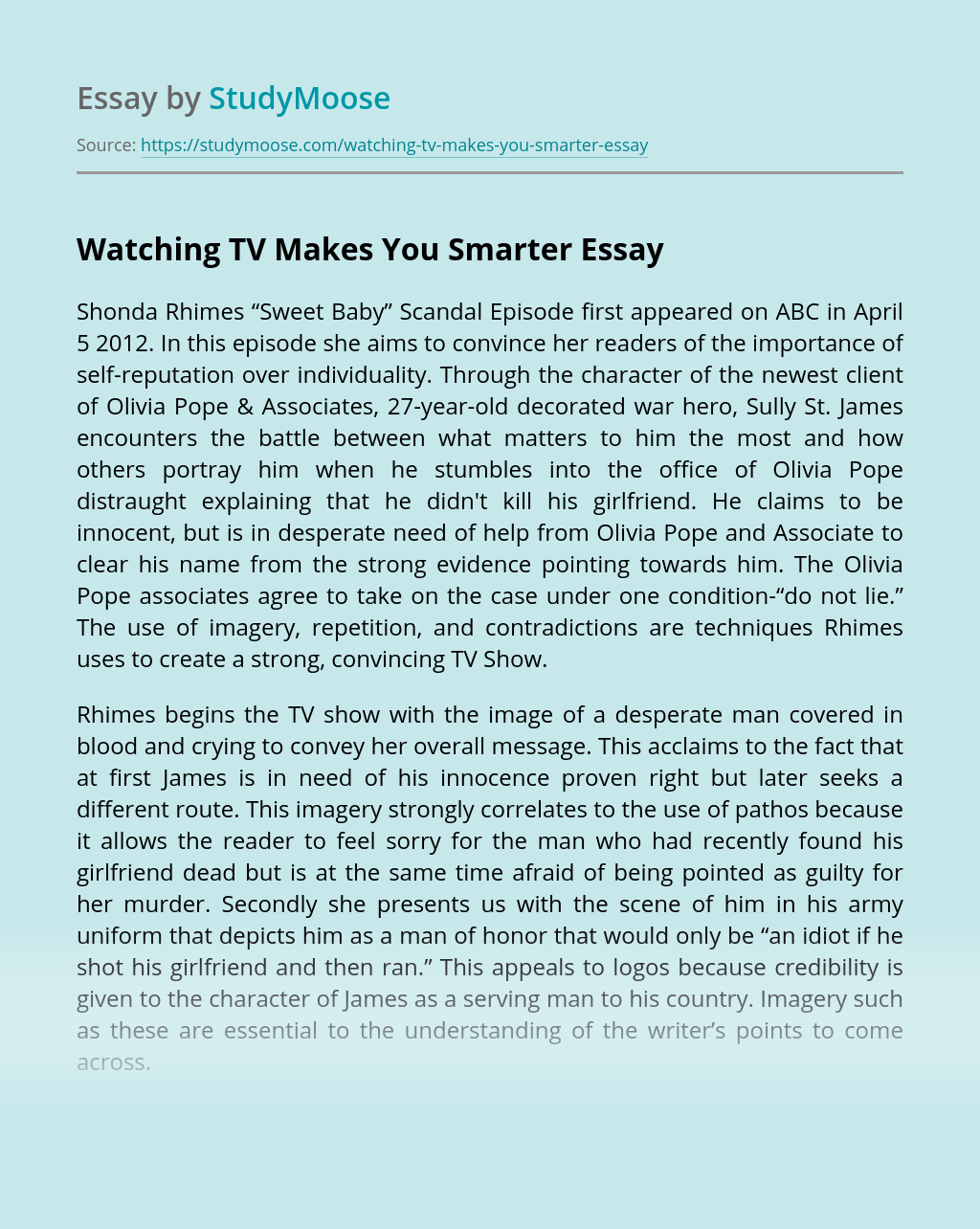