The 1905 Revolution was the build up of the dissatisfaction of Russia’s people with the government. Tsar Nicholas II had turned to key individuals such as Peter Stolypin to save the Tsarist regime. Stolypin, Russian Prime Minister from 1906 – 1911, had addressed a number of problems which threatened Tsarism by appeasing opposition and therefore putting down revolutionary attitudes. His reforms certainly did help gain back some of the Tsar’s supporters, however due to his assassination in 1911, it is hard to determine whether his reforms would have saved Tsarism.

Don't use plagiarized sources. Get your custom essay on
“ Was Peter Stolypin the Tsar’s last hope? ”
Get custom paper
NEW! smart matching with writer

After the 1905 Revolution, Stolypin had to deal with unsettled extremists such as the Socialist Revolutionary Combat Organisation who were a terrorist group. The authorities were greatly threatened and so Stolypin advised the Tsar to create a reserve cabinet. Reactionaries urged a full-scale dictatorship. Additionally, as a result of the first Duma being dissolved, 200 Kadet and Labourist deputies in Vyborg drew up an appeal urging the Russian people to defy the government. Instead of passive obedience, violence was used.

Order was restored by suppressing the opposition. Under article 87 of the fundamental laws, field courts-martial were introduced to deal with terrorists and the Martial Law was proclaimed. Trials were discarded and defendants were not allowed legal representation or the right to appeal; many executions were carried out. There were over 2500 executions and the hangman’s noose was nicknamed “Stolypin’s necktie.” These tactics were used to appease the Tsar and reduce terrorist activities that had threatened Tsarism.

Unlike Sergei Witte before him, Stolypin understood the importance of the peasantry; they had made up 80% of the Russian population.

Russia had undergone a “rural crisis” in the late nineteenth century and had deepened due to bad harvests in the 1890’s. Their ways of farming were very inefficient as they relied on the method of strip farming. After the emancipation of the serfs in 1861, the communal system was implemented and the peasants had to pay redemption payments which peasants couldn’t pay. The price of land was rising due to its increasing scarcity. Part of the reason the peasants revolted was because they were afraid the government was going to seize the land that they had failed to pay. Stolypin liberated the peasants by allowing them to leave the commune to work on their own and cancel outstanding payments.

Farmers were encouraged to replace their scattered strips with enclosed farms and as a result, yields were higher. Stolypin also wanted to create a society of landowning peasants who had motivation to invest, expand and increase efficiency. A Land Bank was set up to help the independent peasants to buy their allotments however many had to purchase them in scattered strips and the process of enclosure was extremely slow. This was method known as “wagering the strong.” Stolypin believed the prosperous, productive peasants would turn into supporters of the Tsar due to their new wealth. His agricultural reforms were a way of “de- revolutionising” the peasants to save Tsarism as other authorities had ignored their needs.

Stolypin had worked very closely with the Duma rather than oppose it. The First Duma was dissolved before Stolypin became Prime Minister. The second Duma was dominated by left-wing deputies; some were in the Duma to cause and disruption and carry on revolutionary ideas. Right-wing parties wanted to abolish the Duma altogether. Dictatorship could have been introduced; however, the Duma was used as a cause of Russia’s problems and also increased Russia’s chances of securing loans from Western Europe as they were impressed by what seemed to be a democratic nation. The second Duma was eventually dissolved in June 1907. The third Duma was dominated by right-wing parties and criticisms of the Tsarist regime were much less vocalised. They were also much more co-operative with Stolypin and this enabled him to carry out his land reforms. Because of this, Stolypin was able to satisfy the needs of the people, thus creating support for the Tsar.

However, his suppression tactics, land reforms and relations with the Duma were not fully successful. The largest party in the first Duma, the Kadets, condemned Stolypin’s policy of repression and this led to discontent. Since the Russian peasantry had been so backwards, there was little time for change. It was because of the peasants’ conservatism that prevented them from progressive change; they were reluctant to leave the commune for individual farming and even the Miniter of Agriculture had begun to lose confidence in Stolypin’s reforms. Also, the first two Dumas were dominated by more radical parties that demanded further reform. Stolypin could not works successfully with the first two Duma’s and so changed the voting arrangements so the Duma could work to his favour. Nationalities did not have a good relationship with Stolypin and had little or no representation in the third and fourth Duma. This caused resentment to the Tsar.

Tsar Nicholas II had become suspicious with Stolypin’s reforms and the power he had over the Duma. He felt that Stolypin was trying to overthrow him. In 1909, Stolypin wanted to introduce a naval budget which was approved by the Duma, but not by the Tsar’s as he feared this would diminish his powers. What cause Stolypin’s downfall was his proposal to introduce zemstva to the western provinces. This passed the Duma but, his right-wing opponent’s saw a chance to weaken him. They helped to stop the zemstva measure in early March. Stolypin demanded that the bill be imposed under article 87 and that his opposition be expelled from St. Petersburg. The Tsar gave in to these demands. Stolypin’s misuse of article 87 angered constitutionalists and he lost trust from the Tsar himself.

To conclude, the land reforms did increase yield and therefore profits and his repressive tactics did decrease opposition to Tsardom. His relations with the Duma also made it easier for him to pass these reforms. Nevertheless, his manipulation of article 87 to alter the electoral law and introduce zemstva to the western provinces was condemned by constitutionalists and the field courts angered Russian liberals. His land policies seemed rather improbable due to the conservatism of the peasants. He had helped gained support from the Tsar but soon lost trust. The Tsar also had other individual such as Sergei Witte to help transform Russia. 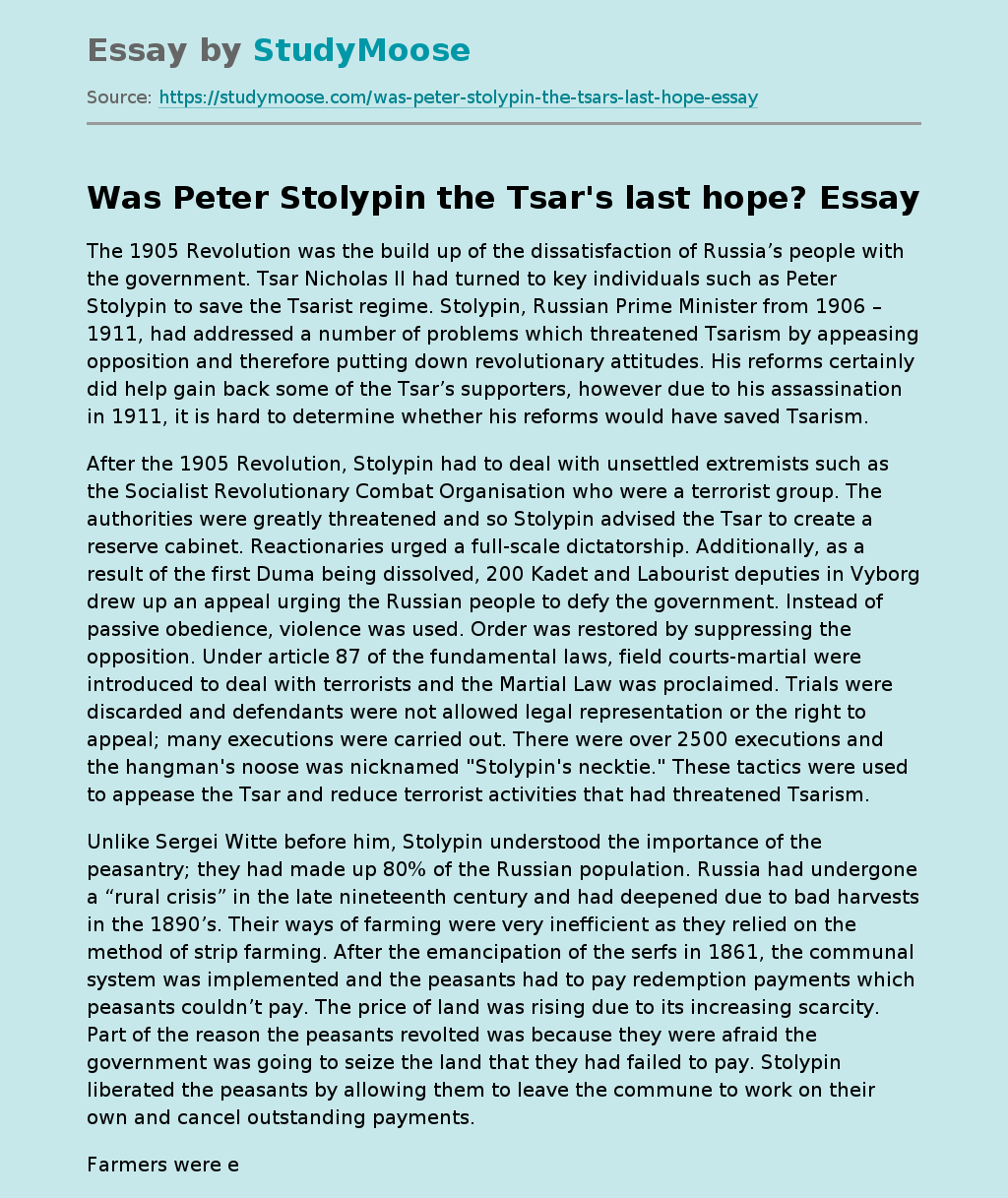