Was Napoleon a Liberator or a Conqueror

Throughout Napoleon’s rule many questions had risen pondering about Napoleons actions and his state of mind. One of those was if whether Napoleon was a liberator or a conqueror. Truth is that Napoleon was a conqueror. The only thing that Napoleon was focused on was his main goal; to conqueror and control all of Europe. That in which Napoleon had made himself clear that nothing could ever get in the way of him having complete and absolute power. Since Napoleon was much shorter than others; he felt that he had to accomplish a lot to be placed above everyone else.

Don't use plagiarized sources. Get your custom essay on
“ Was Napoleon a Liberator or a Conqueror ”
Get custom paper
NEW! smart matching with writer

Napoleon would always indeed chose the other side which had more power than the other; not caring which side was his true, honest opinion. As he once had mentioned: “Since one must take sides, one might as well choose the side that is victorious, the side which devastates loots and burns. This shows that Napoleon had no true devotion to politics and never took notice of what was just or not; all he cared about was power.

Upon hearing this some may bring up the subject that Napoleon was indeed Pro-revolution; and he conquered lands so he could spread it to other countries as well. The only reason why Napoleon was in fact “Pro-revolution” was because his own country favored it and he realized that without the support of his people he had no chance of coming to power. Take for example the Napoleonic Code, Even thou half of the French revolution stood for woman finally gaining equal rights; in the code Napoleon took away many of those new rights away women.

This just proves that Napoleon was in fact not pro-revolution at all; instead he was much more into imperialism which is what lead him to conquer other lands.

For instance, when Napoleon told Italy to revolt against their ruler; he had told them of new rights, and as well as a constitution. For a moment you would have thought that Napoleon truly wanted to free the people of Italy from their ruler. Instead from the moment Napoleon came to power he ruled over Italy just like any other monarch; pointing out how all he cared for was land. The people of Italy took quick action and rebelled against Napoleon.

If Napoleon was truly a liberator, he would have spread much of the French Revolution and freedom upon his conquered lands. Instead Napoleon used his lands for economic purses; such as strengthening his army. Also Napoleon used “forceful diplomacy upon much of Europe; controlling who ruled and exactly how they ruled. Napoleon placed his friends and relatives in control of many countries; he also forced “Alliances on Europeans” forcing rulers of Austria, Prussia, and Russia to sign treaties. At this point people and monarchies alike began calling Napoleon the “Corsican Ogre”. At this point Napoleon had no care about passing down freedom or revolutions; he instead took actions that he saw would befit him.

Napoleon was a European tyrant that came so close to conquering all of Europe. He was a military genius that was thirsty for more power; and never cared for his people or any sort of justice. All of his focus went on gaining lands, money and power; for that was the only thing that made him happy. Never was it heard of Napoleon complaining of some sort of injustice going on in Russia or Britain; or Napoleon spreading the French Revolution on to other countries. Napoleon was not a liberator; but instead a conqueror.

Was Napoleon a Liberator or a Conqueror. (2016, Jul 31). Retrieved from https://studymoose.com/was-napoleon-a-liberator-or-a-conqueror-essay 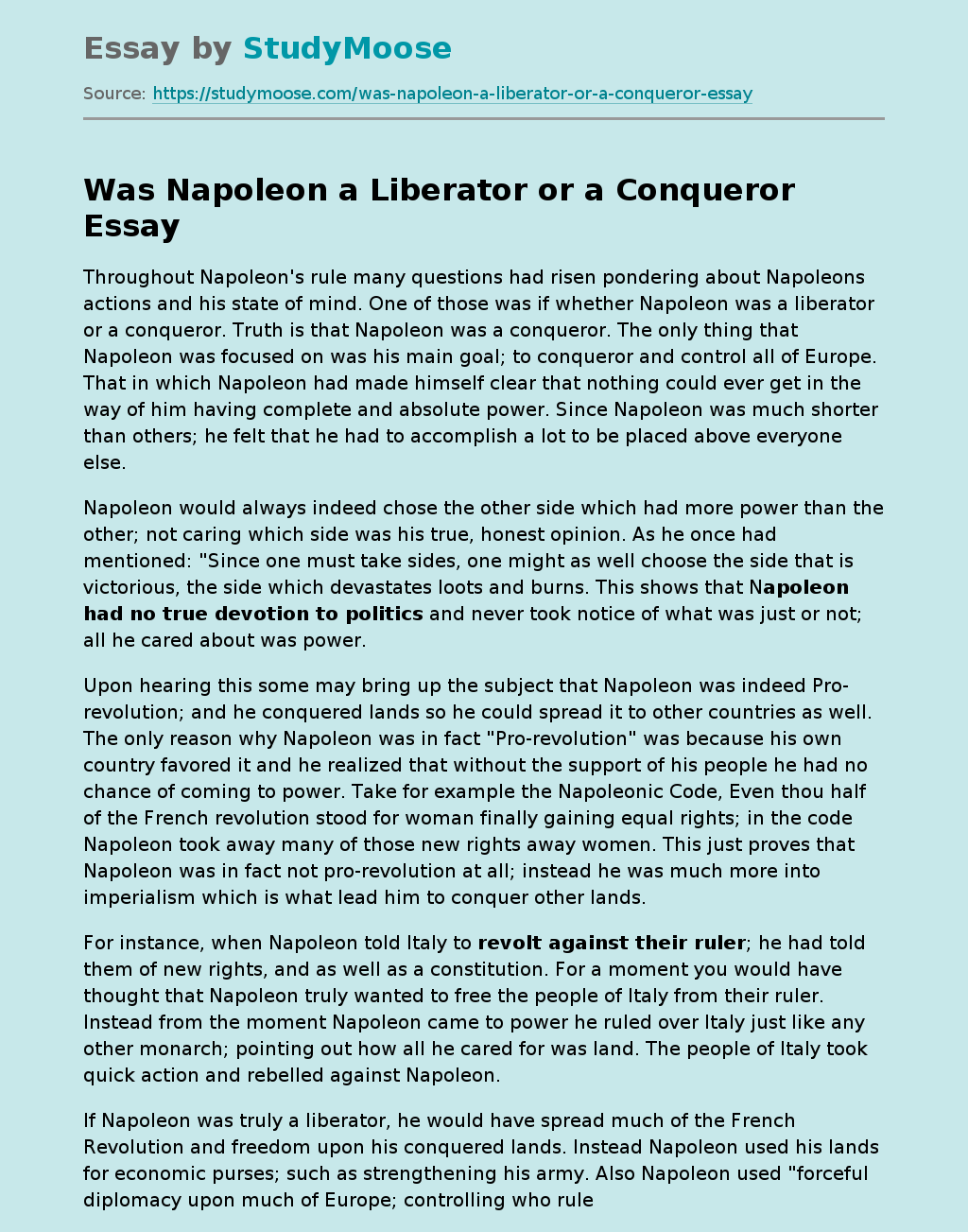