Was King Louis XVI Partially Responsible For His Own Downfall

Awkward and timid, no man appeared less like a king than Louis XVI, he was merly 20 years old when he succeeded his grandfather Louis XV and came in to the throne. No one could have seemed more out of place than he did. Louis himself realised this and often wished, even before the revolution, that he were a common man. Although he made an earnest effort to reform the government at the time, when his predecessor had so far exhausted the people’s good will for trust in the monarchy.

Don't use plagiarized sources. Get your custom essay on
“ Was King Louis XVI Partially Responsible For His Own Downfall ”
Get custom paper
NEW! smart matching with writer

His greatest fault was that he was easily influenced. He was always ready to listen to others and take their advice. When the advice was good, everything was fine, but later in Louis XVI’s reign the advice was bad and a culmination of mistakes cost the king his life.

Upon his accesion to the throne the government was deeply in debt and the tax system a shambles. He re-established the parlament of Paris, which had not met for many years.

Tradition was that a decree of the king did not take effect until it had been registered by the parlament of Paris. One History I have cosulted delairs that Parlament swere bastions of reactionism, supporters of arristocracy, and that Louis’s re-establishment of them shows him to have been an enemy of progress and of the people.

Another says that the people greatly desired the recall of the parlaments, and by doing so Louis showed himself to be a friend of progress and of the people.

Although his early attempts to enact reforms and to appoint competent and upright ministers met with general approval, his character was unsuited to provide the leadership needed to controll the complex social and political conflict smoldering in France. So his able ministers A.R.J Turgot and Chretien de Malesherbes began the reforms, but the court opposed them and as a result Turgot was dismissed and Malesherbes resigned. Jaques Necker was then appointed director of the treasury.

The king supported most of Neckers Reforms, but France’s intervention in the American Revolution was a very costly affair, primarily motivated by their revenge for the British, it more than cancelled their savings and as well as Necker borrowing large sums of money it greatly swelt the debt. Neckers attempt to gain greater controll over policy was rebuffed by the court and he later resigned. Charles Alexandre de Calonne and Charles Lomenie de Brienne then replaced him. After borrowing money from the court for 3 years, until the borrowing limit was reached, they concluded that they had no sollution and were unable to ward off the bankruptcy. A further tax reform was sought, and the king convoked the Assembly of Notables and asked their concent to tax the privaledged classes. The notables made a few minor reforms but refused to consent to taxation, referring this to the states general.

The French people, angered by the taxes and the excesive spending of the court then recalled Necker, who however could not prevent the bankruptcy of the government. With no other choice, in 1788 King Louis was forced to call a meeting of the Estates General in order to have the monetary forms approved. This decision was one of the events that transformed the general malaise into the French Revolution.

With Necker Restored, he prevailed upon the King to double the number of deputies from the third, or popular estate. However, this increase would be meaningless if the estates met seperately and voted as units rather than individuals; the nobles (first estate), and the clergy (second estate), could still outvote the third estate. But if the vote were by heads, the commoners would vote almost unanimously for any measure that was clearly in the intrest of the people, and pick up enough votes from well meaning clergy and nobles to have a majority. The king’s opposition to the combined meeting of the estates and his procrastination on this issue led the third estate to proclaim itself a National Assembly. Thus signaling the end of absolutism in France. Louis ordered the estates to meet and vote separately, but he was forced to allow the estates to sit together and vote by head.

Shortly afterward Louis sent troups into Paris, where he suspected that the French Guards were being too sympathetic to theassembly. Rumours then circulated that the king intended to supress the assembly, and the dismissal of the popular Necker provoked the storming of the Bastille. Louis again had to capulate, he ordered the withdrawal of the royal troups, reinstated Necker, and accepted the new national red, white and blue cockade.

It seems clear that the national assembly had no initial intention of attacking the Church. However several factors such as the presence in Paris of a strong anti-clerical press and anti-clerical theatre led the delegated to believe that the church was unpopular with the people and that any measures that they took to reform the church would lead to popular approval. So they passed an act know as the Civil Constitution of the Clergy. It stated that all cleracal sallaries should ba paid out of the tax fund and that evey taxpayer should be eligible to vote regaurdless of religion. They passed the measure withour consulting the clergy and then passed a second measure requiringall the clergy to take an oath to support the new arrangements

Assembly. He landed up signing in in December 1790. 96% of the Bishpos present refused to sign the oath, as did two thirds of the lower clergy. A mob susequently formed and there were many riots and violence against Priests and Nuns.

Louis’s confessor had taken the oath, and by now Louis was convinced that he had sinned by signing the bill.

He was forced to turn to a new confessor who had not taken the oath (a non-juror). After putting off his Easter communion till the last possible date, Louis received it from a non-juror, he saled his fate and he knew it!

Regardless of what one thinks of his taxing policies (fiscal), it is clear that by making his Easter communion he did what he believed was his Christian duty, knowing that it would probably cost him his life. He is therefor reckond a Martyr.

Louis then attempted to flee secretly from France to Germany with his Family, but on the way they were recognised and captured by the revolutionaries. He was returned to Paris where he was arrested, tries and convicted for treason befor the National Assembly. He was sentenced to death by guillotine and was beheaded in front of a cheering crowd on 21 January 1793, at the age of 39.

His wife Marie Antoinette was also beheaded later that year in October.

Throughout his life Louis himself was very unpopular and not unobliging to the social, political and economic reforms of the revolution, but the bad influences of his wife in politics caused him to reject the the principles of the revolution. This caused his popularity to drop and the mistrust against him grew, thus undermining his possition as a monarch. Other people who had bad influences on him were his brothers the comte d’ Artois and the comte de Provence. King Louis abolished torture and the death penalty, he abolished the corvee, or land tax, he was a noble and corageous G-d fearing man who was sadly corrupted and influenced by other people because he was not strong enough to put his foot down and lay down the laws, even though he was the king.

Was King Louis XVI Partially Responsible For His Own Downfall. (2016, Jul 03). Retrieved from https://studymoose.com/was-king-louis-xvi-partially-responsible-for-his-own-downfall-essay 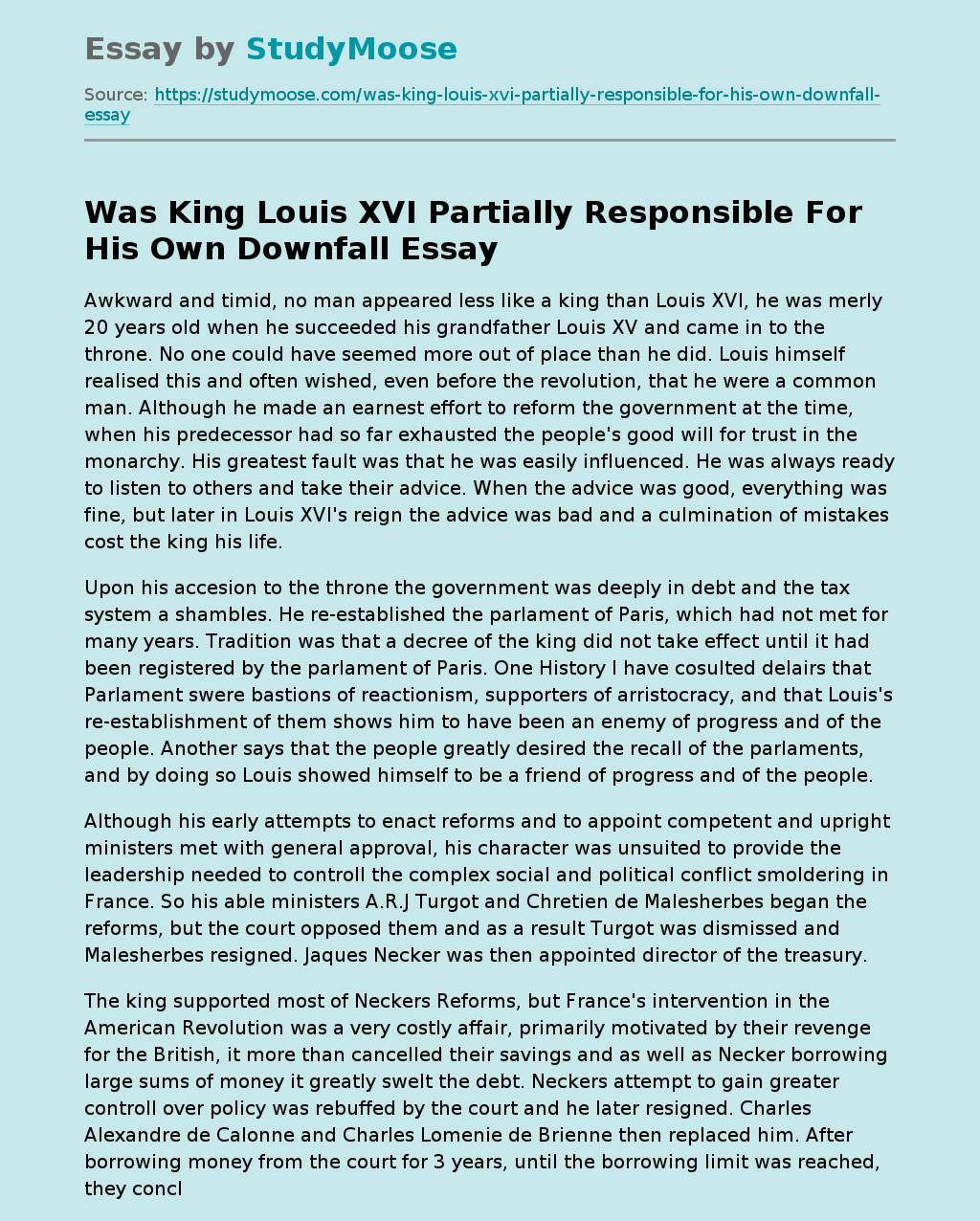