Was Hitler Really To Blame For WW2?

Some people say that Hitler was to blame for the 2nd world war, but what did Hitler actually do to cause it? We know that Hitler hated the Treaty of Versailles. But was Hitler’s feelings against the treaty the reason why the World War started. Germany received the treat when they signed the armistice to say they were guilty to blame for the first world war. This then lead to the treaty.

The treaty limited Germany’s army size. This was to try to and dis-encourage Germany to start another war, because they’d have the smallest army because the other countries have no restrictions on their army numbers.

Don't use plagiarized sources. Get your custom essay on
“ Was Hitler Really To Blame For WW2? ”
Get custom paper
NEW! smart matching with writer

Germany was also in a lot of debt because they were made to pay for the damage they’d caused. This then lead to job shortage in Germany, because employers couldn’t fund to pay people to work for them.

Even though countries fought against Germany and at first believed that the treaty was the right, fair punishment for what they’d done.

But after the treaty had been made and was in progress countries felt sympathetic towards Germany, because the treaty was too harsh on them.

Then Germany tried to prevent the treaty from being carried on. Hitler was very powerful during this, and a lot of Germans supported Hitler because they believed he was powerful enough to stop the treaty.

It was clear that Germany wanted the treaty to be destroyed, it was causing them pain in everyday life, preventing them from being satisfied or happy.

Therefore anybody who was brave enough to say that they could or try to stop the treaty would gain instant support from all of Germany.

This made it very easy for Hitler to take over Germany, because people would vote for him rather than the other two men that were in charge. The other two men in charge of Germany was very weak and often got ruled over a lot, Hitler did this very much. On a few occasions, when the leaders of Germany had meetings Hitler’s Nazi party had the most seats. They often stood up and walked out of meetings if they didn’t agree with the decisions what were being made. When the Nazi party walked out, this made the 2 men who were meant to be more powerful than Hitler, were being controlled by Hitler’s Nazi party.

Because Hitler was a very aggressive, controlling and persuasive person he got his own way on a lot occasions. For example Hitler only got made 3rd most powerful man in the country because they thought that if Germany did this they would be able to control him. We all know that they were wrong, it would take a lot to control Hitler.

The League of Nations was a group set up by America. The aim of this was to try and unite the countries, so there would be world peace. Wilson was the man who created this idea and made it come to live. Unfortunately Wilson was ill in hospital while the League was being set up. Other countries took control of the group and made it so Germany were not allowed to join the group.

This made the idea pointless, and defeated the objective of the whole idea. Just to recap why Wilson created the League, for world peace so Germany would not start war again.

Germany would want to start a war again the League now, because they’ve been left out and have no say in what goes on. Wilson disagreed with the decision the other countries made about banning Germany from the League.

Considering that Germany were able to be in the Second World War, they must have had a big enough army. This is impossible if the treaty was still in place, but we know that Germany destroyed this.

The countries against Germany like Britain, were still feeling sorry for Germany. This gave the Germans a chance to re-build their army, and become strong. Then Germany were ready to start war against Britain and France.

In my opinion I believe Hitler was to blame for the Second World War. Although I think that The Treaty of Versailles was unfair and too harsh on Germany, Hitler and Germany shouldn’t have reacted the way they did. There were a lot other options that Germany could have took to solve the problem.

France and Britain should have really stopped Hitler and stood up to Hitler. But I don’t blame them for not trying to stop Hitler because then that would have caused another world war anyway. Who knows that might have been a bad move, and caused more trouble than the war that Hitler created.

Was Hitler Really To Blame For WW2?. (2016, Oct 10). Retrieved from https://studymoose.com/was-hitler-really-to-blame-for-ww2-essay 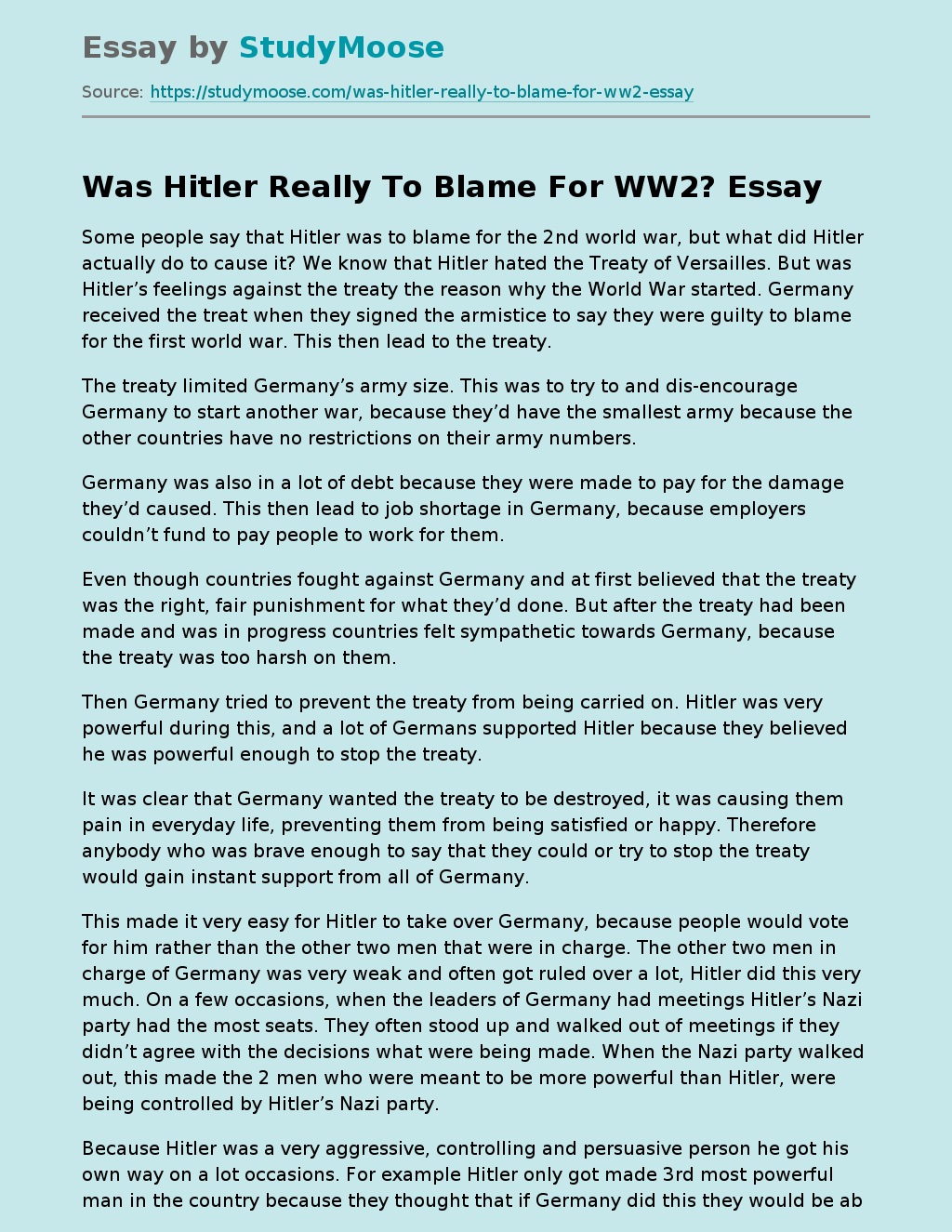