In Both the War Photographer and Stealing By Carol Anne Duffy the occupations of the narrator play a leading role even the titles are names of the occupations they both partake in. This is interesting because it seems that their jobs are their life and feeling even so they both share an extent of guiltiness related to their occupations, In War photographer he is guilty that he is at home in comfortable quiet rural England and all the people he photographs are still suffering.

But in Stealing the guilt is underlying, less obvious and more of a guilt to himself like he owes himself a life without stealing or boredom. This shows a degree of selfishness which is evident when he takes pleasure in knowing the the children will cry in the morning he then goes on to say lifes tough like he had to harden to the world at a young age and so should they, he shows a bitterness towards the children as they have a childhood and he didn’t and this bitterness seems to be aimed at all outsiders in both the poems .

” The readers eyeballs prick with tears between the bath and pre lunch beers.”

Because the people see the suffering and carry on with their on lives the narrator thinks the readers don’t care so their portrayed as heartless and cold.

Carol Anne Duffy seems to have a flair for writing poems from other peoples point of view this is most evident in Stealing were she tries to understand the narrators motive and attempts to make the reader sympathise and justify what he does when normally he would be portrayed as ‘ the bad guy ‘.

The snowman is a metaphor for what he has had in his life he steals it then dustructs it like he is destructing himself. The stealing is a ploy for attention he wants to be caught or noticed as he would have a reason to have contact with people eventhough he insults the people or outsiders in the poem ‘

to nowhere, break into houses just to have a look.”

This line defeats what he has said before when he developed the films the feelings the images conjured up made him remember the suffering he encountered but that was soon forgotten on the way to his next job he is turning in to what he condemns.

The use of the word ”they” signifies his view of society, the people that read newspapers he puts them all in the same cattergory and labels them accordingly.

The war photographer is set in four regular stanzas which emphasises the pattern of the war photographers day. The poem opens with the Photographer coming home from his job and ends with him flying out to another job this implies his life runs in a cycle. It is also written in present tense which make the events more realistic and shocking to the reader.

Stealing is also in equal stanzas this time five . And ocaisionly the end of one line falls into another (enjambment) which help the reader to enact the incidents which occur.

A sense of mystery surrounds the narrator in stealing you don’t know if he is male or female or his age and background although many assume the narrator is a man due to stereotypical criminal gender.In War Photographer we are told the narrator is male this is the only information surrounding the narrator intrestingly there is no desriptions of the physical attributes of the narrators or outsiders which poems usually include to help the reader relate to the charactors within the poems.

”spools of suffering set out in ordered rows”

conjures images of body bags holding victims of war laying side by side.

”The only light is red”

the colour red is used to remind the reader of the blood shed during war. These metophores seem to be effective by shocking the reader I think Carol Anne Duffy has intended the reader to start to think of the effects of the war not only on the victims but on the people who work their such as the War photographer, newsreaders or charity workers who aren’t necessarilly thought of being affected by war.

In stealing the thiefs motive seems to be lonliness and this is explored subtbly but although theres only traces of lonliness it seems to be the main theme in both the poems. Although they resent outsiders it is only because they wish they could be like the outsiders as their not doing a job which issolates them from society this jelousy also seems to be one of the themes which explain how and why the outsiders are portrayed.

I can’t decide if I like these poems or not I don’t really feel anything for the characters Carol Anne Duffy hasn’t made them likeable by not describing them and showing the bad traits of their personality which makes the poems seem gritty. There is many hidden messages which seem obvious but effective but the fact that I had to read them both five times before they made sense put me off right away.But maybe thats because im ‘ The cat in the hat’ rhyming poem kind of a girl ! 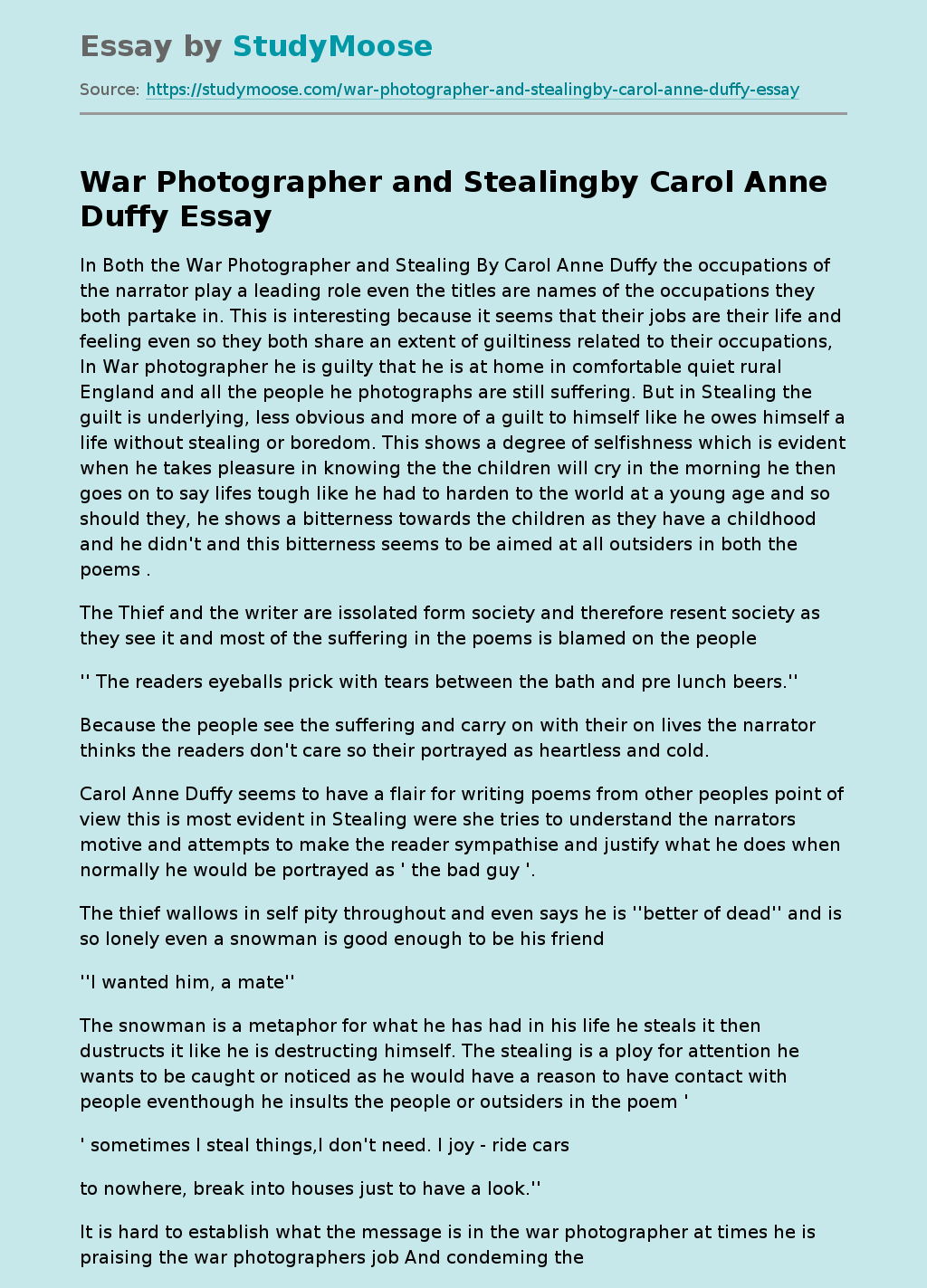