In the poem War Photograph, Kate Daniels immediately expects us to know which photograph she is talking about as soon as she gets past the first verse (which describes the photo in question) which explains why it is so short. The first stanza is describing what we see, immediately in front of us from this photo.

After this, she explains in the second stanza about the rest of the war; what we can’t see from the photo. After reading it you see that what you can see in the photo is like looking through a keyhole into a room.

You only see a small part of what is going on, but you get a better idea of whats going on after reading this poem. Showing us that in the picture we see only what they want us to see.

The idea that she is also “running from the gods who have changed the sky to fire and puddled the earth with skin and blood” makes us think how she is and they are running from the ‘All-powerful’ Americans – not gods – and that shows just how helpless those people are.

Or they could be referring to the elemental gods.

Daniels talks about how the war is being fought in the “Other World” which makes it sound like they are talking as though it has nothing to do with the Americans as it is so far away, but Daniels could also be referring to being communist.

“She keeps on running, you know, after the shutter if the camera clicks.

” The extra “you know” sounds almost dismissive, saying is in a matter-of-fact way. “She is running to us… for how can she know what we really are? From a distance we look so terribly human.” This explains how the Americans are to blame and how the Vietnamese didn’t know.

In the poem War Photographer, the idea of the photographer being “finally alone” makes us think how he could be using it as a form of sanctuary for himself after being in all the chaotic destruction and panic of the war in which the photos he has taken are subject to. The Photographer takes solace in his his room where “the only light is red and softly glows” This could be in comparison to the harsh glare of explosions, bright sunlight or the symbolic, dark aftermath of the war and the light could be in contrast to that darkness.

The Fact that his room is compared to a church could be to show the realistic contrast between the mayhem from war to the quiet bliss of his studio. After this, it names great wars, “Belfast. Beirut. Phnom Penh. All flesh is as grass.” The last sentence shows how all the the blood, gore and people who fought are strewn across the battle field, and like grass, is normal, insignificant and unimportant.

“He has a job to do” shows how none of it matters. He just has to get on with it. “hands which did not tremble then, though seem to now.” says that, as he is looking back remembering, he might be feeling pain, remorse or guilt, for not doing anything but taking pictures. “Home again – to pain which simple weather can dispel” makes us see how, when he is looking back, his problems are minute, small and insignificant compared to all of the things which went on when he was taking the pictures. “to fields which don’t explode beneath the feet…” as he is looking at his surroundings, it’s almost as though he feels he is still there, in the midst of all the mayhem of the war, and that “Rural England” is quiet, almost painfully so.

“How the blood stained into foreign dust” shows how, as a stain, it won’t come out, and that the damage is permanent. The word foreign could be to do with the detached aspect of it having nothing to do with the photographer, wherever he is from. “A hundred agonies in black-and-white from which his editor will pick out five or six for Sunday’s supplement.” this could show how you don’t see the bigger picture, just what the magazine/ newspaper wants you to see, almost giving you the idea of looking through a keyhole in a door, you only see a small part.

“Readers eyeballs prick with tears between bath and pre-lunch beers.” this shows sarcasm, and how the war makes no difference to anyone reading this article in the long run, and how the reader, after the article, doesn’t really care. “They do not care” shows how, again, the war is, in the eyes of most people who aren’t there, insignificant.

War Photographer shows the bigger picture in a way that also shows how people don’t realize that what they are seeing isn’t the full story, as there are two sides to each and every story. The pictures he takes shows different views on things. In contrast to this, War Photograph shows this directly, letting us look through the keyhole, then opening the door, letting us see the whole thing.

Where War Photographer shows us memories of a person, captured through photos, War Photograph shows us what happens after a single picture is taken, giving us a more realistic view of the war in question. This therefore gives it more impact.

Both poems try to show us the bigger picture beneath the picture we see, which is a small snapshot that doesn’t really show anything in comparison to the whole war, and is like – I say again – looking through a keyhole.

In conclusion, War Photograph, to me, gives the best detail, and has more overall impact in comparison to War Photographer due to the use of language and structure, how it seems more dramatic, especially when Kate Daniels compares, subtly, the Americans to gods in the quote, “and she is also running from the gods.” Also how she compares the war happening as not only in another country, but in the “other world” showing just how detached they seem. 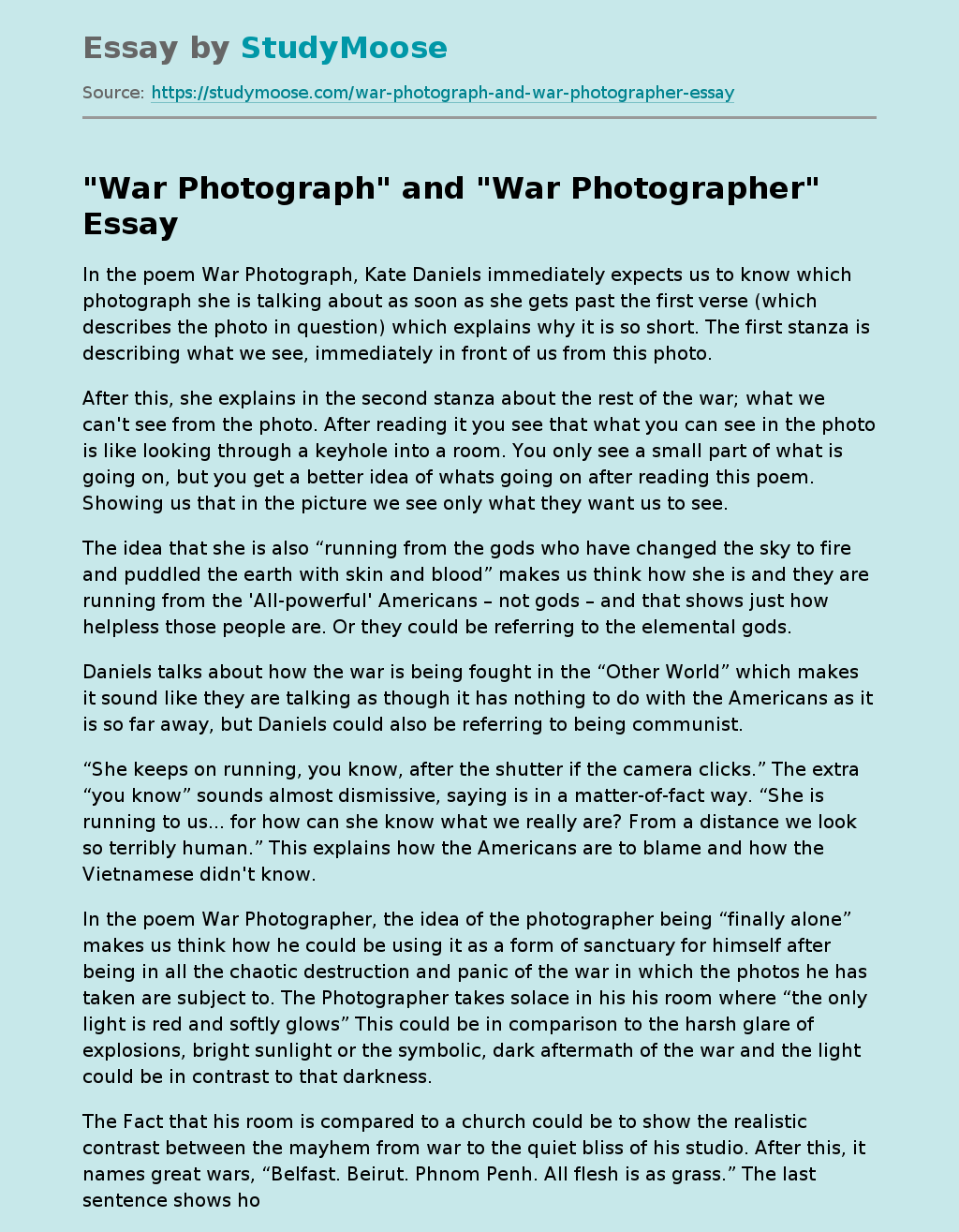