Terrorism has threatened the human population for as long as humans have existed. Terror is a person or thing that causes intense fear while terrorism is the systematic use of violence and intimidation to achieve some goal. (Centre for Human Rights, 3) Human rights are the basic rights and freedoms to which all humans are entitled to, including the right to life, liberty, freedom of thought and expression, and equality before the law. (Centre for Human Rights, 5) “War on Terror” has created more general concerns for the enacted in its name.

Don't use plagiarized sources. Get your custom essay on
“ War On Terror Argumentative ”
Get custom paper
NEW! smart matching with writer

With violent actions being caused with only political interests in mind, humanity suffers more than the government. The war on terrorism has led to increased security, surveillance of the general population, as well as specific groups of interest.

After the September 11th attacks on the United States, the U.S. declared a “war on terror.” Within American people, it was economic insecurity that aroused the greatest anxiety among them, “So, first of all, let me assert my firm belief that the only thing we have to fear is fear itself – nameless, unreasoning, unjustified terror which paralyzes needed efforts to convert retreat into advance,” said President Franklin D.

Roosevelt. That had involved “open and covert military operations, new security legislation, efforts to block the financing of terrorism, and more.” The effort has included several wars, lately the Iraq war and recently, Syria and also the war in Afghanistan.

In 1967, Israel kept Palestinian areas under their control and Israeli troops were stationed there for years; Israelis hoped they might exchange the land they won for Arab countries.

In 2005, Israel left Gaza; later a group called Hamas had taken control there. Hamas didn’t want Palestinians to remember that they were responsible for all rocket fire and wanted Palestinians to return to their homes, in Gaza. Many people in the world labeled Hamas a terrorist organization. “In 2012, at least 167 Palestinians and six Israelis were killed during an Israeli operation.” During the operations, Israeli armies killed Palestinian civilians in the West Bank and destroyed their homes. This is an example of the violation of human rights due to terrorism within a country.

The war on terror is creating great misfortune on the lives of its victims. Governments have pointed at the War on Terror as justification to take away the rights of privacy of average citizens. The Israeli attacks on Palestinians are a direct example of how the war on terror has led to genocide. The lack of morals in the war on terror has contributed to the growing abuse of human rights. One could witness the massacre of civilians in most of the major Islamic countries like Syria, Pakistan, Gaza, Palestine, and Afghanistan. In these countries these citizens become victims of the massacres. Most of these civilians are denied the right to live because they are invaded by militaries from the western countries that kill them all in the name of fighting terrorism. Since February 2012, 1,179 civilians have died in Syria and since the start of the uprising in March 2011, over 9,000 civilian deaths had occurred. (Human Right First, 2012) “Robinson Jennifer, a London-based human rights lawyer said it is time for the US to re-examine the consequences of its dehumanizing deadly attacks in Pakistan” (Al- Jazeera, 2011).

There is no way to control the shootings and bombings of these supposed terrorists. According to Al- Jazeera (2011), “Pakistanis have become increasingly angry over a US drone that kills civilians, such as a 16-year-old boy named Tariq Aziz”. Furthermore, Manach (2011) found that, the “War on Terror” civilians suffered the greatest number of deaths, between 100 and 110,000 civilians died violent deaths since 2003 to present. (http://owni.eu/2011/05/05/the-war-on-terror-in-numbers/) She further stated that the estimated number of victims from the Iraqi War could range from 100,000 to over one million. As a result, this is outrageous and an injustice which shows a breach of international Law and Pakistani law by the US government hence a violation on their human rights. In addition, torturing these citizens without trial is a significant breach of human rights. The “War on Terror” has contributed to the growing abuse of human rights. Under the United State Act and Human Right Act, everyone has the right to be judged, tried and have access to a lawyer. Suspected terrorists that are captured by the US Army are being exiled.

These civilians are tortured and detained on the slightest guilt coming from some secret organizations of the US. Sometimes, most of the civilians remain behind bars in the US prisons for the rest of their lives without being tried in any court of competent jurisdiction. President Obama and the CIA tortured and detained suspected terrorists in the Guantanamo Bay with drones without them being trialed. (http://truth-out.org/opinion/item/15086-bush-detained-terrorists-without-due-process-obama-is-killing-them-with-drones) Placing civilians accused of terrorism in prison and without trial is a major abuse of human rights but the United States government finds itself justified. Destruction of public buildings such as schools, hospitals, and power stations is also a huge issue. Due to “War on Terror”, the countries’ buildings are destroyed and it prevents the citizens from enjoying government benefit.

More than a fifth of Syria’s schools have been destroyed or made unusable in more than two years of conflict, jeopardizing the education of 2.5 million young people. (http://www.reuters.com/article/2013/07/11/us- syria- crisis-children-idUSBRE96A14G20130711) Due to demolition of the buildings such as hospitals, civilians do not get access to shelter and healthcare which makes them become very sick. A report by the Feinstein International Center in November 2012 stated clearly that, one in three Afghan children are very ill, with rates of malnourishment far higher in conflicted affected regions such as those in the country’s south. Among children under 5 years old, Afghanistan has the highest rate of stunted growth in the world. Access to healthcare remains very limited, with 15% of the population without access to even the most basic healthcare services.

In areas where there is still fighting happening, militants lack respect for the neutrality of healthcare facilities, making attending these facilities dangerous. Additionally, the “War on Terror” forces citizens to move out of their country due to the broken down state of the country after the shootings and bombings. Since they have no place to stay and can’t get access to food nor safety, the situation forces them to migrate to other neighboring countries hence becoming refugees in order to survive and have basic human rights.

We have been witnessing the deteriorating state of which this “War On Terror” is being used to actively break the law on the fundamental human rights of civilians’ of the victimized countries, in the likes of them being killed unfairly and tortured without any particular reason. Indeed, there is no argument that the “War on Terror” has increased surveillance of the general population of specific groups and given the police more powers in their jurisdiction to fight against terrorist. 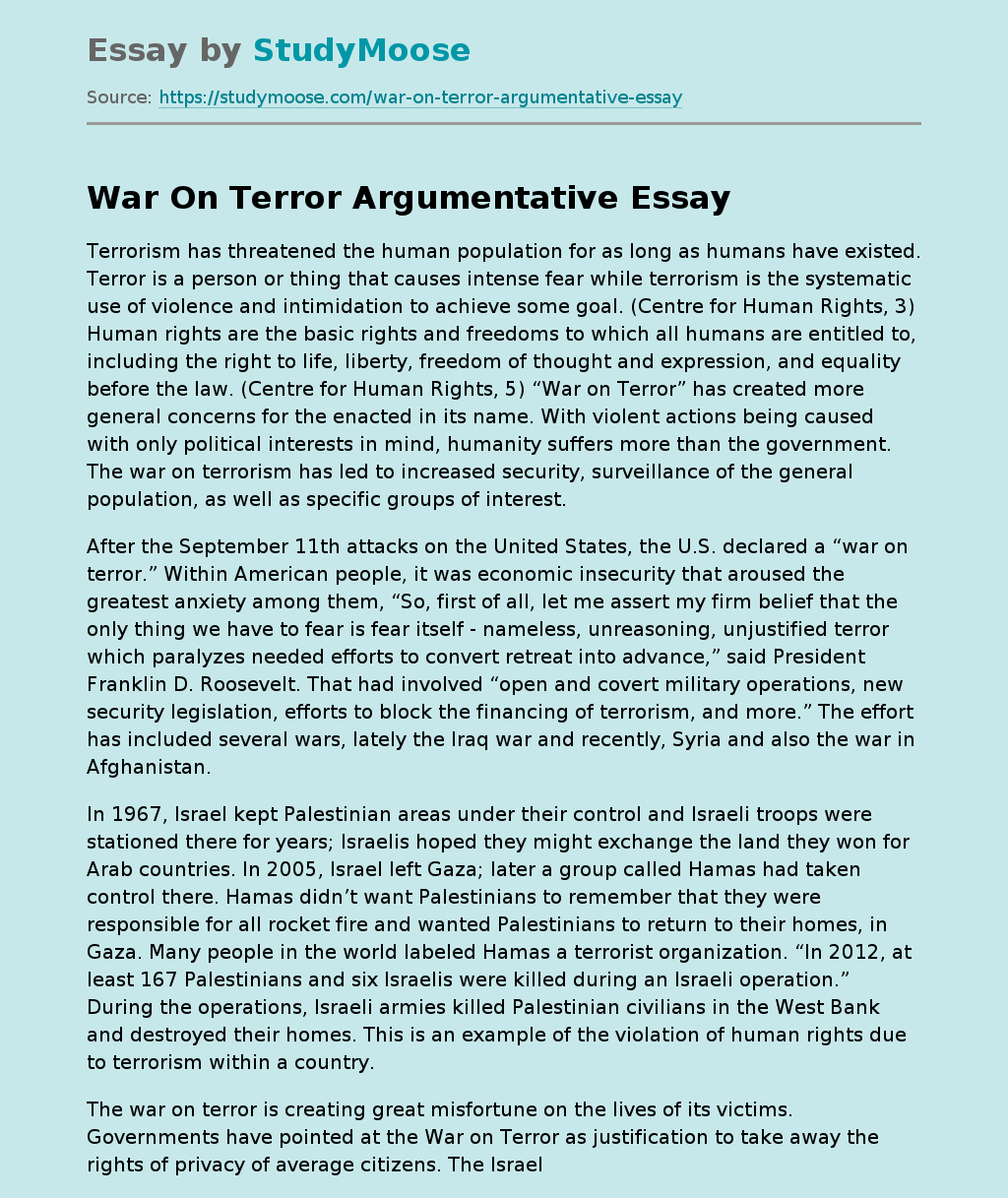