The war on drugs in the United States is an expensive and deadly ongoing battle that has not yet been won. The term war on drugs provides drug distributors with more income due to the illegal nature of drugs. Americans do not have readily available easy access to many types of drugs that are illegal. Because narcotics are illegal that is enough for many people to want drugs. This is a major problem faced today in our prison systems throughout the United States.

Don't use plagiarized sources. Get your custom essay on
“ War on Drugs and Prison Overcrowding Analysis ”
Get custom paper
NEW! smart matching with writer

Especially in the state of California where many people find their way into our criminal justice system due to many factors stemming from drug usage. We are going to look at how the war on drugs play a role in California’s overpopulated prisons.

Additionally, we are going to discuss three proposals to help decrease the overpopulation due to the war on drugs. It is true that once a person is convicted and sentenced to prison; he or she has a high probability of returning to prison.

The rate as of 2010 was at 71.3 percent of prisoners on parole return to prison (Stevenson & Anderson, 2011). This is an alarming rate and much needs to be configured to help reduce this high percentage.

War on Drugs and Crowded Prisons

In the state of California there is a major problem that was addressed in 2011. The issue of concern involved the overpopulation of prisons throughout the state. The overcrowding of the prison system in California violates the United States Constitution (Li, 2011). This was ruled by the United States Supreme Court.

The added problem to the overpopulation is the fact that California is going through a financial hardship. This means that there is not enough money in the budget to build more prison that does not violate the constitution. It could also mean that the many prisons built throughout the state contributed to the financial issues faced throughout California (Li, 2011). The facts remain that California spends about 5 billion dollars per year jailing and taking care of the growing inmate population (Li, 2011).

The inmates housed in jails and prisons throughout the state are not being rehabilitated. There is a tough integration faced by paroled inmates to reintegrate back into society. There is a mark on his or her record that validates the individual as a convicted felon. Many leave the prison system with nowhere to go and end up homeless to return to the streets. With inadequate housing and no job the prison system becomes a revolving door throughout the inmate’s life (Li, 2011). Drugs play a major role in recidivism and the initial sentencing to prison. The United States spends 51 billion dollars annually financing the war on drugs. The question can be asked and argued if the war on drugs is a successful mission. President Richard Nixon officially started the war on drugs in 1971 (Drug Policy Alliance, 2012). There is skepticism in relation to why and how is this war on drugs being fought or if we actually as a country pro-active against drugs crossing our borders. In 2011 federal charges that sentenced convicts to imprisonment consisted of 197,050 people.

Of this population 94,600 of these federally convicted felons were sentenced due to drug charges (Gillard, 2013). In 2011 state charges consisted of 1341, 804 convicts were sentenced to prison. Among these inmates incarcerated 225,242 were sentenced due to drug charges (Gillard, 2013). Not only are convicts sentenced for drug related charges or other charges like theft and murder that stem from drug usage or drug financing; there is an additional problem faced within the prison system in California. Drugs find their way in through prison walls and distributed to inmates state wide. The money earned from the sale and distribution of narcotics fund gangs and their agenda. This money also funds the drug kingpins within the state, country and abroad to continue operation. The war on drugs does not appear to make a major change or shift to the drug lords and their subordinates that continue to operate within the state crossing the United States border for distribution.

What are some things that can be done to help the fight with the war against drugs? If the ideas demonstrated were put into use in a proactive manner, it is possible to help reduce the inmate population not only state wide, also country wide. The reduction of inmates is the goal in the state of California and AB109 may not be the answer in releasing inmates and sending non-violent inmates to jails from prison. Reducing inmate population can help citizens feel safe in their community and provide the state with adequate funding for other projects needed. With this it is possible to refocus our attention as a society and criminal justice experts to help inmates reintegrate into society in a productive manner. There are many positives to try new innovative ideas to help the fight against drugs and reduce inmate population. The paragraph followed will introduce personal innovative ideas that can possibly help the war against drugs along the borders in California and the country.

Proposals for Overcrowded Prisons and War against Drugs

As a country and tax paying citizen we spend entirely too much money annually to fund the war against drugs. Again this has been an issue going back at least 42 years ago since President Richard Nixon initialized the war against drugs campaign. I feel it is our duty as both state and federal law enforcement professionals to become stiffer at our borders and within the state of California. This means that there should be a zero tolerance level initiated against those individuals or groups of people that cross our borders with narcotics. The penalties should include joint establishment with the Mexican Government to incarcerate and convict those crossing the borders illegally. Incarceration should be maximized and the penalties for such acts should include death. Retaking our borders is a key essential task that must never be compromised.

It is imperative that we protect our borders and our citizens against such acts of crime. It is my mind set that drugs that cross the borders contribute to murder, theft, rape, kidnapping, assault, drugs, terrorism and many other crimes that stem from the sale and distribution of drugs. We must make our duty to by all means take out those groups or individuals that have an agenda of bringing contraband across our borders. If this is a war against drugs then we need to treat it as such. From the war I know about there is zero tolerance against certain issues and must be dealt with swiftly. The United States Supreme Court addressed the concern in California for the overcrowded prisons. AB 109 was a bill passed to help reduce the prison population to 137.5 percent (Li, 2011). This is not a solution because many inmates are released and returned to our society un-rehabilitated.

Due to the financial situation faced in California it is unfortunate that rehabilitation does not take priority in our jails and prisons. The objective was to reduce the prison population to be in federal and state compliance. This is needed so that inmates are not housed in a manner that takes away their liberties protected by the United States Constitution. We need to look into building relations with privatized prison systems where non-violent inmates can be housed and rehabilitation can be a focal point for reintegration into society. This can help reduce the current crises faced in our jails and prisons throughout the state and will help the war against drugs. Providing jobs for privatized prison personnel alleviate the issue of overcrowded prisons is needed. We can utilize professionals to treat those inmates with drug addiction problems that help land him or her into incarceration. We are able to do so by providing more jobs in privatized prison that in turn give the state more financial revenue.

With this we can focus our efforts to rehabilitation process for inmate reintegration into our society. My third proposal is focused on educating the community through social media, television, city council meetings and so on concerning the war against drugs and the fight against crime in their local community. We need our local law enforcement involved teamed up with citizens so that we as society feel safer about reporting criminal activity and behavior. This type of activity is actually being done in Upland, California. Not necessarily in that manner however citizens are able to log onto the city website and view the crime mapping system of the city. With this citizens are armed with essential information concerning local crime in the immediate area. This makes me feel safe because I reside in Upland, California and have utilized this tool.

Not only in the state of California is the war on drugs a major problem. We face this problem as a nation and on a global scale. I feel it is necessary to focus our attention locally that can stem into a nationwide solution for the war against drugs. Drugs ruin the lives of the criminals involved and most importantly the innocent people that do not have any relations to criminal activity. As a state we are facing a financial issue that needs to be addressed immediately. We are also facing a crisis concerning the over-crowded prisons and jails within the state of California. AB 109 is not the answer we need to release inmate and return non-violent to jails from prison.

We need to focus on rehabilitation programs, privatizing prison systems that enable such rehabilitation to exist. We need to fight at our borders with a zero tolerance for contraband across our borders. We need to work with other governments such as Mexico to help enforce a zero tolerance against drugs and crime. We need to fight back and housing these animals is not the answer. The drug cartel is a strong organization and the only way we can even begin to see improvement is to fight and eliminate the enemy at all cost. I have provided you with imperative information concerning the crisis in California with statistical information as well as 3 proposals that may help provide jobs, state revenue, safer community, and fight against crime and war on drugs. If this is indeed a war enacted by President Nixon in 1971 then we need to fight it like a war. 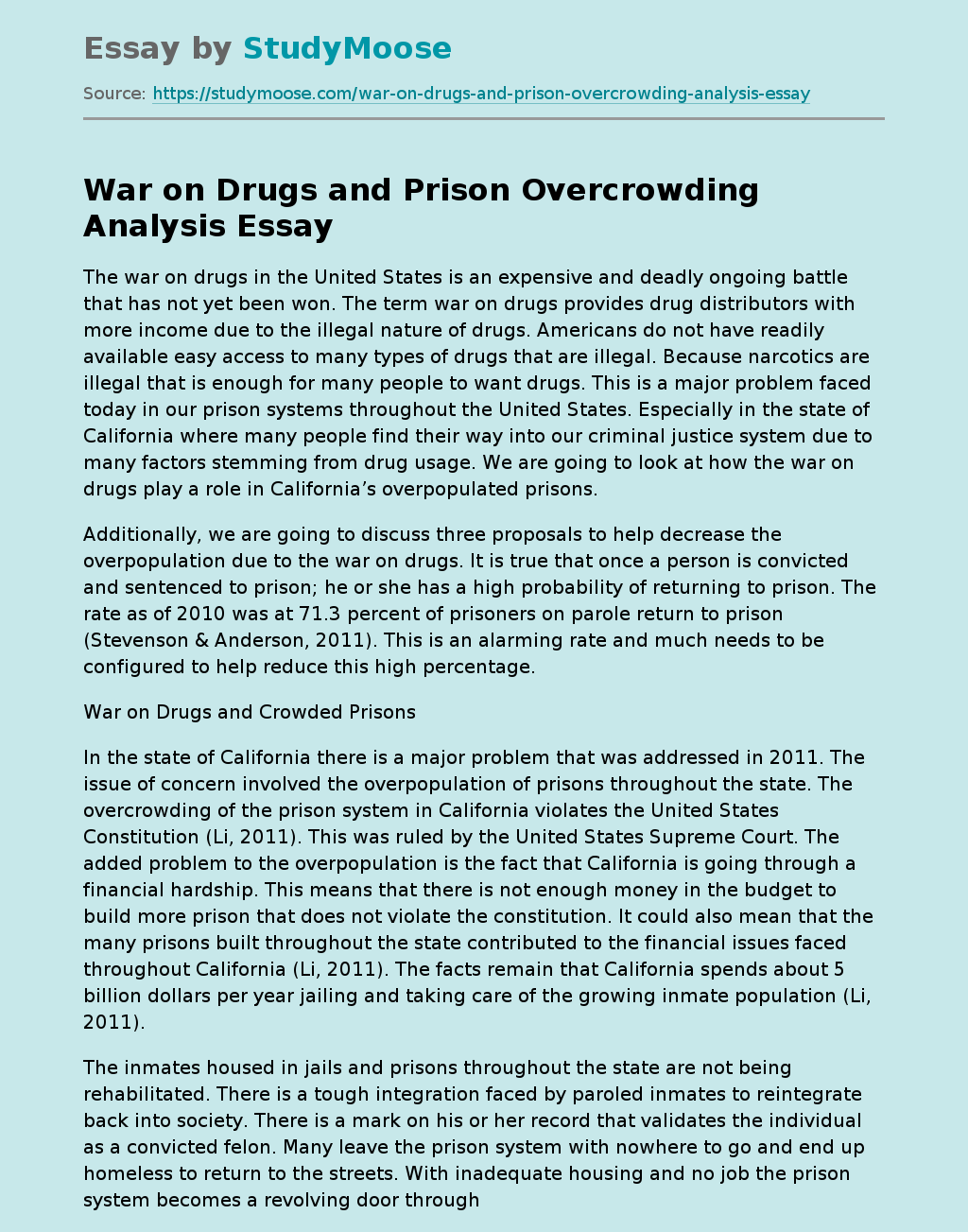