War in "Avatar" and "The Ash Garden"

War has the undiscriminating and destructive power to alter, destroy and transform places and lives it touches. In James Cameron’s movie, Avatar and Dennis Bock’s novel, The Ash Garden, the main characters`, Jake Sully and Neytiri (Avatar) and Anton Böll and Emiko Amai (The Ash Garden), humanity is tested and enduringly transformed by the destructive effects of war they experience. These experiences show the far-reaching power of war and the life-altering physical and psychological impact on both combatants and non-combatants alike.

Don't use plagiarized sources. Get your custom essay on
“ War in “Avatar” and “The Ash Garden” ”
Get custom paper
NEW! smart matching with writer

As war blows the characters’ lives apart, it also transforms them; as suffering, either through pain or guilt, can build strength, resilience and resolve which leads to acceptance, atonement and sometimes forgiveness.

One of the destructive effects of war on combatants like Jake Sully, a paraplegic ex-Marine, and Anton Böll, a nuclear physicist, is they both suffer from guilt because they regret the consequences their involvement in their respective wars has brought. Both of their war involvement was centred on a dream: Jake, to earn money for spinal surgery so he can walk again, and Anton, to reach the pinnacle of nuclear science.

Jake is distraught when “Home Tree” is destroyed by his people in an effort to drive out the Omaticayan clan so their land can be mined for unobtanium. He feels profoundly guilty for not disclosing that his real mission was to befriend them in order to convince them to move from their sacred land. He is truly sorry for deceiving his love interest Neytiri and her people who accepted him, initiated him into their clan and trusted him.

When he sees the black scorched landscape after the firebombing, he remorsefully reflects “Outcast. Betrayer. Alien. I was in the place the eye does not see” (Avatar). He thinks his sin is so great that even Eywa, their deity, that he has come to believe in and respect, would not even look at him. To make up for the role he plays in the destruction of their sacred “Home Tree”, Jake wins their trust back, proves allegiance to them and leads them to victory over the human invaders. For Anton Böll, his regret lies in the consequences the bomb brought on the city of Hiroshima and its citizens that were obliterated or maimed by it. At his final lecture at Colombia University, while reminiscing about the successful testing of the atom bomb, Anton confesses that it “had been a life-long dream…And as we all know, dreams sometimes become nightmares” (Bock 11-12). Though Anton has been trying to convince himself for fifty years that dropping the bomb was a “necessary evil” to save lives and stop the war from continuing, he continues to be haunted by the cataclysmic destruction of Hiroshima and the horrific effects on innocent civilians. Anton tries to atone for his sin by returning to Hiroshima many times to record the devastation and suffering so there will be historical proof of the catastrophic impact. Feeling he has not done enough, he volunteers at the Hiroshima hospital where six year old Emiko is being treated for severe burns to her face and back, and ensures that she is one of twenty-five girls chosen to go to the US for reconstructive surgery as he had promised her grandfather, her only surviving relative. He also attends and records every Hiroshima memorial for over fifty ears. Anton prepares for the day that Emiko would one day find him and ask him “why?”.

When all seems lost, it can be very difficult to remain strong. After everything Neytiri and Emiko endure, all of the hardships they experience, they both try their best to keep their strength. Neytiri, being the daughter of the Omaticayan clan leader, has had responsibilities destined for her from birth. However, do to the war that the humans brought upon her world, Neytiri is forced into those responsibilities quicker then she is prepared for. During the desecration and demolishment of “Home Tree” Neytiri comes across her father’s broken and dying body. Neytiri, being already shaken from witnessing the destruction of her home and her people, loses all emotional control as she kneels over her fathers body. With his last few breaths, Neytiri’s father gives her a great responsibility, “Daughter, take my bow. Protect the people” (Avatar). While Neytiri hysterically sobs for her father she pushes Jake away in anger, screaming at him to never come back. As she cradles her fathers lifeless body, her moans of grief expose her weakened state. Not only is Neytiri suffering from the pain of losing her father, but also from losing her home, her people, and her mate (Jake). Nevertheless, as broken and beaten as Neytiri might seem, she still stands with her head held high. Acting as the strength for the rest of her people. Neytiri demonstrates her strength by praying and singing with all of what is left of her people at the “Tree of Souls”. Showing that even in times of great sorrow, her and her people have strength through Eywa. Following this, Neytiri also shows courage as she stands with Jake in front of the Omaticaya, and proudly howl’s, “This is our land!” (Avatar). Encouraging her people to fight back against the Sky People, the humans, and to reclaim what is rightfully theirs. Regardless of the hardships Neytiri has faced, she never losses her bravery. The same can be said for Emiko. Even as a child Emiko refused to submit to her pain, refused to look weak in front of her “enemy”. During her stay at the hospital, Emiko spitefully exclaims, “Already I knew I would never acknowledge the pain I endured…But I would never submit willingly to these men. They were the people who had done this to me and my brother, the men who had killed my parents. Revealing my pain to them increased my humiliation, serving to tell them I had been defeated, just as they’d hoped I would be” (Bock 37-38). Emiko constantly feels as though the American’s treated her as though an objection of their fascination; dehumanizing her. Emiko promise to not show weakness is a sign of her strength and courage. That no matter what happens to her or what the Americans say or do, she will stay strong and not break like she believes they are expecting her too. Despite everything Emiko has endured over her life, she has not once given up. Leaving Japan to go to American to have facial reconstructive surgery is a milestone in her journey. Just as she did not want to look weak in front of the Americans for the sake of her mother, father, and brother, Emiko agrees to go to America for the sake of her grandfather, because he tells her to go. The strength she musters up to leave the only home she’s ever known, in her current state, not only shows her courage but also displays how her courage is fuelled from the love she has for her family.

War does not discriminate when doling out injuries to those directly or indirectly involved in an armed conflict. The protagonists, Jake Sully, Avatar, and Emiko Amai, The Ash Garden, both endure life-altering physical injuries as a result of war. As a Marine, during a mission on Earth, Jake Sully suffered a spinal cord injury and lost the use of his legs rendering him a paraplegic. He was unable to return to “military duty” until he was offered an opportunity to take over his identical twin brother’s military contract to control the Na’vi avatar on Pandora designed for his brother’s DNA.

War in "Avatar" and "The Ash Garden". (2021, Feb 19). Retrieved from https://studymoose.com/war-in-avatar-and-the-ash-garden-essay 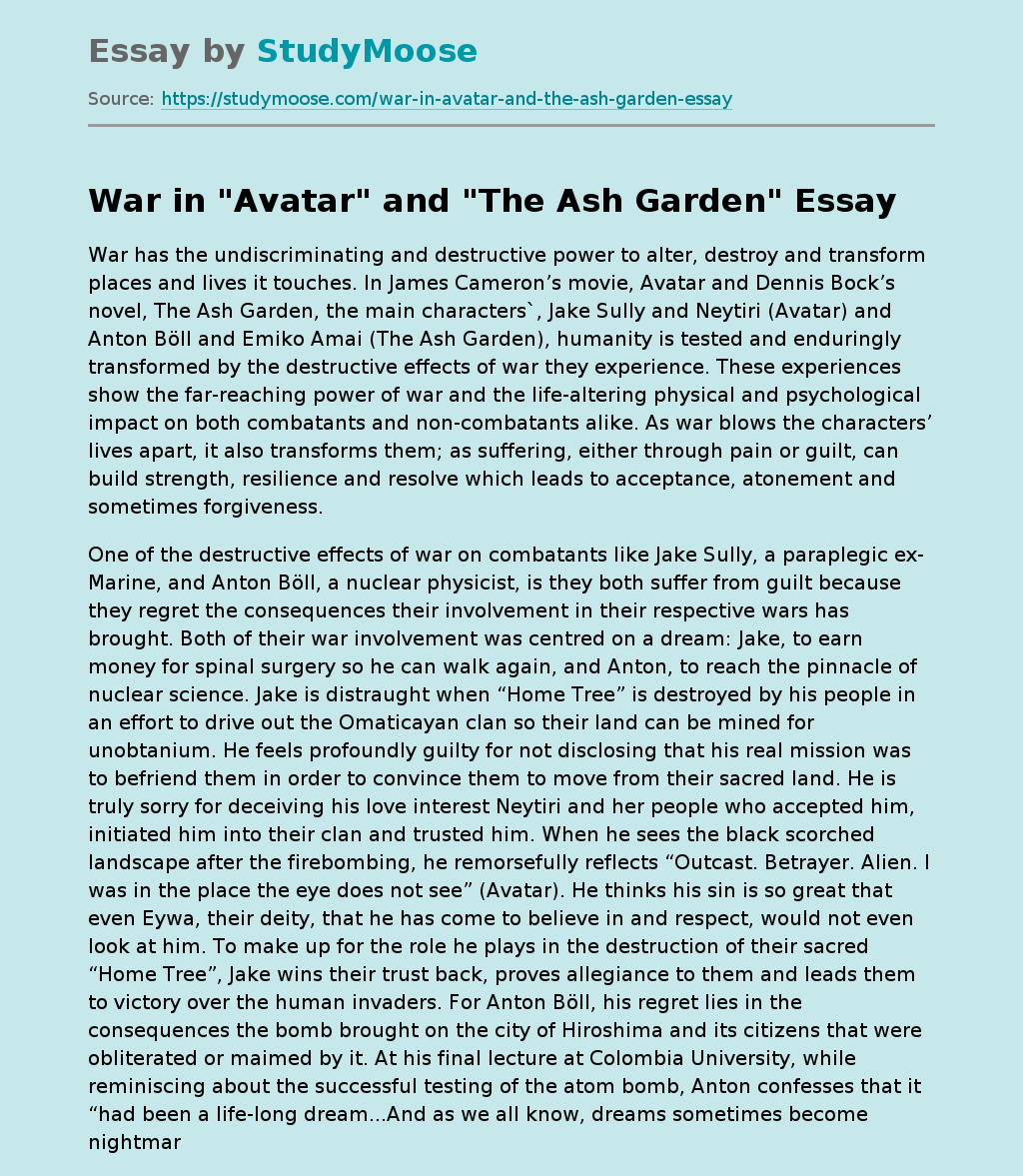