The Walt Disney Company, is an American multinational corporation located in Burbank, California. It is the largest media conglomerate in the world in terms of revenue. Disney was founded on October 16, 1923, by Walt and Roy Disney and established itself as a leader in the American animation industry. Disney has created new divisions of the company in order to market more mature content than it typically associates with its flagship family-oriented brands.

The company is best known for the products of its film studio, the Walt Disney Studios, and today one of the largest and best-known studios in Hollywood.

Disney also owns and operates the ABC broadcast television network; cable television networks such as Disney Channel, ESPN, A+E Networks, LifeTime and ABC Family; publishing, merchandising, and theatre divisions; and owns and licenses 14 theme parks around the world. It also has a successful music division. The company has been a component of the Dow Jones Industrial Average since May 6, 1991. An early and well-known cartoon creation of the company, Mickey Mouse, is the official mascot of The Walt Disney Company.

Euro Disney S.C.A. is the company that owns and operates Disneyland Paris in Marne-la-Vallée, France. 39.78% of shares are held by The Walt Disney Company, 10% by the Saudi Prince Alwaleed and 50.22% by other shareholders. The stock is traded on the Euronext Paris exchange. Disneyland Paris comprises Disneyland Park, Walt Disney Studios Park, Disney Village, and seven on-site Disney Hotels. Val d’Europe is a new residential and shopping development.

Another seven hotels/residences have been built not far from the two Disney theme parks on land held under Euro Disney SCA’s lease, including properties from companies such as Holiday Inn, Kyriad, MyTravel and Radisson Hotels. The Resort is a result of an agreement signed on 24 March 1987 between The Walt Disney Company and the French Authorities for the development of a new tourist destination, and construction began within a year. Since opening on 12 April 1992, the Resort has created more than 30,000 jobs (both directly and indirectly) in the region to the east of Paris. Today it is the number one tourist destination in Europe with 14.5 million visits recorded for Financial Year.

There are many companys which offers many packs for families. Below some examples.

Thomson gives you the opportunity to cutomize your trip:

Hotels inside the Amusement Park: There are many opptions for accomodation indide the park. In total there are 14 hotels. Some examples as follows:

1) What did Disney do wrong in its planning for Euro Disney?

EuroDisney made different financial ​​strategic mistakes .Taking into account the studies predicting the good economic panporama The growth would be very fast, which means good benefits for the region. But the reality was very different, It means the prediction was wrong. Maybe the will need to made two or more financial Studies befote taking a desition.

Another of his errors was the European habits which had changed.

From the American experience the highest assitance would be on friday’s, the opposite occurred. The company had difficulties planning the number of workers for those days.

Another operational errors was the computers of the hotels. EuroDisney was based on that customers spent several days in the park. The reality was very different, customers arrived very early in the morning to spend the day in the park and get to the rooms at night to leaving the next day. Queues to pay dragged on the grounds that there was only one computer. They had to install several computers addicionales to reduce queues.

2)What recommendations would you make to Disney to deal with the problems of Euro Disney?

EuroDisney uses Other Strategies to Solve the Problem of the Situation

Name change to Eurodisney Disneyland Paris, so well adapted to European tastes and give a disastrous change in customer care. Through the emphasis of recognizing Paris, executives capitalize on the proximity of the park to the French capital.

Keeping costs and increase revenues decreased 8.6% of its labor potential. In response to criticism of high ticket prices and hotels EuroDisney decided to introduce offers and new prices for hotels in low Seaton

Disney company changed its marketing philosophy to attract customers from other countries such as Israel and Africa. Instead of offering the park as a holiday destination

3)What lessons can we learn from Disney’s problems with Euro Disney?

Misunderstand food habits and customs of Europeans. They learned that for foreign market, it is necessary to conduct a comprehensive study of the customs in that country which they did not do.

These results obtained in human resources can help l from this process and this be applicable everywhere in the world.

1.How should the park differentiate itself from the competitive treta posed by the growing number of European amsusement Parks? The main and most important reason is that it is the only amusement park in Europe related to Disney. In my point of view it would be important to provide prices, packs, etc. for children under 7 years, for example, for birthdays, facilitate price, queues etc… Finally renovation, uptades or new attractions design quite often.

2. What target marketing strategy should be pursued in the face of the changing competitive environment? A marketing strategy that positions Euro Disney as a affordable, fully equipped and multicultural park rather than just an American import. This can be done through the following:

Signs and ads should be multilingual

Food and drinks should be fitting for European tastes.

Characters and casts should be more presentable to French culture in specific and European in general.

Euro Disney is for Europe and not a form of an Americanized location in Europe.

3. What branding-strategy decisions are relevant?

When it comes to the branding strategy, the image of Disney as a brand needs to be maintained as an amusing and incredible experience for everyone. However, again it should be directed in a way to fit the European perceptions of Amusement parks and not the American style. Plus the brand should have the attribute of being the worlds best amusement park provider by displaying the success it has in the U.S.A and in Japan. Meaning that you can have the thrill and experience that Disney as an organization offers you but in Europe.

4. What can be done to make better use of underutilized resources (such as the Hotels) while increasing the profitability of well-patronized facilities?

On the short term the most sensible idea is to have a well-fit price for the current economic situation in Europe. Disney Europe can offer packages and promotions for visitors based on the seasonality and demands of the European consumers. A combination of promotional packages can help boost the number of visitors who will find it more appealing to go to Euro Disney rather than any other park because it has a combination of facilities at a reasonable price.

Disney wanted to Americanize European customs. That mistake led to the executives to build an amusement park of your dreams, but following a American model and thus strictly different from physical reality, financial and cultural center of Europe and France. To enter the European market, should make a more detailed study based on research into every applicable aspect of the economy, laws, culture, climate, interests, customs, habits in lifestyle, geography, work habits, among others.

This case demonstrates the importance of taking into account the Consumer Comportamientodel when making decisions about new products or paraextender existing products to new markets. It is vitally importanciatener into account social factors such as habits, culture, customs, language, demographics, socioeconomic status, etc.. What to darsecuenta of which is the best way to reach that market. 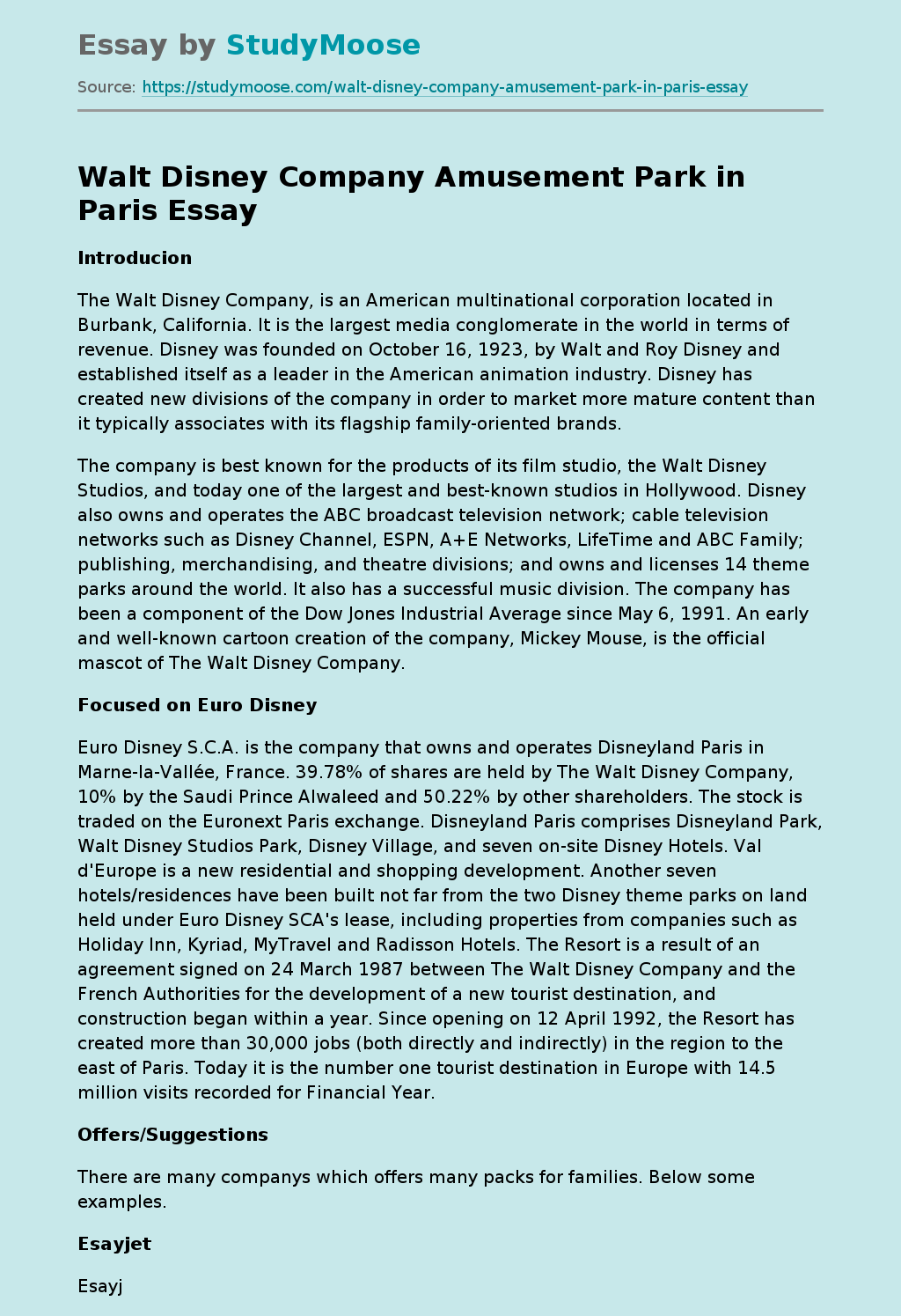