While reading this case about Walmart, one of my own personal experiences kept coming to mind. I was shopping for my first TV, and was discussing the options with my friend. I said that I had looked around at Best Buy and Target, but I would probably get my TV at Walmart because they had the best prices. My friend, however, was scandalized that I would even consider shopping at Walmart. “Do you know how they treat their employees?” he demanded.

Turn in your highest-quality paper
Get a qualified writer to help you with
“ Walmart Strategic Recommendation ”
Get high-quality paper
NEW! AI matching with writer

“They barely pay them a livable wage, and half the time without benefits!” This exchange between my friend and I effectively sums up the general attitudes regarding Walmart– yes, we consumers know that Walmart has questionable operational policies and ethical concerns, but we shop there anyway because we want the best price. In this case, I ended up getting my TV at Walmart because they offered a price at least $30 cheaper than other models of the same size at other retailers.

As a college student, I don’t mind sacrificing quality for frugality. In fact, this purchasing ethos (looking for the best price instead of the best product) has gained popularity in the general consumer market, especially since the economic recession. The case stated that Walmart had a period of time where consumers were “unsure” that they offered the best prices. Although I am hesitant to argue with a Harvard Business case, I really don’t believe that Walmart’s pricing was ever seriously in question.

I think that Walmart may have seen a dip in sales volume because consumers were, in general, guarding their money more tightly due the economic recession– not because they thought they could find a cheaper price anywhere.

While Walmart has tried various strategies throughout the years– from offering organic foods to focusing on their store environment (similarly to their top competitor, Target)­– the strategy that has consistently succeeded for them is their focus on low prices. This includes their pricing on shipping costs for online shoppers, to keep them on par with Amazon. In fact, Walmart offers a free in-store pickup option for online purchases that Amazon can’t mimic. In my opinion (and this may be harsh), Walmart need not be too concerned with public opinion. While they shouldn’t flagrantly disregard PR concerns, their prices are too good for consumers to boycott at large. For me personally, I don’t like to support a company that doesn’t treat its employees well, but as a college student I can’t afford to be picky. When shopping for my apartment this year, I bought nearly everything at Walmart, finding them to be cheaper than discount furniture stores and Ikea. And with the economy still recovering from the recession, many people are still forced to pinch pennies. Consumers don’t expect to come to Walmart and see a pristine store featuring organic foods and designer clothes– they come to get low prices. Walmart would be foolish to go with any other strategy. 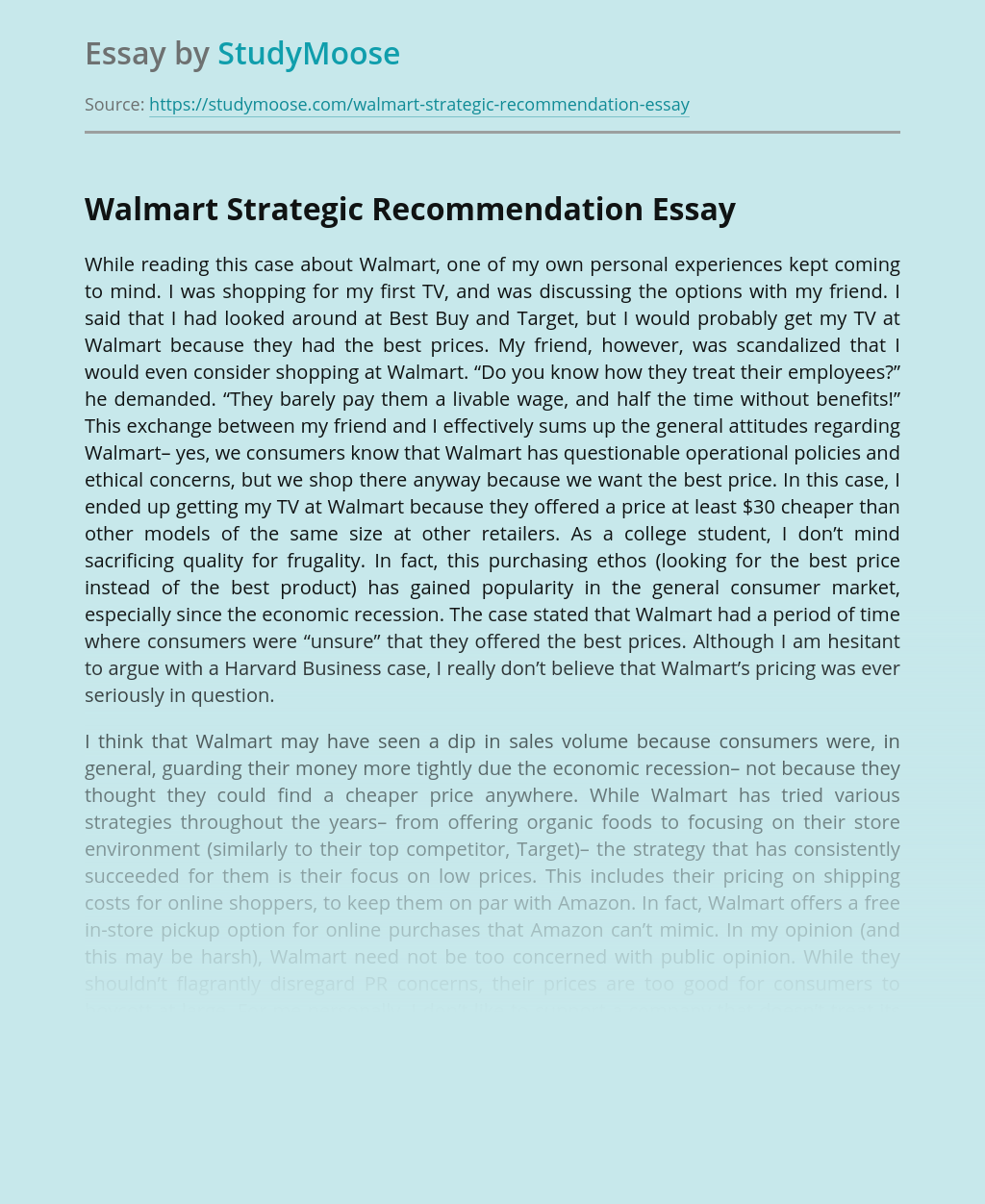 Turn in your highest-quality paper
Get a qualified writer to help you with
“ Walmart Strategic Recommendation ”
Get high-quality paper
Helping students since 2015
Stay Safe, Stay Original