Alice Walker uses a variety of techniques in ‘The Color Purple’ to present the growing relationship between Celie and Shug. Using pages 68-70 as a starting point I will be exploring attitudes towards sexuality as well as a number of lexical, grammatical and phonological choices. As soon as Celie encounters Shug Avery, we get the sense that she already has a sub-conscious sexual desire for her.

“First time I got the full sight of Shug Avery” she says, “I thought I had turned into a man,” and from this description we can see that Shug Avery is a big factor in expanding Celie’s mind and feelings towards other desires and ideas.

Don't use plagiarized sources. Get your custom essay on
“ Walker & Celie and Shug’s growing relationship ”
Get custom paper
NEW! smart matching with writer

This point in then developed by a subsequent sentence, “I wash her body, it feel like I’m praying. ” Celie, being a strict believer in God, is obviously moved in new and different ways by the presence of Shug. Celie uses prayer to escape from her life and talk about issues that have, or are currently, troubling her.

Thus, the presence of Shug allows Celie to mentally free herself; even though Shug is slightly bitter towards Celie. Later on in the novel Celie discusses her frequent rapes by Alphonso; thus reinforcing the point that Celie is able to discuss private and sensitive issues with Shug only. A close and personal link is created by Celie and Shug’s first physical encounter. Celie’s sexual urges for Shug continue to develop in a later letter. “If I don’t watch out I’ll have hold of her hand, tasting her fingers in my mouth.

” The syntax of this sentence shows a change in desires; the caesura splits a relatively soft, harmless urge with one of more extreme consequences; thus showing Celie’s confusion over her desires. The use of a complex sentence represents that Celie does not wish to pause whilst describing the event as it offers her too much pleasure. On the other hand Shug still resists Celie and does not wish to know her, “Can I sit in here and eat with you? I ast. She shrug. She busy looking at a magazine.

” It becomes obvious that Shug has other issues and matters on her mind; conceivably Shug is thinking about her current relationship with Albert and where her future lies. The relationship between Albert and Shug begins to upset Celie and make her jealous, but jealous of whom? “He love looking at Shug. I love looking at Shug. But Shug don’t love looking at but one of us. Him. ” Celie could be jealous of Shug, as she believes Albert is her husband and relationships should relate to the marital situation. Although, Celie could be jealous of Albert in that she doesn’t want Albert sleeping with Shug, Celie wants Shug to herself.

This could reflect Celie’s growing feelings for Shug and the fact that Shug is beginning to become more involved in Celie and her life. The use of the third person singular object pronoun, ‘him’, portrays that Celie has little respect for Albert and that she is too disgusted to mention his name. The fact that it is a sentence on its own conveys that Celie wishes Albert was not involved in a relationship with Shug and also that Celie was not married to Albert. Celie views Albert as an intruder in her relationship with Shug. 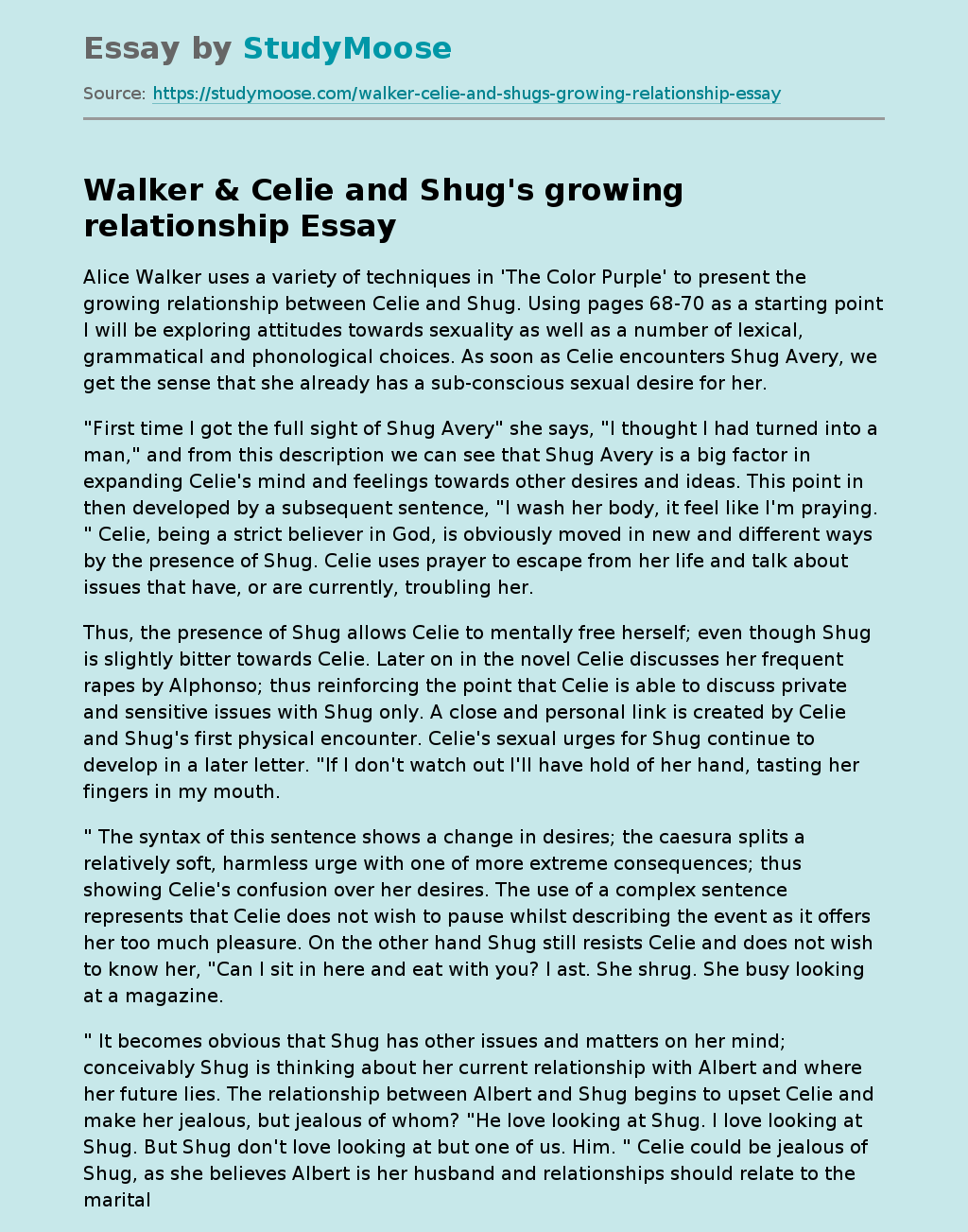