For the world’s largest retailing company, Wal-Mart, Inc., the German market was proving difficult to crack. By 2003, even after five years of having entered Germany, Wal-Mart was making losses of millions of dollars over the five-year period. When attempting to expand a business overseas there are several important areas that must be taken into account in order to give the business a fighting chance. Possibly the most important issue is to avoid ethnocentrism which is the “belief that one culture is superior to others”.

Turn in your highest-quality paper
Get a qualified writer to help you with
“ Wal-Mart’s German Misadventure ”
Get high-quality paper
NEW! AI matching with writer

Wal-Mart failed at abandoning an ethnocentric viewpoint and this combined with other failures lead to their financial disaster in Germany. There were many cultural differences between the German and American markets, but one of the biggest differences was the way that people perceived low prices. Wal-Mart prided itself on its low prices and this was the primary reason for their success in the United States, where the Americans loved to buy goods at what they felt was a bargain price and shopped around in order to get the best deal.

However, in Germany very low prices were often viewed as accompanying a poor quality product. This cultural difference could have a devastating affect on a company that prided itself on the lowest prices. One other was that Americans liked to buy everything in large quantities and got all of their shopping done at one location. But in Germany, people did not mind going to many different shops in order to get everything on their list and go to these shops every day to only purchase the amount that they needed for that one day.

One of Wal-Mart’s first business decisions in Germany was to buy out several retail chains then redesign the outlets in order to fit the Wal-Mart style. This gave the impression to the managers that Wal-Mart was going to do business in their own way whether or not the Germans liked it.

Furthermore Wal-Mart had the practice of forcing its vendors to supply the first shipment of goods on credit and then Wal-Mart would not pay them until they had either shipped another load or had ended their business relationship with Wal-Mart. By receiving the first shipment on credit, Wal-Mart was able to keep large amounts of money under their control. This method of buying on credit upset Wal-Mart’s vendors in Germany and brought them into a revolt against the company. Moreover, Wal-Mart executives’ over confidence from their success in North America obviously did not suit them well when expanding into Germany. If they had stepped back and thought about the situation they were jumping into and ignored their previous success, they would have been able to better see the cultural differences that eventually could have avoided Wal-Mart’s great financial loss in Germany.

One of the most surprising mistakes made by Wal-Mart was that the American bosses placed in Germany could not speak German. Meanwhile they placed the pressure on the German managers by expecting them to speak English instead. Unable to communicate in a complete manner immediately placed strains on Wal-Mart’s German relationships. Before reconstructing the outlets in order for them to fit the Wal-Mart model, Wal-Mart managers should have spoken with the German managers to find out the strengths and weaknesses of the current outlets. Then Wal-Mart could have made an informed decision as to whether or not it was appropriate to redesign the layout of the buildings. Communication on a personal level would have gone a long way in securing Wal-Mart’s success in Germany.

Wal-Mart faced problem on the political and legal fronts as well. Germany’s government placed price bottoms on many goods that Wal-Mart sold directly undermined their ability to be the low price leader. According to German laws, large companies were allowed to lower prices only after providing justification for the lower prices. As a result, Wal-Mart ‘s selling goods at prices below cost price was accused of breaching the competition law in Germany, in while such low prices were regarded as leading to unfair competition against small and medium-size retailers, and that Wal-Mart was forced to abandon its low pricing strategies. When looking at the failure attempt of Wal-Mart’s expansion into Germany, the term disastrous came to mind and it would be interesting to see how Wal-Mart would adopt its international marketing strategies into other countries in the future. 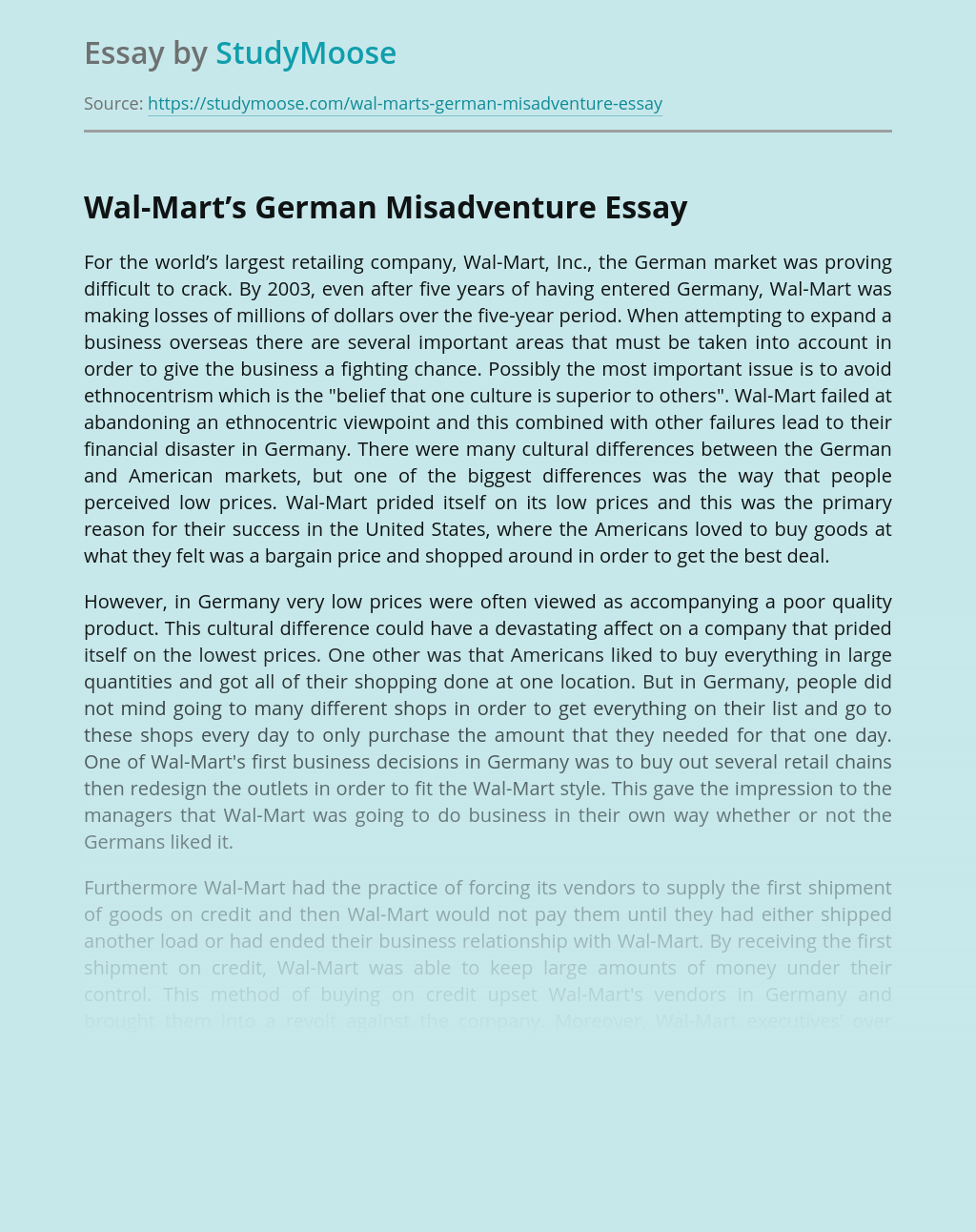 Turn in your highest-quality paper
Get a qualified writer to help you with
“ Wal-Mart’s German Misadventure ”
Get high-quality paper
Helping students since 2015
Stay Safe, Stay Original