With a market in 69 different banners and in 27 countries, Wal-Mart is one of the biggest corporations of our time. All of Wal-Mart’s success has been received by the core competencies that the corporation holds within them. Wal-Mart has become one of our world’s largest and cheapest retailers all over the world, which is only part of how and why Wal-Mart is one of the greatest corporations in our society and world today. Wal-Mart can contribute its success to its core competencies.

Don't use plagiarized sources.
Get Your Custom Essay on Wal-Mart Core Competencies Just from $13,9/Page

Core competencies are capabilities the firm emphasizes and performs especially well while pursuing its vision. Wal-Mart has plenty of core competencies, whether they are little or big, however the bigger ones are more noticeable.

Wal-Mart’s top five core competencies are; low cost operations, distribution, culture, logistics systems, and environmental awareness. 1. Low cost operations. When serving customers and members over 200 million times a week, Wal-Mart must have something the people want. With some of the lowest prices ever on everything from toothpaste to tires, Wal-Mart has the right idea.

Since 1950 Sam Walton, the founder of Wal-Mart, has been trying to lower prices in numerous ways. Walton started by offering low cost by spending less. Still to this day Wal-Mart’s executives stay the night in cheap hotels and even share rooms. This was started to help reduce the cost of Wal-Mart’s expenses, which in turn lowers the price of their products.

Walton, and even the current CEO and executives at Wal-Mart also talk with their suppliers to see how the suppliers can reduce cost which then lets Wal-Mart lower prices even more. With Wal-Mart reducing its own prices and the prices of their suppliers, Wal-Mart is able to keep their low everyday prices for consumers all around the world. 2. Distribution. With over 140 distribution centers worldwide, Wal-Mart has been able to reduce distribution cost and time needed to make a delivery.

Wal-Mart noticed the cost and time it took to deliver their goods from warehouse to store, so they decided to reduce the cost. To reduce the distribution cost, Wal-Mart expanded their distribution centers, making it easier and quicker for deliveries to reach stores. With over 140 distribution centers, Wal-Mart has moved over 5.5 million cases of merchandise in one year. With the prices low on products and low distribution cost Wal-Mart can continue to uphold its ideals on low cost and low price. 3. Culture. From the founder, Sam Walton, all the way to the lowest employees at Wal-Mart, culture is present.

The culture of Wal-Mart, created by Walton, was the thought of treating each employee, no matter pay level, as a partner within the corporation. The culture of Wal-Mart is one that is nearly impossible to reduplicate. Wal-Mart not only shows culture within each one of their employee’s, but by also being a big contributor to numerous charity organizations. 4. Logistics systems. Wal-Mart uses logistic systems to create “people systems.” With these systems Wal-Mart is able to understand and create different systems comprised of people, all over the world, to come together to produce cost cutting technologies, ideas, and ways of life amongst, not only themselves, but their suppliers also. With a service oriented world, Wal-Mart has been able to capitalize by creating a system with low prices, and low cost. Wal-Mart has not only stayed up to date with its technologies, but some would even say stay a step ahead of advancing technologies.

Low cost operations, distribution, culture, logistic systems, and environmental awareness have created a corporation that has excelled on every level. Even with all of the controversy over Wal-Mart and its competitors, Wal-Mart is definitely the business on top. I am sure Sam Walton could never comprehend what kind of business Wal-Mart would become, but after all these years Wal-Mart still holds the values of its founder and once CEO, Sam Walton, and with these core competencies it is hard to imagine anyone who could create a better and more successful corporation. 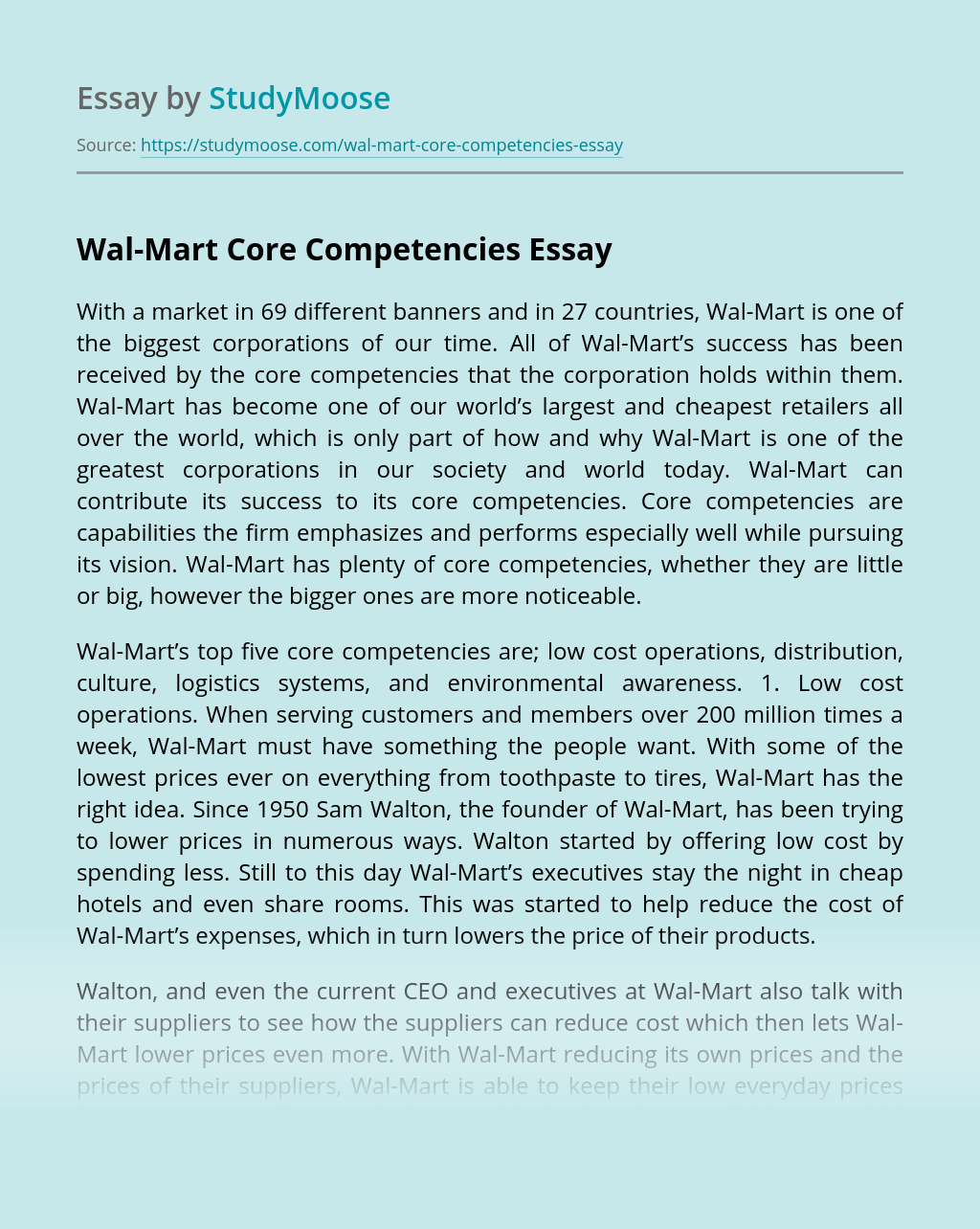 Of the many crimes that are present in this day and age, one that not only vandalizes the property, but as well as historical background is that of art theft. A crime that has taken away the sanctity of churches as well as many other religious and historical sites. Thefts have ranged from WWII (World...

“OPEC. As a. CARTEL”. There are 2 sort of extreme market structure and they are best competitors and imperfect competition. In a completely competitive market there are numerous varieties of sellers and many numbers of buyers offering and buying uniform products, for that reason there is very little impact of a single buyer or seller...

1. What is the ‘naming of parts’ that the title of the poem refers to? The naming of parts refers to the ri?e lesson in the poem, with the soldiers being taught about the parts of the ri?e. 2. The ?rst stanza identi?es the timeframe of this poem. Explain why ‘yesterday’, ‘today’ and ‘tomorrow’ might...

View sample
The Day I First Rode a Go-Kart

It was a good few weeks into the summer holidays of three years ago, and I was eleven years of age. I was with my family on a vacation in North Wales, situated right near the sunny beaches of a town called “Pwllheli”. That summer we had rented out a wooden lodge from a dear...