W.T.J Mitchell’s The Photographic Essay: Four Case Studies is a very descriptive short essay that defines what constitutes a photographic essay and what components go along with it. Mitchell’s thesis states that since photography is a language and text is a language the two need to be combined so the observer will have a better chance in finding the true “story”, hence the “photographic essay”. He uses clear examples of ways in which different photographic essays are constructed and the positive and negatives that go with them.

Don't use plagiarized sources.
Get Your Custom Essay on W.J.T. Mitchell Photographic Just from $13,9/Page

The components are: Spy and Counter-spy; Labyrinth and Thread; Voyeurism and Exorcism; Exile and Return. Mitchell’s first subtitle is “Spy and Counter-spy”. A great example in defining what this means is “judging a book by its cover”. When one looks at a photo without text there is a good chance that the observer will make assumptions and those assumptions may be wrong. Without text it is as if a person is spying into a person’s house and making a story of how they live without having the “true story”.

Spying is simply an observance, but without facts behind the spy many false accusations can and will be made. Mitchell’s second subtitle is “Labyrinth and Thread”. Mitchell doesn’t believe that photos need to be in straight order they can be in a “maze” but Mitchell is very adamant that if the photos are not in order they must have words to thread them together. Mitchell’s third subtitle is “Voyeurism and Exorcism”. Voyeurism is many times defined as a “peeping tom”. The main characteristic of a voyeur is a person who spies but does not relate directly to that of which they are observing. In this case in terms of photography and text Mitchell’s concern is that the text and the picture do not relate. Mitchell uses exorcism in hopes people will get to the root of the photo and pull out and factually write the truth. In Mitchell’s fourth subtitle “Exile and Return”, he clearly states on page 362 “Exile is a series of photographs without text.” What Mitchell is saying in terms of photography is that exile is written work from an outsider’s point of view on a photo or photos. Mitchell prefers to see essays and photos be from the same perspective.

This mean that the photo and the text need to tell the same story. They need to be from the same perspective, hence the “return” from “exile”. Mitchell’s essay (although very hard to understand in many ways) is very clear about one thing, a photographic essay is not a novel, lyric or narrative. A photographic essay is the use of words and photos that both contain language and the hope is that together they can construct the truth. His subtitles are his way of using examples of what to watch for to make sure the truth is revealed. Mitchell focuses a lot on seeing past the first “impression” of a photo and/or text. He leads one to believe that he truly wants the “whole story” or “whole truth” to be revealed in both text and photo and that it is truly unfair to make a judgment, positive or negative about the subject without such. 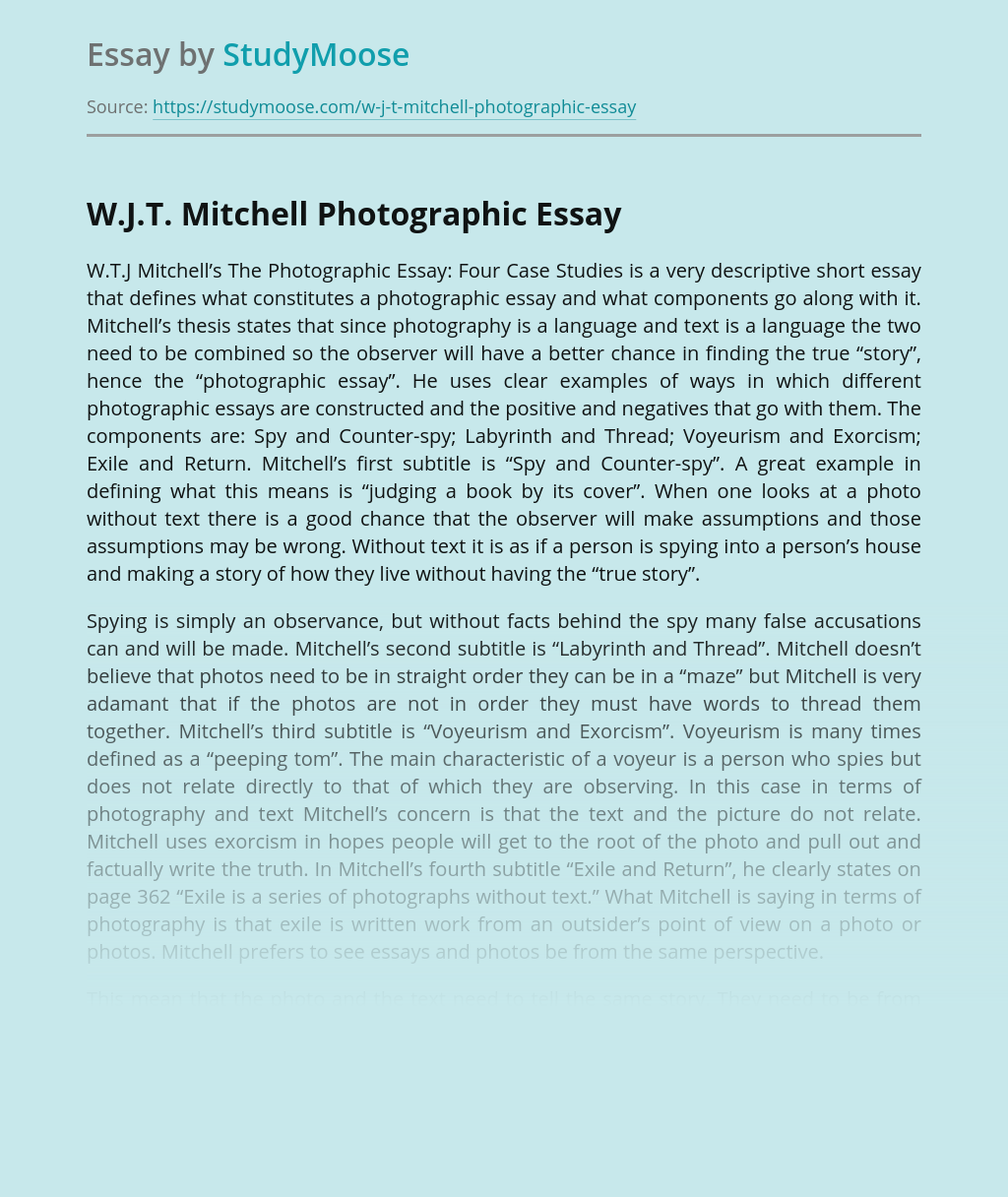 In theory, social media networks can be used to improve confidence and make a person feel closer to his/her peers in their social lives. Teenagers in this day and age no longer live in a world of handwritten notes passed back and forth in class. They are living social lives on a totally public online... VIEW ESSAY

The core exhibition will be based on the work of two chosen photographers due to the inability to investigate a larger number , this is because they are too many and wide spread that an attempt to look at all of them would be almost impossible , costly and time consuming. The programme will show... VIEW ESSAY

View sample
Get Essay
How to Take a Good Photograph?

* Always remember that: the most fundamental element in taking a good photograph is composition. Modern automatic cameras can sort out focusing, lighting and other matters for you, but you have to chose where to point the camera and how to compose the picture. So take a few seconds to choose a good composition taking... VIEW ESSAY

Ansel Adams was born February 20, 1902, in San Francisco, California. Ansel took an interest in music at an early age. He taught himself how to play the piano and delighted in the environments of nature. In 1916, he and his moms and dads went on a trip to Yosemite National Park where he received... VIEW ESSAY

Digital cameras allow computer users to take pictures and store the photographed images digitally instead of on traditional film. With some digital cameras, a user downloads the stored pictures from the digital camera to a computer using special software included with the camera. With others, the camera stores the pictures directly on a floppy disk... VIEW ESSAY