Each line of this poem represents Auden’s ideas of a great memorial for W B Yeats which is supported by the intentionally placed words, punctuations and innuendos. In the first few line of stanza stanza one Auden starts off by recreating what the present condition was like at the time of his death to create a gloomier atmosphere to get the readers attention. He does this in most of his poem, creating an atmosphere to get the readers attention such as now the leaves are falling fast.

“Now the leaves are falling fast” Auden recreates very windy atmosphere to start of the poem, to set up the lament which is “Nurse’s flowers will not last;” Auden poems are always well structured. And in refugee blues, the last stanza “Stood on a great plain in the falling snow; Ten thousand soldiers marched to and fro: Looking for you and me, my dear, looking for you and me.” Is creating the scenery where no one can hide, a vast area where any other color would outstand the plain white snow therefore this last stanza is a very atrocious scenery for those experiencing it.

Auden is always keeping the readers interested through different style of writing.

Punctuations used in the first stanza creates a clearer view of what the poet wants to express. The pauses “The brooks were frozen, the airports almost deserted,” this is a clear structure that would urge the readers with energy to keep on reading. He also does this in control of the passes.

Starts off the poem with a series of pauses to keep the audience attention “ Control of the passes was, he saw, the key” Auden was trying to create drama and add meanings to this line. And though aware of our rank and alert to obey orders “Watching with binoculars the movement of the grass for an ambush” the pause at the end of this line is a very strong pause that is trying to create a surprise for the readers.

The language he uses in the first stanza are very strong. The poem starts off with “he disappeared in the dead of winter” introduces W. B. Yeats disappearance (death). The power of the choice of words he picked in this line is the beginning of the a highly dramatic scene, a scene to fill show the world what a man W. B. Yeats was. These type of language is often used by W H Auden in his other works such as Though aware of our rank and alert to obey. In the second stanza he starts off with “About the tall white gods who landed from their open boat,” creating a highly dramatic scene with the specific words he picked. In this poem Auden is trying to recreate what the slaves saw before them a man who are more advanced than them who claims that they are more superior. Thus Auden’s language in most of his poems are words which can create a highly dramatic scene which can catch the readers attention.

The second part of the poem, Auden criticizes W.B. Yeats and states facts such as “you were silly like us;” “Now Ireland has her madness and weather still,” the second part of this poem is more to showing the world what life really is. No human is immortal nor can he cheat death, as the earth receives Yeats, does the world itself move on. In this stanza Auden emphasizes on human imperfections and suggests the coming generation to make a new verse to turn the world into a peaceful meaning poets utopia one.

The Last part of the poem is moreover a mix of a eulogy, criticism and a teaching for both poets and everyone who are alive. The language Auden uses emphasizes what he means and what message he wants to get out there. As the poem starts of with “Earth, receive an honoured guest: William Yeats is laid to rest.” Honoring his death by stating that Earth itself received an honored guest and it is also the first time where Auden uses William Yeats name throughout the poem.

Then criticism comes “Let the Irish vessel lie Emptied of its poetry” this just states that Yeats is an ordinary Irish man remembered not as Yeats but Irish and emptied of its poetry. As the readers read on, they will come across “Sing of human unsuccessful In a rapture of distress;” this is the teaching and as well criticism because Yeats write poems on fairytales because he believes in these things but Auden disagrees by putting this innuendo in by stating that write more reality for it may teaches other people what to do and it will be easier for them to relate to these poems.

Overall, Auden uses a lot of grandiloquent imagery through his language, punctuations and the well-built structure to create a perfect lament and such as. Auden’s poems are realistic, he wants the world to be able to relate to his poetry. He does not want to remembered but he wants his work to be remembered hence why he writes poems which are both the intellect as well as inspiring a visceral connection to language that few people can create, much less inhabit. 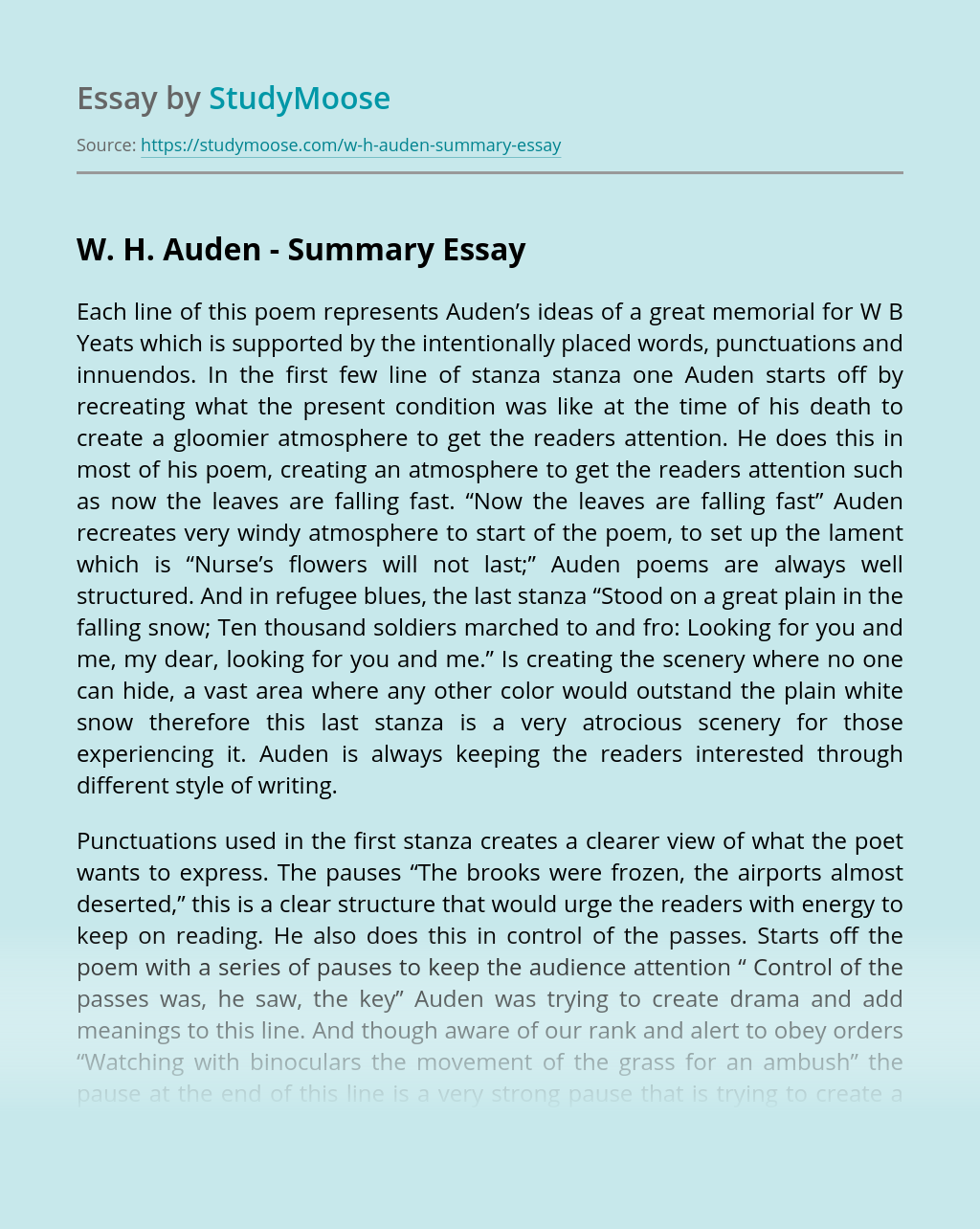