The poets of both ‘Vultures’ and ‘What were they Like? ’ present people in a very interesting way. ‘Vultures’ is a poem not just about vultures and the commandant, but rather explores whether there is hope because there is love everywhere, or whether there is despair, because even though love is there, evil is still always present. However, in WWTL, Levertov is obviously focusing on the effects of the evil of people rather than questioning the nature of evil itself in people.

Don't use plagiarized sources. Get your custom essay on
“ Vultures Comparison with What Were They Like ”
Get custom paper
NEW! smart matching with writer

To begin with, Achebe relies heavily on juxtaposition and contrast to represent the co-existence of love and evil in people. The ‘commandant’ is described as having ‘human roast clinging rebelliously to his hairy nostrils’. Not only does this imply that the commandant has animalistic qualities, but also the powerful imagery successfully communicates to the reader how much evil a human can contain, that even the smell of humans literally cooking is ‘rebelliously’ hanging on to the man’s nose.

Yet nevertheless, he can still stop at the ‘wayside sweet-shop and pick up chocolate for his tender offspring’.

This heavy and blindingly obvious contrast is clearly showing how yet there is still a ‘glimpse’ of tenderness and love, like the vultures he describes. Moreover, this encapsulates this feeling of despair of how even the most vindictive of human beings is still capable of love. Alternatively, the ‘roast’ used to describe the burning Jews and the word ‘tender’ used to describe his child both suggest at meat.

This possible link could show that now matter how much love he shows to his child, it will never outweigh his unforgivable evil nature.

However, Levertov’s contrast is shown in the tone of the questions and the manner of the answers. The question ‘had they an epic poem’ can be seen as ignorant in the sense that it gives the sense that the questioner – most likely of a Western society – uses the traditional benchmark of literature to judge a society, and the idea is invoked that the Vietnamese society is looked down upon. However, the person being asked the question gives unexpected responses.

The short initial answer of ‘It is not remembered’ immediately evokes that this person is avoiding the question, like they do not want to answer it and wants to say what the questioner does not really ask about. This is echoed in the last line: ‘Who can say? It is silent now. ’ Levertov uses two short, blunt sentences and seems to answer the initial question of ‘What were they like? ’ with another question, which gives an unexpected answer of: it does not matter. The society, culture and people that existed are no longer.

They are gone; burned; destroyed; dead, and underlines the futility of asking the questions in the first place and to me, it seems as though Levertov is angry not only at the American government for the destruction, but also at those at home, sitting and complaining about it, yet at the same time, doing nothing. Upon evaluation, Levertov clearly portrays how war renders the waste of humanity and the destruction of civilization and culture. Furthermore, both poets use powerful imagery to underpin their portrayal of the people, Achebe describes how love enters the ‘charnel house’ to ‘tidy it and coil up there’. Coil’ immediately connotes a snake and this perhaps suggests that love is viscous and insidious. However, the description of love in the charnel house could alternatively underpin yet again the feeling of hope – even in the most dreary of places, love can still ‘pick a corner’ there. Effectively, the reader is allowed to understand the complex paradox that Achebe here underlines. On the contrary, the powerful imagery used by Levertov is used to present the valid bitterness that the Vietnamese people feel.

The person replies ‘laughter is bitter to the burned mouth’. Here, the word ‘laughter’ feels out of place as the ‘burned mouth’ emphasises and exaggerates the pain and suffering endured by the Vietnamese. The word choice is also interesting – the use of the ‘mouth’ is unusual as we are normally told of a burned hand or leg, and in my opinion, this is extremely effective, as this emotional diction reflects how the Vietnamese society was shattered and how all is lost and that indeed ‘there is an echo yet’.

The alliteration of the dissonant sound ‘b’ also encapsulates the shear pain that they feel and also, when the reader makes the ‘b’ sound, our lips are violently forced together and we can imagine what it would feel like if our mouths were burned also. In summary, both these poems greatly reflect people in different ways. Whilst ‘Vultures’ seems to reflect upon the ambiguous nature of humanity (and even animals), WWTL clearly and successfully imparts the fragility and demoralised culture of Vietnam.

Vultures Comparison with What Were They Like. (2020, Jun 02). Retrieved from https://studymoose.com/vultures-comparison-like-new-essay 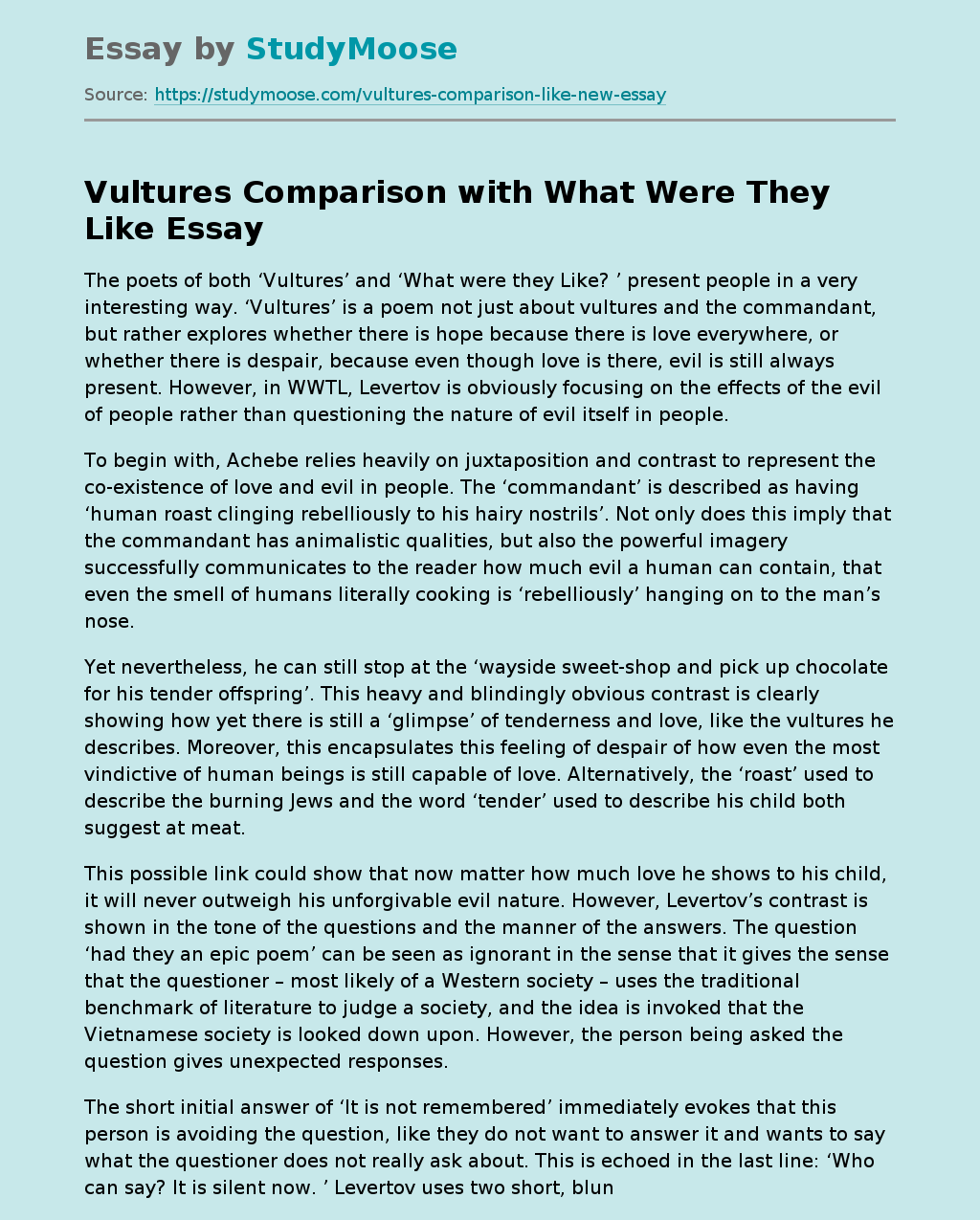