Voting in America has always been an option for citizens but over the years it has dramatically decreased in participation. In 2014 the low voter turnout was 46.7 % and discussions about making voting mandatory have been up for debate. Voting compulsory has been a law in multiple democratic countries for decades and has been very progressive. By making voting mandatory you get a more specific and better outcome of who citizens want/to prefer to elect. Additionally, this law would avoid electing candidates over a class bias effect due to the fraction of certain voting groups.

Don't use plagiarized sources. Get your custom essay on
“ Voting Compulsory in America ”
Get custom paper
NEW! smart matching with writer

Firstly, voting compulsory is beneficial because it gives an accurate solution to whom the citizens want to or prefer to elect. The majority of current voters are older and wealthier citizens compared to the subordinate younger and lower-income individuals with immigrant relations. According to Barack Obama “There’s a reason why some folks try to keep them away from the polls.”. When this younger intimidated group of individuals has no choice but to get a say in their future and presidency, there will be drastic changes to the outcome of the candidate.

Proficient in: 2021 storming of the United States Capitol

For example, according to a study in 2013 by Anthony Fowler, a public policy researcher at the University of Chicago: “When Australia passed compulsory voting, the Labor Party did better and you saw more progressive policies in line with what the working class was advocating for,”. Fowler told Business Insider “Compulsory voting would have large political consequences that would benefit the poor and working class.” Furthermore, if the united states of America have voting compulsory the number of voters will increase drastically (approximately 114% of people will vote compared to voters in 2014) and will make a more accurate election.

In conclusion, voting compulsory has a progressive effect on other democratic countries, and multiple studies benefit America. It will benefit policies in line with the working-class advocates and the future generation(s) of our country. Voters have the right of who they wish to elect, by making their vote mandatory gives them the obligation to have to choose wisely of who they think is going to have a positive effect as the president. Therefore, compulsory voting is a solution to the low voting percent and towards a great democracy.

Weller, Chris. “Half of Americans Probably Won’t Vote – but Requiring Them to Would Change That.” Business Insider, Business Insider, 7 Nov. 2016, www.businessinsider.com/compulsory-voting-what-if-americans-have-to-vote-2016-11. 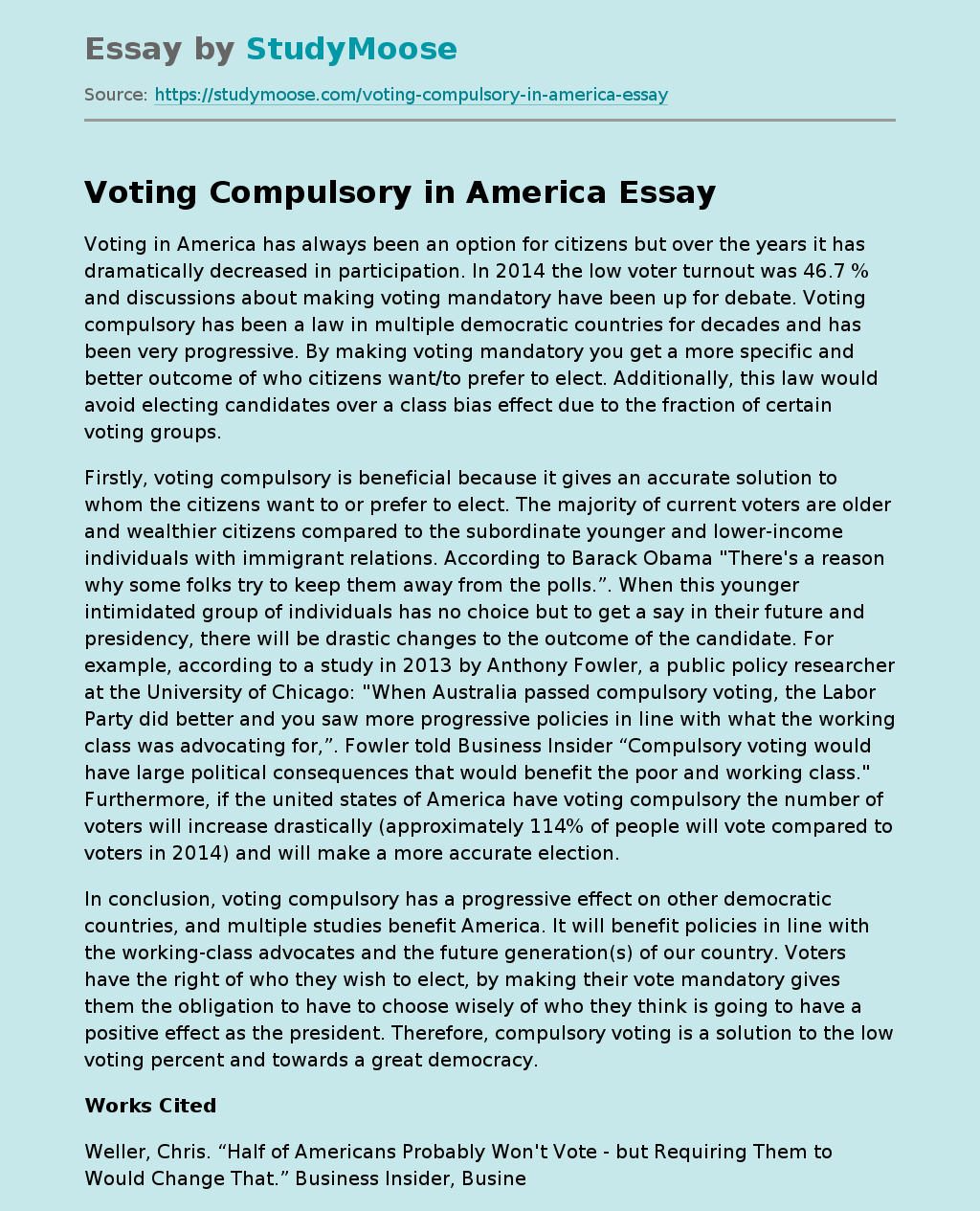