Volcanoes are pressure valves that release energy from deep within the Earth.Beautiful and powerful,awe-insipiring and deadly,they are spectacular reminders of the dynamic forces that shape our planet. Volcano – a fissure or vent through which molten rock material, or magma, and gases from the interior of the Earth erupt on to its surface, and the landform which is produced as a result of this eruption. The word “volcano” comes from Vulcano, one of the volcanic Lipari Islands in the Mediterranean Sea, and the place where, according to Roman mythology, Vulcan, the god of fire, kept his forge.

Turn in your highest-quality paper
Get a qualified writer to help you with
“ Volcanoes Paper ”
Get high-quality paper
NEW! AI matching with writer

The processes that creates volcanoes and other volcanic structures are called volcanism or vulcanism.

How a volcano is formed

A volcano is formed when plates hit each other. One of the plates goes under the other. This is where the earth heats and melts the rock into magma and gases. This can happen as deep as 320 kilometers below the earth. Magma settles in pools or chambers near the surface.

This is where eruptions take place.

Some of the different types of volcanoes

With an explosive force 13,000 times the power of the atomic bomb that destroyed Hiroshima, the 1883 eruption of Krakatoa killed more than 36 000 people and radically altered global weather and temperatures for years after.

The eruption was so violent and catastrophic that no active volcano in modern times has come close to rivalling it.  Official records of the time show that the 1883 eruption, together with an enormous tsunami it generated, destroyed 165 villages and towns, seriously damaged a further 132 and killed 36,417 people. Krakatoa had an extraordinary effect on the planet. Average global temperatures following the eruption fell by as much as 1.2 C, as the huge quantities of sulphur dioxide pumped into the atmosphere resulted in clouds that reflected incoming light from the sun.Krakatoa was dormant until May 20, 1883, when it erupted catastrophically.

By August 11, three vents were regularly erupting on the volcano. During this time tides were unusually high, and windows suddenly shattering were common. The August 26 eruptions occurred at 5:30 am, 6:42 am, 8:20 am and 10:02 am . The last of these eruptions opened fissures in the walls of the volcano, allowing sea water to pour into the magma chamber. The resulting explosion of superheated steam destroyed most of the island. The sound of the explosion was heard as far away as Australia 3500 km away, and the island of Rodrigues near Mauritius 4800 km away. It is the loudest-ever sound in recorded history.

The 1883 eruption was amongst the most severe volcanic explosions in modern times . Concussive air waves from the explosions travelled seven times around the world, and the sky was darkened for days afterwards.

Since the 1883 eruption, a new island volcano, called Anak Krakatau (“Child of Krakatoa”), has formed in the caldera of krakatoa. However, the island is still active, growing at the rate of 13 cm per week. The effects an erupting volcano has on the surrounding communities All types of volcanoes cause deaths, loss of jobs, destruction to homes when they erupt. Lava and lahars/mudflows destroy plants/trees and people who grow crops nearby can have their business wiped out if the lava reaches their farmland. People living nearby suffer from lung diseases more commonly because of the smoke and ash being released. On the good side, volcanoes attract tourists so local people have more job opportunities or can collect sulphur and sell it to make money. There is geothermal energy available from the natural heat underground which provides a source of renewable energy. After the eruptions, soil is left very fertile so it is ideal for farmers to use for growing plants.

The advantages and disadvantages of living near a volcano

Sea – during a volcanic eruption earthquakes happen, and tsunamis may be created. Also, if it is a volcanic island, the island may be destroyed, and there is no escape. Lava flow – these are very slow moving, but destructive as they cannot be stopped and they set fire to everything in their path. Pyroclastic flow – these are impossible to outrun, travelling at about 300 km/h, and are extremely destructive Mudflow/lahar – these are mud rivers that have the consistency of cement, and destroy everything in their path, including buildings

Sea – there tends to be abundant sea life near volcanic islands, so there will be lots of seafood Fertile soils – The volcanic ash from eruptions is very fertile and good for farming Tourism – Volcanos are good for tourism, bringing towns lots of money Quarry – There are lots of stone deposits from volcanic eruptions, which can be converted into quarries. Geothermal energy – There will be natural vents near the volcano, in the ground which can be used to provide geothermal energy. Location of some African volcanoes:

Located in northeastern Tanzania, Mount Kilimanjaro is the highest point in Africa. Though it lies in the tropics, its peak is covered with ice and snow year-round.

Kilimanjaro seen from the east

Mount Kilimanjaro is made up of three inactive volcanic cones. Kibo is in the center, Mawensi is to the east, and Shira is to the west. Kibo is the highest peak, reaching a height of 5 895 meters.

Mount Visoke (also Bisoke) is an extinct volcano in the Virunga Mountains of the Albertine Rift, the western branch of the East African Rift.

Mount visoke viewed from the Rwandan side of the border

It seperates Rwanda and the Democratic Republic of the Congo, but the summit is located in Rwanda. The mountain reached a height of 3 711 metres before becoming extinct.

Dabbahu Volcano (also Boina, Boyna or Moina) is a volcano located in the remote Afar Region of Ethiopia. This stratovolcano is part of the Afar Triangle.Its elavation is 1 442 m. 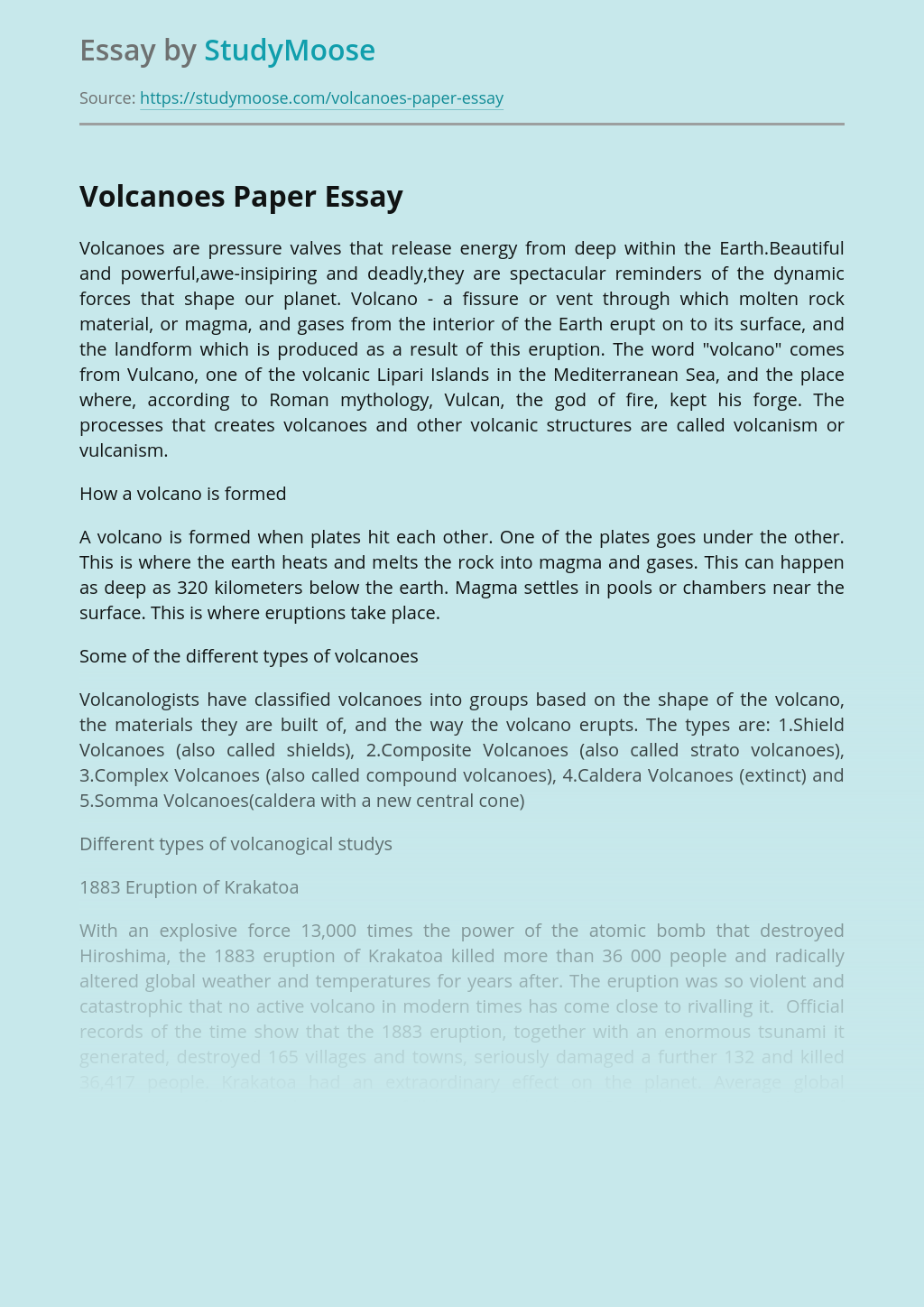 Turn in your highest-quality paper
Get a qualified writer to help you with
“ Volcanoes Paper ”
Get high-quality paper
Helping students since 2015
Stay Safe, Stay Original